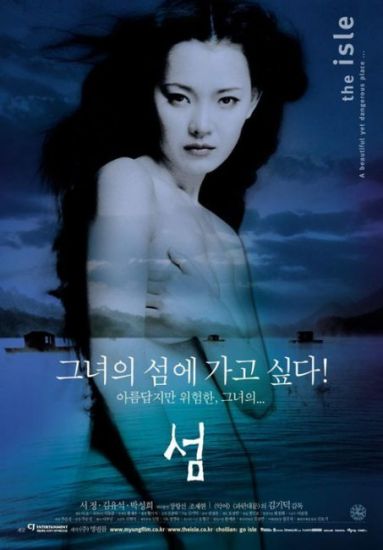 The Isle is a 2000 South Korean film written and directed by Kim Ki-duk. The film was the fifth film made by Kim, and the first to receive wider international acclaim for his recognizable style. It also became notorious for being difficult to watch, with stories of viewers vomiting or passing out during the more gruesome scenes when the film premiered at the Venice Film Festival. The Isle stars Seo Jeong and Kim Yu-seok as an unlikely couple who develop a love for each other despite the unusual circumstances.

Seo Jeong plays the mute Hee-jin, who operates a fishing resort, where she rents out small floating cottages and ferries her customers back and forth between land and the floats, controlling the only means of transport around. She also dispassionately takes care of her customers' needs by selling supplies, providing prostitutes from a local tabang or occasionally acting as one herself. However, when a man running from the law, Hyun-shik (Kim Yu-seok), comes to the resort, a bond starts to form between them.

At the start of the film, Hyun-shik arrives at the resort and is ferried to his float by Hee-jin. There is nothing unusual about their business relationship from the onset, but eventually Hee-jin is intrigued by Hyun-shik's obviously troubled past. When visiting his float one time, Hee-jin still resists Hyun-shik's forceful advances but does call in a prostitute to service him. Hyun-shik, however, only wants companionship from the prostitute and a relationship starts to form between them.

The two developing relationships between Hyun-shik and the prostitute and Hyun-shik and Hee-jin move the plot. Hee-jin looks after Hyun-shik, even saving him from two suicide attempts, the second one accomplished gruesomely by swallowing a string of fish hooks. The prostitute continues to take more and more time off her schedule to visit Hyun-shik, oblivious to his troubles and eventually Hee-jin becomes jealous. During one visit, Hee-jin ferries the prostitute to an empty float instead of Hyun-shik's,ties her up and duct tapes her mouth shut, which eventually leads to her death as she falls into the water. The prostitute's pimp, who comes to find out what's happening, is also killed by Hee-jin.

After the murders, Hyun-shik's and Hee-jin's relationship stalls. Hyun-shik wants to leave the resort, but Hee-jin, who controls the only boat won't let him. When he attempts to swim out, Hee-jin has to save him and take him back to his float. Hyun-shik takes the boat and is set to leave. Hee-jin apparently attempts suicide in an effort to stop him by stuffing fish hooks into her vagina and falling into the water. This time it's Hyun-shik's turn to save her, by reeling her in with the still attached hooks.

Hyun-shik and Hee-jin continue their troubled relationship. A prostitute accidentally kicks a man's rolex into the water, infuriating him. He calls divers to have them retrieve the watch. The divers discover the bodies of the prostitute and the pimp while Hee-jin and Hyun-shik wordlessly take off on his float. The film concludes in enigmatic fashion.