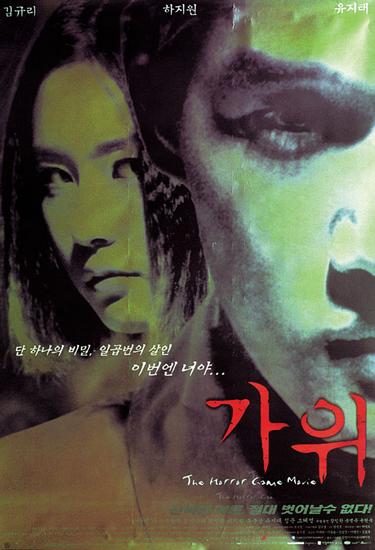 Nightmare (Gawi; aka Horror Game Movie or Scissors) is a South Korean horror film, released in 2000. It stars Kim Gyu-ri, Ha Ji-won and Choi Jeong-yoon, and was directed by Ahn Byeong-ki, who also later directed Phone (2002), Bunshinsaba (2004) and APT (2006)

Hye-jin's homecoming should have been a joyous occasion. She was especially happy to see her childhood friend again, the shy Eun-ju. However, when a secret is revealed, harsh words are exchanged. These words deeply affect Eun-ju and, in the next scene, we see her plummeting from a 30-story building. In a flashback provided by Sun-ae, we learn that the ghost of Eun-ju is hunting down all of Hye-jin's friends and killing them. Is this possible or is a more worldly force at work? What is this mysterious tape that everyone is asking about?