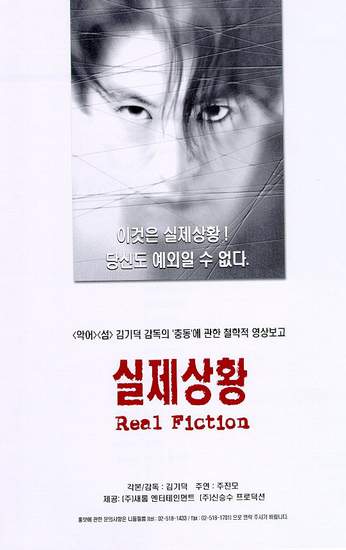 Real Fiction (Silje Sanghwang) is a 2000 crime/drama film from South Korean director Kim Ki-duk. It stars Ju Jin-mo, Kim Jin-ah and Son Min-seok. Its runtime is 69 minutes. It was shot entirely in real-time, with no retakes, on a mixture of low quality video and purposefully "dirtied" film. These combine to give it an intensity of emotion which is normally only found in live performances, and a simultaneous mode of abstract expression which is normally only possible with comics.

Real Fiction follows a South Korean artist as he systematically seeks out, and then guns down his real or imagined enemies.