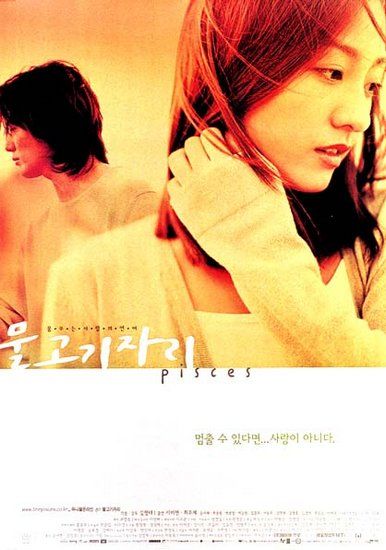 For Aeryeon (played by veteran actress Lee Miyeon), a video shop owner, her only friends are movies and a couple of tropical fish she raises in the shop. The other joy of hers is to select quality videos for her customers, which is interpreted as part of her effort to overcome solitude. Then one day comes attractive and handsome Dongseok, a lover of French movies and music. From that time on, she waits for him every day.

She hears from him that he composes music and prepares to release an album in order to make a debut as a singer, but has been rejected many times by producers. Although she confesses her love to him, he says he has a girlfriend to marry. Aeryeon meets Dongseoka¡'s girlfriend and tells her, "You can meet other boyfriends than Dongseok.

But for me, Dongseok is the only lover. Please leave him." Pisces is the 12th sign of the zodiac, represented by two fish, and believed to affect the character and life of people born between Feb. 21 and March 20. For the people of Pieces, love never stops, even at the face of rejection. If it stops, it is not love. The color of blue and yellow appears alternately in this film, with jazz music as the backdrop.

The film has something that touches viewers' heartstring, more so than other films of its kind. Newcomer director Kim Hyeongtae superbly portrays the psychology of a female character abandoned by her love.