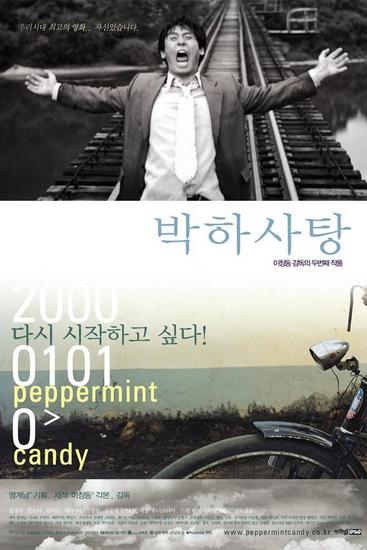 Peppermint Candy (2000) is the second feature film from South Korean director Lee Chang-dong. The movie starts with the suicide of the protagonist and uses reverse chronology to depict some of the key events of the past 20 years of his life that led to his death.

The film was received well, especially in film festivals. Spurred by the success of Lee Chang-dong's directorial debut, Green Fish, Peppermint Candy was chosen as the opening film for the Pusan International Film Festival in its first showing in 1999. It won multiple awards at the Karlovy Vary International Film Festival and won the South Korean film industry's Grand Bell Award for best film of 2000.

At the beginning of the film, in the year 1999, the main character Yong-ho wanders to a reunion of his old student group. After causing some general mayhem with his deranged antics, he leaves and climbs atop a nearby train track. Facing an oncoming train, he exclaims "I want to go back again!". What follows is a series of prior events in the main character's life that show how he became the suicidal man portrayed in this scene.

The first flashback takes place only a few days before Yong-ho's death. At this point he is already clearly suicidal, confronting his former boss and ex-wife Hong-ja before the husband of his teenage crush Sun-im pays him a surprise visit. Yong-ho is taken to visit a comatose Sun-im in a hospital.

The next flashback shows Yong-ho's life five years earlier. At first glance, he seems to be a rather successful businessman, but the problems in his life become clear when he confronts his wife, who is having an affair with her driving instructor. Yong-ho is unable to claim moral high ground, since he is also shown having an affair, with an assistant from his workplace. Finally, Yong-ho is shown along with his wife at their new house, having dinner with his colleagues, where it becomes apparent that the marriage isn't working.

On the third flashback, Yong-ho is shown as a police officer in the year 1987. At the beginning, he is shown along with his pregnant wife at a mundane scene. After this, he is shown apprehending a witness and brutally torturing him for information about another man's whereabouts. This leads Yong-ho to Kunsan where he along with his fellow police officers capture the wanted man. While in Kunsan, Yong-ho is distracted from his work by fruitlessly trying to search for Sun-im and instead ends up on a one night stand with another woman.

The following flashback shows Yong-ho when he is just starting his career as a policeman and is pressured by his peers to torture a crime suspect, presumably a student demonstrator. Shortly afterwards, he is visited by Sun-im. Yong-ho coldly and cruelly dismisses her by feigning interest in another woman, his future wife Hong-ja. At the final scene of this sequence, Yong-ho is shown sleeping with Hong-ja, whom it is shown he never truly cared about.

During the next flashback, it's May 1980 and Yong-ho is performing his mandatory military service. While Sun-im is trying to visit him, his company is taken to quell a student demonstration. Yong-ho gets shot in the leg and is told to stay behind. This leads to a scene where he confronts a harmless and presumably innocent student, whom he accidentally shoots (and kills).

The last flashback shows Yong-ho as a part of the student group that reunited at the beginning of the movie. This is also where he meets Sun-im for the first time. The scene poignantly shows the innocence that Yong-ho had, before his country molded him into the violent and jaded man he is at the start of the film by pitting him against his friends.