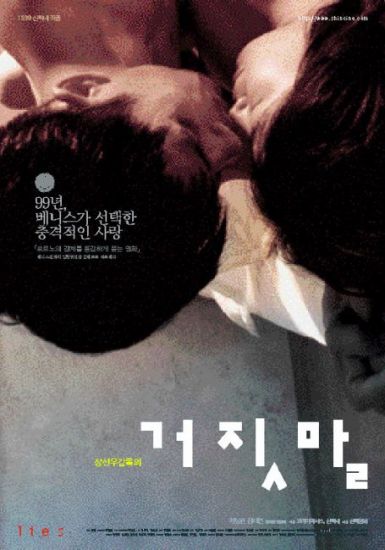 Lies (Gojitmal) is a controversial South Korean film depicting a sadomasochistic sexual relationship between a 38-year-old sculptor and an 18-year-old high school student. It was the debut film for both of its stars; Lee Sang-hyun is a sculptor and Kim Tae-yeon, a fashion model.

The film was adapted from a South Korean novel by Jang Jung-il that was banned immediately after publication in 1996 and earned the author several months in prison; director Jang Sun-wu had previously filmed one of Jang's novels. Excerpts from interviews with the author and cast are sometimes inserted between scenes.

A high school senior, Y, is friends with another girl who has struck up a correspondence with a middle-aged artist, J. After talking to him on the phone, and determined not to lose her virginity through rape as her two sisters did, she decides to have sex with him and a meeting is arranged at a cheap motel. They have sex almost as soon as they enter the motel; though she is a virgin she gives him oral and anal sex. In their next rendezvous he tells her about his interest in sadomasochism and she allows him to beat her on her buttocks before they have sex again.

They arrange regular trysts where he beats her more fiercely and with a wider array of implements. While at first she only goes along to make him happy (telling her friend that she desires whatever he does) she eventually likes being beaten. At home, J's relationship with his wife deteriorates when he begs her to beat him; she refuses, calling him a pervert as we learn that his sexual desires have been a strain on their marriage for years.

After an unusually harsh beating Y becomes angry, and he offers to let her beat him. Intrigued, she quickly assumes the dominant role and from then on they take turns beating each other. Their encounters become more frequent; though J pretends to be her art professor, Y's brother discovers the affair and sets fire to J's house. Y cuts her hair and drops out of university and he leaves home, as they live in hotels having sex every night; they carve tattoos onto their inner thighs. When Y's brother dies in a motorcycle accident and J runs out of money, she leaves, though he begs her not to; they go their separate ways as he returns to his wife.

Years later we find the man and his wife living together in Paris when he receives a phone call. She is traveling to South America and has a stopover in Paris. They meet in a hotel, where she changes into her old school uniform and beats him with the handle of a pickaxe. they never see each other again; when his wife asks him about the tattoo, he lies.