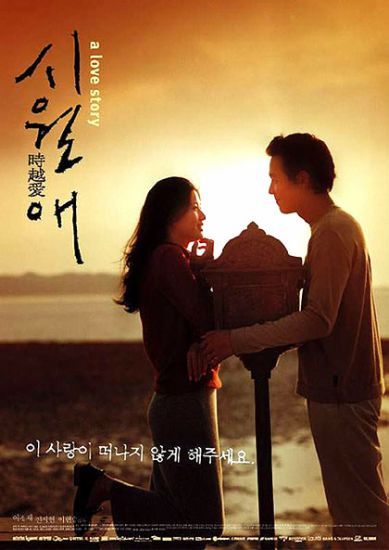 Il Mare (Hangul, RR: Siworae) is a 2000 South Korean film, starring Jun Ji-hyun and Lee Jung-jae. The title, Il Mare, means 'The Sea' in Italian, and is the name of the seaside house which is the setting of the story. The Korean title, siworae is the Korean pronunciation of Chinese characters, which means "time-transcending love." The two protagonists both live there two years apart in time, but are able to communicate through a mysterious post box.

The film was remade by Warner Brothers starring Sandra Bullock and Keanu Reeves and released in 2006 as The Lake House, which was co-produced by Sonny Mallhi, Amit Walia, and Chris Krapek.

According to the most popular interpretations of the film, there are two distinct timelines intertwined throughout most of the film. These two timelines are torn away from each other at the end of the film, causing the "bittersweet" nature of the ending.

The story begins with Eun-joo moving out of a house by the sea called "Il Mare". As she is leaving, she leaves a Christmas card in the mailbox, asking the next resident to please forward her mail to her. Sung-hyun, an architectural student, receives her card, but is puzzled, since he is the first resident at "Il Mare" and the card is dated 2 years in the future. After a series of back and forth correspondences, Eun-joo and Sung-hyun realize they are living 2 years apart, Eun-joo in the year 2000 and Sung-hyun in the year 1998. After some testing, Eun-joo and Sung-hyun discover that the mailbox at "Il Mare" is enabling their communication and they can pass objects through it.

Utilizing the mailbox, Eun-joo asks Sung-hyun to retrieve a tape player she lost two years ago, which he gets for her. After his father, a noted architect, dies, Sung-hyun asks Eun-joo to buy a book about his father, which she does. They decide to try a date together, with each person participating in his or her own time. Eun-joo "takes" Sung-hyun to an amusement park, where he follows her instructions on how to have a good time at the park. Sung-hyun "takes" her to a restaurant where she drinks a bottle of wine he left for her two years ago. Despite having a lot of fun on these "dates", they decide that they should try to meet in person.

Eun-joo and Sung-hyun plan on meeting in person at a beach where she has always wanted to build a house, two years in Sung-hyun's future. However, when Eun-joo goes to the beach, Sung-hyun doesn't show. She does see a house being built on the beach for an unknown architect's lover. When Eun-joo tells Sung-hyun that he didn't come, he is baffled about why he didn't show up; he doesn't think he would have forgotten such an important date.

At Eun-joo's work, she runs into her ex-fiance. They were going to get married, but he moved abroad for work, while she stayed in Korea. Due to the separation, they eventually broke up and he married another person; however, Eun-joo still loves him. This meeting shocks Eun-joo and in an act of desperation, she asks Sung-hyun to intervene and stop her fiance from leaving two years in the past. After sending the letter to Sung-hyun, Eun-joo suddenly realizes, on that day, she witnessed a car striking a pedestrian and killing him. Eun-joo rushes to Sung-hyun's architectural school and finds out that Sung-hyun was that pedestrian and the house being built at the beach was designed by Sung-hyun for her. She immediately rushes to the mailbox and sends a letter telling him not to go.

The final scene returns to the beginning of the movie, where Eun-joo is about to place her Christmas card into the mailbox at "Il Mare". A stranger approaches her with a letter in his hand, the letter that Eun-joo sent warning Sung-hyun not to go to the meeting. Sung-hyun did receive her warning letter and never went to intervene that day and was never hit by the car. Although this Eun-joo (the one who twice ignores him at the train station) has no memory of the correspondence, Eun-joo and Sung-hyun finally meet.