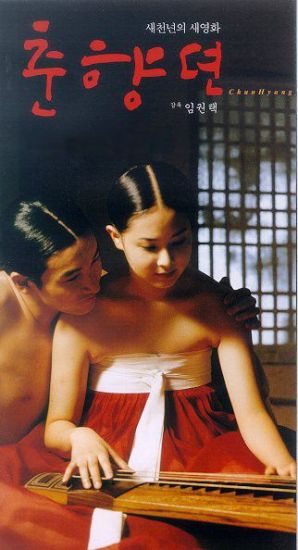 Based on the Pansori folk song of the same title, Chunhyang tells the tale of two star-crossed lovers who consummate their love after overcoming various obstacles. Mongryong, the son of a nobleman, falls in love with a beautiful maiden on a swing.

He learns that she is Chunhyang, the daughter of a retired kisaeng (equiv.to geisha) named Wolmae, but he pursues her despite her lower social status.Mongryong succeeds in winning the heart of Chunhyang and Wolmae and pledges Chunhyang as his life-long companion. Unfortunately Mongryong is forced to leave the side of his beloved when his father is summoned by the king's court. Sadly he leaves for the city with the promise to return as a court official.

One day a new governor, BYUN. Hakdo arrives in Namwon, the hometown of Chunhyang. Notorious for his insatiable desire for women, he orders Chunhyang to serve him after hearing of her beauty. When she refuses, BYUN tortures Chunhyang and throws her in jail. Meanwhile Mongryong passes the state exam with the highest distinction, whereby the king makes him his personal emissary, a post which grants him the authority to punish corrupt officials. Disguised as a vagrant and accompanied by his envoy, Mongryong heads toward Namwon with a vengeance.