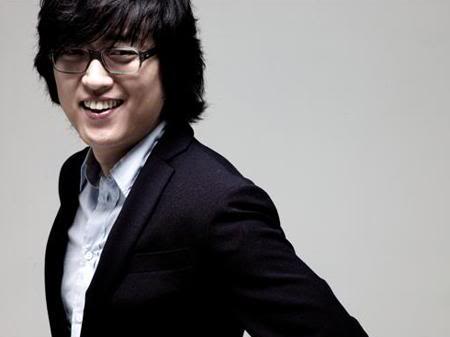 Kim Dong Ryul is a Korean musician, composer and singer. He was born in March 15, 1974 in Seoul. He is a popular artist who composes, arranges, writes lyrics, produces, and performs his own music. He has been active since 1993.

While majoring in architectural engineering in Yonsei University, he formed a duet 'Exhibition' with his close friend, Seo Dong-Wook. Kim Dong-Ryul composed their songs and played the piano and Seo Dong-Wook played bass guitar.

The duet became famous through an MBC university song festival in 1993. They won first prize and the special prize by the song 'In Dreams' which Seo wrote the lyrics and Kim composed. From those days, Kim started his music career of singing, composing, and writing lyrics.

Kim's first album 'An Essay of Memory', which famous singers, Shin Hae-Cheol produced, was released in 1994. Even though the duet were new figures in the world of popular music, they did the composing, piano, bass, computer programming. The album received positive reviews and climbed into the top ten chart, going on to sell over 600,000 copies.

In 1994, both members of the duet went into army service together in 1994. After finishing their military service, the duet released the second album 'Strangers' in 1996. The album was also produced by Shin Hae-Cheol, and the famous instrument players, Yi, Byeong-Woo, Kim Se-Hwang, Jeong Won-Young participated in their album, too. The second album also had positive reviews from critics but there was a plagiarism row about 'A Testament', one of the famous songs in the album. The song came under suspicion because of its similarity to 'The Girl who fell from the Sky', one of the background songs in the Japanese animation 'Laputa, the Castle in the Sky.' Experts decided that the main melodies, ways of using instruments were similar, so 'A Testament' became a dishonorable song for the duet.

In 1997, the duet decided to go back to normal school life. Then, they released the third album 'Graduation' with five songs which had special personal meanings for them. Especially, 'First Love' was composed by Kim Dong-Ryul when he was 14 years old and 'In Dreams' was the song that made the duet very popular.

After disbanding, his friend, Seo Dong-Wook became a normal student. But Kim Dong-Ryul said, "The only thing I can do is music." He made the project group 'Carnival' with Yi Jeok with whom he became close through the Jam concert of a popular radio program, 'At Starry Nights.' Both of them were 24, sing and make songs. But their music styles were very different. Kim Dong-Ryul's songs were a bit naive and standard classical ballads but Yi Jeok's songs were poignant and heretical.

There two people got together and made great songs of funk genre. They brought the world famous brass session team, Jerry Hey team and a Korean singer and jazz pianist, Kim Gwang-Min for funky style jazz ad lib of keyboard. They released the album Carnival in 1997. The main theme of the album was retro style. The album was a great success for them. They won the Golden Disc prize of Daily Sports.

After the success of Carnival, Kim composed several popular songs such as 'For a Thousand Days' for Lee Sueng-Hwan and 'Show' for Kim Won-Jun. In 1998 he released first solo album 'The Shadow of Forgetfulness' with a piano-based sound recalling early Elton John. About his solo album, critics wrote that he set up the new ballad style which had classical and polished melody and lyrics. After the first album, he held first solo concert on Christmas Day in 1998.

Even though he was a million-selling artist with his band Exhibition and Carnival, Kim decided to study music more. He entered Berklee College of Music in 1999 and majored in cinema music. While studying there, he wanted to make real Korean-style music and he became more interested in Korean traditional music and culture.

At the end of the first school year in the college, he made his second solo album 'Hope.' In this album, he used not only the London Symphony Orchestra but also 'Samulnori' which is a Korean traditional percussion quartet. In 2001, he released his third solo album 'Homecoming.' He continued to integrate Korean traditional music and classical sound. The critics commented on this album that it had ample and splendid sound and the atmosphere of all the songs was natural and stable.

After graduating head of his class, he came back to Korea and released his forth solo album 'Exposing' in 2004. His song "At Long Last" from his 4th album 'Exposing' topped the KBS charts in April, 2004. He tried to integrate some new style music such as bossa nova, samba, and popera in the album. His music became more comprehensive and mature. Especially, arrangements of the songs were much more refined than before.

He had the second solo concert in Seoul and Busan in August, 2004 and released the live recording album 'Invitation' in 2005. He put his music and experience of the past ten years into the first live recording album. From 2005 to 2007 he hosted the TV music program 'Kim Dong-Ryul's For You' and the radio program 'Kim Dong-Ryul's Music Island.' And he made a "best-of" albumn in 2007.

In 2008, Kim released his fifth album 'Monologue.' The album peaked at number one on the album-selling charts and sold nearly 100,000 copies. This record had a great meaning to Korean music industry because the volume of album sales had been very low. Most songs of the album became very popular among all the generations. The critics reviewed that he his lyrics and melody.

After his big success, Kim held three concerts in 2008. All the advance tickets of the concerts were sold out in less than 20 minutes. The concerts were full-scale in every way. He arranged each song again for the orchestra and designed the stages.

Volume 1 - Exhibition
Released: 1994-05
Tracks:
An Essay of Memory
Travel
Sky High
Nostalgia
My Thoughts About You
A Boy's Tree
In Front Of The World
Too Many You


Volume 2 - Strangers
Released: 1996-05
Tracks:
At The Confessional
Strangers
At The J's Bar
A Testament
On The Way To Meeting You
A Bird
Blue Christmas
The Truth In Wine
The Promise of Ten Years

Volume 1 - Carnival
Released: 1997
Tracks:
Carnival(Prelude)
A Roller coaster(In Carnival Land)
It Was Like That In Those Days
A Friend
A Doll Made Of Soap
A Toast
Vines
A Joke
Seize Her Feat. Seo Dong-Wook
Dreams of Geese

Thanks
Released: 2007-03
Tracks:
Thanks
An Essay of Memory)
Travel
Sky High
Too Many You
Strangers
At The J's Bar
A Bird
The Truth In Wine
Graduation
First Love
We
The Beginning
The Consideration
Miracle
A Partner
Hope
The Words Of Loving You
Shall I Love You Again?
Homecoming
At long last
Because you don't love me
Grabber Feat. Yi So-Eun
Behind incense
Volume 5 - Monologue
Released: 2008-01
Tracks:
Departure
About It
Old Song
Jump
Like A Child feat. Alex
The Concert
Nobody
The Figure From Behind
Let's Start Again
Melody
source: http://en.wikipedia.org/