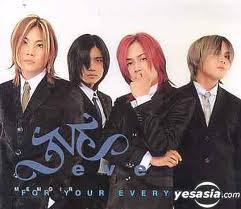 K-Rock band "Eve", led by Kim Seheon (b. 2 June, Seoul, Korea; Lead vocals), released their first album in 1998: they made their debut as a project group with Kim Seheon as their leader - four members including... Vocals:Kim Seheon + Guitar:Park Woong + Producer/Vocals: G. Gorilla (Goh Hyungi) + Bass: Kim Gun. Eve's steady efforts in creating music have shown us that they proved themselves to be recognized as a promising k-rock band.

Seheon started his music career as a leading role in an indie band named "Extasy" since 1989, but his official debut took place when he got a leading vocal position as Extasy emerged from underground and renewed their name into G.I.R.L. (Get Into the Rock 'n roll Legend) in 1996. Their official title song "Aspirin" swept over all the k-pop/k-rock charts the same year, and their debut album was recorded as number one in sales among all k-rock albums at the same time. Eve received one of the top 10 k-pop/k-rock musician awards from SBS in 1996.

G.I.R.L., however, had to split up after the release of their 2nd album, and Seheon made a decision to form a new rock band on the day of Christmas Eve in 1997. This is how they named their band "Eve."

Kim Seheon found G. Gorilla (aka Ko Hyun Ghi; b. 20 Feb.; producer/songwriter/vocals) while he was searching for new members to join in. As a producer/writer/arranger, Gorilla created a scent of the one and only "Rock Band Eve" for the first 4 albums.

Park Woong (b. 3 July; guitar) and Kim Gun (b. 7 Nov.; bass) also started their music career in indie rock bands, such as Athanasia and Rock World, before joining in with Eve.

However, G. Gorilla decided to break away from Eve and formed G. Gorilla Band, and Park Woong & Kim Gun also formed a band called Virus in 2002, after going through the twilight of stagnation in k-rock music industries.