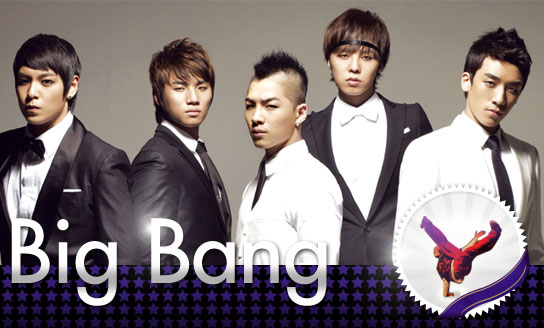 Big Bang is a very popular Korean boy band. Its five members are known as T.O.P, Seungri, Daesung, G-Dragon, and Taeyang. They were launched by the famous management company, YG Entertainment on August 19th 2006, as part of the company's 10th anniversary concert. Big Bang immediately received praise from critics, the public, and other singers for the members' outstanding talent.

On September 23rd, 2006, the group made their debut on the tv music show, "Music Core", but Big Bang became famous throughout the country even before their official debut, since MTV Korea had aired an eleven-episode documentary about the making of the band. So far, as many as 1 million copies of their albums have been sold and Big Bang is popular not only in Korea, but also in Thailand, Japan and other countries around the world.


The five members of Big Bang were the winners of an arduous singing and dancing audition process, which was screened on MTV Korea. The group has two rappers and three singers, and their songs are a unique blend of hip hop and pop songs. Big Bang's energetic catchy songs have earned them a large following that spans all generations. The members of Big Bang play a role in writing their lyrics, in composing their music, and in their choreography. Some of the members have also launched solo projects, appearing in musicals, TV dramas, and entertainment shows.


G.DRAGON has been training with YG Entertainment for 6 years, having joined the management group when he was only 13 years old. He is regarded as a skilled producer, and has worked on other singers' albums as well as Big Bang's.

During his childhood he appeared in movies and TV shows, but it was always his dream to become a singer. He takes his responsibility as the leader of the band seriously. He does not tolerate mistakes, but at the same time he encourages and supports the other members. He composed "Lies", "Look at Me, GwiSun", "Fool" and "We Belong Together". G-Dragon is considered by many to be the most fashionable member of the group, and many teenagers copy his flamboyant urban style.

T.O.P earned his status as one of Korea's biggest heartthrobs by stealing a kiss from Lee Hyori, one of Korea's most famous female singers, at the Mnet Km Music Festival. T.O.P has an attractive husky voice and is considered to be the most masculine in the group. However, he is actually very reserved and sensitive. He likes to be alone and his hobby is collecting action figures.

T.O.P. acted in the drama "Iris" alongside actors Kim Tae Hee and Lee Byung Hun, and he will appear in the upcoming drama "My 19 year-old" with Seung Ri, another member of Big Bang.

Even before Big Bang's debut, Seung Ri was widely known in his hometown, Gwangju, because of his amazing dance skills. However, he failed many auditions beause of his short height. In YG Entertainment's Big Bang audition, he was almost eliminated, but luckily he was given a second chance, and his singing, dancing skills, and stage presence impressed the producers so much that he made it into the group.

Seung Ri was the first member of the group to be in a musical, starring in Sonagi, and the second member to debut as an actor. He appeared in the film "Why Did You Come To Our House" which was released in April 9th 2009. He will also act with T.O.P in the upcoming drama My 19-year-old. He recently released his first solo album "Strong Baby", so these days he has a pretty busy schedule. However he always practices his singing and dancing in order to give the perfect live performance for his fans.

Tae Yang became a trainee member of YG Entertainment when he was 13 years old. Since he was always training at YG Entertainment, he has never had a girlfriend, and so he is regarded as the pure, innocent band member by the fans. However, he is considered quite attractive due to his masculinity and dark skin color, and has more female fans in their 20s and 30s than any other member of the group. His first solo album Hot was a great success. Tae Yang likes urban hip-hop fashion and his hobby is collecting caps.

In 2008, Dae Sung starred in the Korean adaptation of Cats, becoming the second Big Bang member to appear in a musical. He showed off his many talents by appearing on a TV music show as a MC and on the very popular SBS entertainment show Family Outing. On these tv shows he came across as a really friendly guy and so Dae Sung has many fans. He's a great singer and performs well in many different genres. His trot single, "Look at Me, Gwisun", was a hit with many fans, regardless of their age and gender. It's thought that he resembles the Japanese animation character, Doraemon, so he receives many Doraemon dolls from his fans.

Big Bang's official fan club calls itself "V.I.P." (a reference to the band's second single: "Big Bang is V.I.P."). It is estimated to have around 300,000 members. Generally at concerts in Korea, most fans will wave balloons in a specific color to show their devotion to a band, however Big Bang fans don't wave balloons, instead they wave bandannas and crown shaped glow sticks, which are decorated with the letters BB. You can get these at YgeShop (http://www.ygeshop.com) or at concerts venues.

Commercials and Other Activities


In the first half of 2009, Big Bang emerged as one of consumers' top 10 favorite commercials models. The group has appeared in commercials for numerous products, such as cell phones, clothing, and drinks. They appeared in the Lollipop CM phone commercial and the song featured in the commercial, which was sung by Big Bang and YG's brand new female group 2NE1, was No1 in all online music charts, which shows the extent of Big Bang's popularity.

In addition to commercials, Big Bang have even appeared in the FPS video game, "Sudden Attack". The game, which had featured K-pop star, Rain, in the past, used the Big Bang members as characters in the game, as well as Big Bang themed items, and the group's hit songs as backgroud music.

The Big Bang members' biographical book Shouting Out To The World! was released in January 28th, 2009. The 280-page book was written by the members and tracks Big Bang's road to success. It starts from their debut in summer 2006 and gives inside details on their breakout success and then their triumph on the J-pop scene.