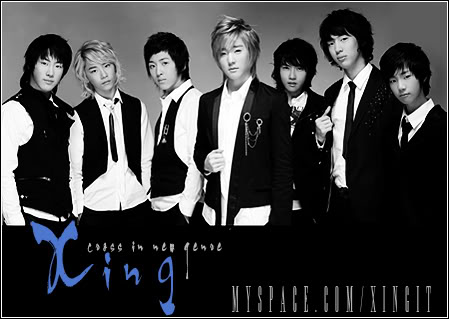 XING (acronym for Crossing in New Genre) is a 5-member male group from South Korea. The members include Kim Dong Geun, Kim Jin Wan, Hwang Doo Hwan, Jin Hyeon Jin and Kim Wan Chul. Xing made it in to the list of the Top 5 Most Anticipated Artists In 2007.

Xing's first single 'In Your Hands' was released on December 14, 2006, with 4 original members (Marumir, Kevin, Yume and Cheon Hyesung). Xing's popularity quickly rose and they were dubbed as the teenage SG Wannabe.

In late January, Xing held their first concert, which was a form of training for the group. Other than the concert, there were no other performances. In the beginning of 2007, the group was featured in a magazine, which included photoshoots and an interview to promote the group. They also participated in a few more photoshoots beside the magazine and released clips and music videos online. On July 14, 2007, Marumir announced his departure from XING, the reason being that he left for a better future for himself. He bid rest of the XING members good luck and told fans not to be heartbroken. Shortly afterward, two new members were added to the group, Poppin' Dragon and ZEN. Thus, Xing became a 5-member group for the release of their second single.

On August 5, 2007, Xing released their second single, 'My Girl', with the title song falling into the genre of pop. Although there were many fans that enjoyed the single, many thought that they strayed too far from the image and sound that the fans had initially fallen in love with. The single was promoted though a performance at the New Star event, which was a talent show organized by Xing Entertainment.

The group held its second concert on September 8, 2007. They performed songs from both their singles and each member delivered a solo performance. They are to perform officially on national television at the YTN Star Digital Night Concert.

At the end of 2007, Xing's member makeup dramatically changed. On September 6, 2007, Cheon Hye Sung left the group but with no statement or announcement from him or Xing Entertainment. On January 12, 2008, Yume decided to leave the group making a diary announcement to fans. On January 13, 2008, Poppin'Dragon also decided to leave the group. Kevin and Zen, along with four former members of the group "Singing in The Rain", Yoon, White, Husky, and Gun, and a new member Kipalang formed the new makeup of the 7-member group Xing.

On March 17, 2008, the 7-member Xing group released a digital single "T Express." The music style of the group changes once again, going from pop genre to a more dance genre with rap influence. After the release of this single, in April, Kevin, the only original member of Xing decided to depart from the group. The group now stands as a 6-member group. Xing Entertainment has stated that "Xing was a project group that will have members rotating in and out, in hopes in keeping the group fresh." 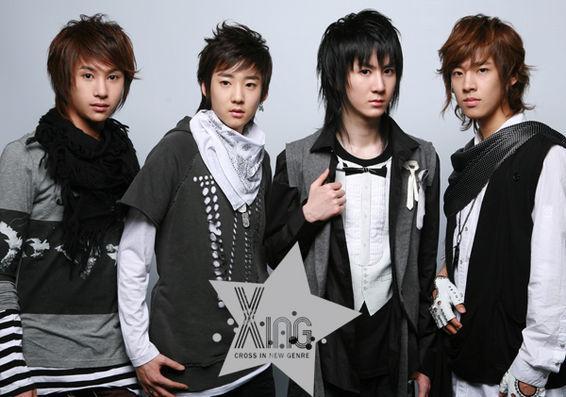 3rd The White of Winter