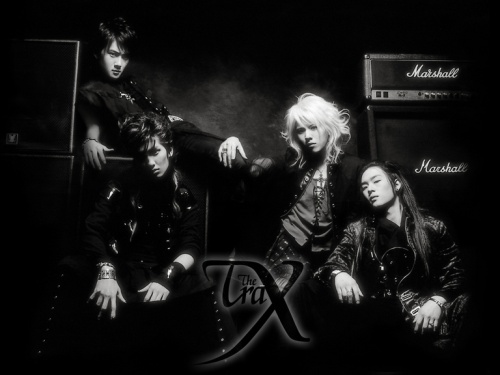 TRAX (also known as The TRAX) is a South Korean rock band formed in the summer of 2004 by SM Entertainment and formerly produced by X Japan's co-founder Yoshiki. The name "TRAX" stands for "recording tracks," but also stands for the first letter of each member's stage name (Typhoon of the Rose Attack on Xmas).

In 2000, SM Entertainment decided to produce a rock group, which took them four years to materialize. The TRAX members, Typhoon, Rose, and Attack first appeared in the "2002 Survival Audition HeeJun vs. KangTa Battle of the Century" along with TVXQ's Xiah and Super Junior's Sung Min and Eun Hyuk.

Typhoon (born April 8, 1983) is the leader and main vocals of the band. He is also known as Jay Kim ; his real name is Kim Young-Duk. Typhoon grew up in California, U.S..

X-mas (born March 26, 1985) plays the guitar for the band. His birth name is Kim Jung Mo and goes by the nickname "Gammo". The instrument he uses is a Zemaitis GZ501-Heart/BK Electric Guitar.

Rose (born May 29, 1986, real name No Min Woo was the original drummer for the band as well as a back-up vocalist and guitarist. He left the band in 2006. He has attended Inha University.

He recently resurfaced in 2009 as a member of a singing trio, 24/7, as well as taking part in a single with Girls' Generation's Sunny for Story of Wine's OST. Currently, he is starring in MBC drama 'Pasta' along with his 24/7 members.

Attack (born June 15, 1985) played the bass for the band. His birth name is Kang Jung Woo and goes by the nickname "Dul Bong". The instrument he uses is a ZON's Sonus5 (SVT Classic).

He has been confirmed as left the group to pursue other interests. It is unknown if he is still with SM, however there has been no activity regarding him since The TRAX's activities in 2007.