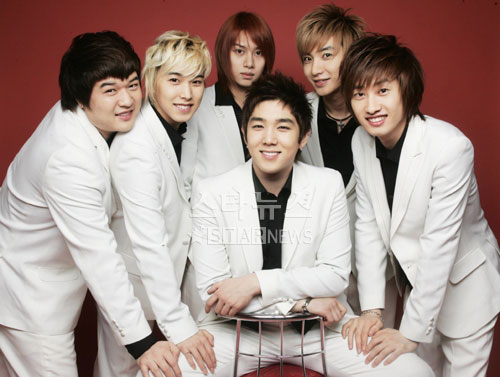 Super Junior, often referred to as SJ or SuJu, is a 13-member boy band from South Korea formed by SM Entertainment in 2005. The current active members consist of Leeteuk (leader), Heechul, Yesung, Shindong, Sungmin, Eunhyuk, Donghae, Siwon, Ryeowook, Kibum, and Kyuhyun. Members Han Geng and Kang-in are currently inactive with the groups activities. In 2009 it was announced that Han Geng was taking legal action to have his contract terminated with SM Entertainment. SM Entertainment issued a statement stating that they plan to solve issues with Han Geng personally. Since the announcement of the termination of Han Geng's contract, Super Junior has carried on as a eleven piece without Han Geng and Kangin (suspended by SM Entertinment due to legal matters outside of Super Junior ). The current status on Han Geng's position within the group is unknown, as well as Kangin's. Han Geng was chosen from three thousand applicants, via auditions held in China by SM Entertainment in 2001.

Super Junior has released and contributed in 19 different kinds of records with varying degrees of success. Over the years, they have been divided into smaller sub groups, simultaneously targeting different music industries and audiences. Largely due to Super Junior's success as entertainers, other Korean entertainment managements began to train their music groups in other areas of entertainment, such as acting and hosting. In addition to their commercial success, Super Junior has earned seven music awards from the M.net Asian Music Awards, eleven from the Golden Disk Awards, and is the second singing group to win Favorite Artist Korea at the MTV Asia Awards after JTL in 2008.

Prior to the group's debut, the members had individually appeared in television dramas, with Leeteuk being the first member of the group to act; he was an extra as a moviegoer for the drama All About Eve in 2000. Kang-in appeared as an extra for The Secret Lovers in 2002, and Siwon made a brief cameo appearance in Precious Family in 2004. Kibum had his acting debut in 2004 as young Han Jung-woo in April Kiss and in 2005, he was given the main role Joo Yeo-myung for the year-long drama Sharp 2, starring alongside Go Ara and Heechul. A few months before Super Junior's debut, Siwon starred as the young Kang Bong-man in Eighteen, Twenty-Nine; Heechul was given a role as a junior chef in Loveholic, and Sungmin starred as young Kang Dong-shin in morning drama Sisters of the Sea. After the group's debut in November 2005, both Heechul and Kibum acted in the sixth season of the sitcom Nonstop from late 2005 to early 2006. Kibum individually starred in Marrying a Millionaire as young Kim Young-hoon in 2005 and in March 2006, Heechul starred as Gong Min in Bad Family. That same year, Siwon was part of the supporting cast for Spring Waltz and Kibum starred as Ha Yeongchan in Snow Flower. In 2007, Heechul starred as Kim Young-soo in the popular drama Golden Bride, which ended its broadcast in February 2008 after the extension of 14 episodes. Siwon starred as the ambitious Lee Mong-ryong in the two-episode parody historical drama Legend of Hyang Dan and Kang-in made a cameo appearance in Billie Jean, Look At Me. The song "It's Just That", sung by Super Junior-K.R.Y, was used as the drama's theme song. In 2008, Kibum starred in the sitcom Chunja's Happy Events as Park Jung-woo, and Kang-in had his first major television role in Romance Zero as Na Ho-tae in 2009. In August 2009, Heechul played the piano for Lee Chul for Loving You a Thousand Time.

Siwon was among the first of Super Junior to have participated in silver-screen productions, appearing in the Hong Kong historical action drama film, A Battle of Wits as the supporting role of Prince Liang in 2006. In 2007, Heechul, Kang-in, and Shindong lent their voices to the three chipmunks in the Korean release of Alvin and the Chipmunks. In 2008, Kang-in had a major role in the Korean-language film, Hello Schoolgirl.

Despite numerous appearances as television actors, Super Junior are still best known for their reality shows, having participated in popular comedic reality shows such as Super Junior Show (2005-2006), Super Junior Full House (2006), Super Adonis Camp (2006), and Explorers of the Human Body (2007-2008). In contrast, the group released a horror documentary, Mystery 6 in early 2006 that tells a story of a ghost. The members also starred in various music videos of artists under SM Entertainment.

The Super Junior members were one of the first Korean idols to begin television presenting and radio hosting. Heechul was the first in the group to be a selected MC for the music programs Popular Songs and Show Music Tank. He was also the first in the group to host radio shows, and co-hosted Youngstreet Radio Show with ex-M.I.L.K. member Park Heebon in early 2005. Leeteuk, Kang-in, and Shindong made their MC debut on Mnet's music program M! Countdown five days after Super Junior's debut performance. In August 2006, both Leeteuk and Eunhyuk founded their own radio show, Super Junior Kiss the Radio, which has become one of the more tuned-in radio channels in the country.

The group also founded their own reality television program, and on November 11, 2007, the premiere of Explorers of the Human Body aired on SBS. The humorous show introduced the thirteen members as regular guests for the program, answering curious questions and doing demonstrations involving the human body. Kyuhyun, who was recovering from a car accident during the first half of the show's filming, joined the show in the later episodes. The show has been the highest rating program of the reality line-up every Sunday, but due to Super Junior's tight schedule, the program ended quickly with thirteen episodes on February 3, 2008. The popularity of the program had inspired producers to create a second season, although no announcements of producing the next season has been announced.

Attack on the Pin-Up Boys

Twelve members, excluding Kyuhyun, appeared in the group's debut film Attack on the Pin-Up Boys. The first film released by SM Pictures, it premiered on July 26, 2007 in Korea. "Wonder Boy", performed by Super Junior, is used as the theme song of the film. Although the film was promoted as a typical high school comedy, the movie gained positive reviews from critics, praising that the movie had a well-oriented plot unlike most idol films. However, ticket sales remained low in the premiere month despite its unexpected success in the sales the first week. The film was a box-office bomb, failing to attract more than 102,600 admissions and was proven to be a big loss for SM Pictures. However, both versions of the film's DVD became a best-selling record and were sold-out in both Korea and oversea markets, which was more than enough to make up for the production loss of 8.5 billion won.