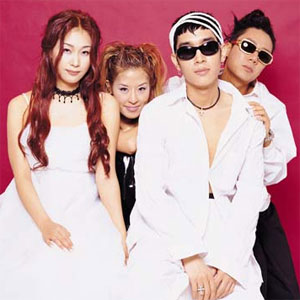 Roo'ra is Korean hip hop and dance group from 1994-2001. Its name is abbreviation of Roots of Reggae.

Many of the groups albums were the top selling of their time in Korea, with their debut album selling over 280000 copies. As well they also hold the title for first setting the record of one million album sold in the dance and hip-hop genre in Korea. The group also caused significant controversy in 1996 through the discovery of their unattributed sampling of a Japanese track ("Omatsuri Ninja", by Ninja) directly in their own song "Cheon sang yu ae". This incident raised a heated debate '...about the nature of "Korean-ness" in popular music' and pushed this pointy but long dormant issue to the forefront in the mid-1990s. The group nearly split in 1996 due to the controversy and then finally in 2001 after the release of their final album. In 2008, the group was reunited with Lee Sang Min, Go Young Wook, Kim Ji Hyun, and Chae Ri Na to work on an upcoming album. In the middle of the project, Shin Jung Hwan and Go Young Wook formed a temporary duo group, "Roo'ra Man" and released a single, "The Reason Why I Hate Winter." in December 2008. The single was produced by Lee Sang Min. Roo'ra's new album is expected to be released in July 2009 with "Going Going" as the first single.

The group was also an important stepping stone for many korean pop stars and song writers. The original members of the group were Lee Sang-min, Go Young-ok, Kim Ji-hyun, and Shin Jung-whan. In 1995 Jung-whan left to fulfill his military service requirement, and was replaced by Chae Ri-na. Jung-whan appeared with the group on a couple of occasions in 1995, and again in 1997, though was not billed as a member, nor did he appear on their albums after 1994. In 1996 Kim Ji-hyun left to pursue a solo career, and was replaced by Michael Romeo. The group disbanded in 1997; then re-formed in 1999, with Ji-hyun returning to join Sang-min, Young-ok, and Ri-na in the configuration that remained through the group's final dissolution in 2001.