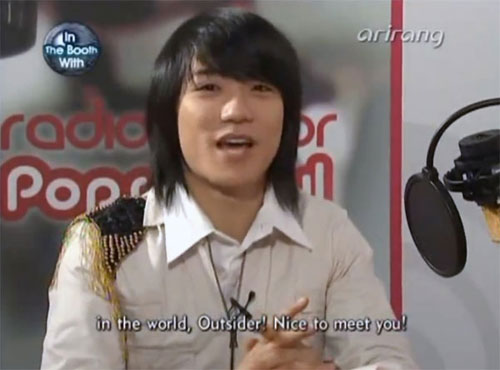 Outsider (born Shin Ok-cheol, March 21, 1983) is a South Korean rapper. He is known for his speed-rapping and is reputed to be able to rap at 18 syllables per second. Outsider considers fellow Korean rapper MC Sniper as his mentor, and he is currently signed to MC Sniper's label, Sniper Sound.

Outsider first debuted as an underground rapper and received some success. His first break came to him when he was shown on a tv show hosted by the famous Yoo Jae Seok where he showed his incredibly fast rapping skills, which impressed everyone. He then was scouted by the Korean hip-hop legend, MC Sniper, who signed Outsider to his label "Sniper Sound".

He has released two studio albums, Soliloquist and Maestro. Outsider promoted his first album , Soliloquist, with a single titled "Like a Man" where he demonstrated his amazing ability and the album did awesomely well.

His second album, Maestro, was a huge,enormous success, topping charts and the title track "Loner" held the #1 spot on M.Net and Melon music charts for more than 50 weeks, making Outsider one of the first rappers to ever reach #1 on a Korean music chart as well as the W- music chart. Outsider has also performed on MBC, SBS, KBS, MNET, and had appeared on SBS's Star King as a special guest for a contestant. After the promotion for "Loner" ended, he started to promote another track from the same album titled "My Youth Confession", with the help of Joy and Vassco. This track gained relative success.

Outsider has also worked with underground and overground rappers such as MC Sniper, L.E.O, Illnit, DJ R2, Bae Chi Gi, Dok2, and more. he also did a special performance with the rising ballad singer, K.Will, where K.Will showed his rapping skill by rapping alongside Outsider without a problem.

He has also collaborated with Song Joon Ki in Music Bank. After a short hitatus, he returned on march of 2010 to release his 2nd EP. The album was titled "Vol. 2.5 The Outsider" and the music video was released on the same day. The album's title track "Acquaintance" is a powerful hip-hop song mixed with a classical edge similar to Loner.

Outsider also has done a special stage where he rapped his own remake version of Big Bang's "Lies". He is titled the fastest rapper in Korea, due to the fact that he is able to rap 18 syllables per second. He was unable to become the world's fastest rapper due to the fact he is not able to do it in English and has been unable to beat the 20 word per syllable limit set by African-American rapper, Rebel.