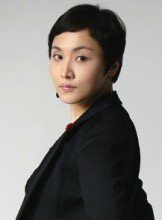 Lee So-Ra (born 29 December 1969) is a Korean singer. She released her first album in 1995. Her sixth album, Nunsseopdal won her the Korean Music Award for Best Female Vocalist in 2005.(in Korean)

From 1995 on, she also hosted her own music talk show, Lee Sora's Propose Show, which showcased live performances of artists (similar to the current music program Love Letter). The last shows were aired in 2002.