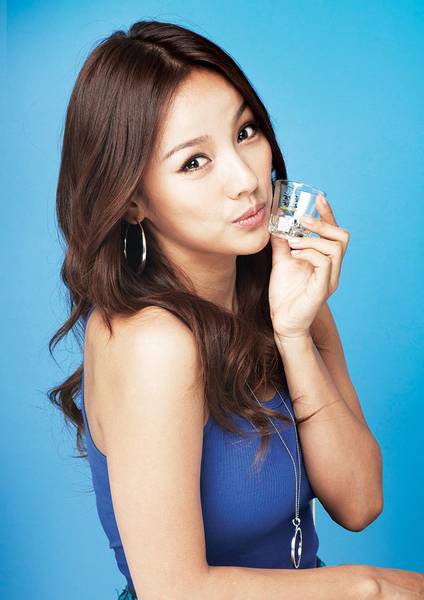 Lee Hyo-ri (romanized as Lee Hyolee and officially E Hyo-lee) is a South Korean singer and actress. She started off as part of the successful K-pop girl group Fin.K.L, but has since become a solo artist. Her first album was very successful, winning many "Daesangs" (a Korean award equivalent to "Artist of the Year") for that album. She has since become the highest-paid female singer in South Korea.

She started her career as part of the Korean pop girl group Fin.K.L. As the oldest member, she would become the leader of the group. Lee was discovered while taking sticker pictures with her friends and was actually the last to join Fin.K.L., just before their debut in January 1998. Fin.K.L. debuted officially on May 22, 1998 with their first single "Blue Rain." It was received quite well. The second release from their first album, To My Boyfriend, became the first of their multiple number one hits. Fin K.L. became one of the most popular and successful Korean groups of all-time, rivaling fellow popular girl group S.E.S..

A year after Fin K.L.'s fourth album Forever, her solo album was released at the end of 2003, entitled Stylish...E. The singer nearly swept the 2003 Daesangs, the most prestigious South Korean music award, winning more than seven of them, including three of the four most prestigious Daesangs. STYLISH...E hyOlee sold over 144,182 copies in South Korea alone, according to the Music Industry Association of Korea in 2003. Her popularity in her various activities eventually was dubbed as the "Hyori Syndrome" in South Korea, and the Korean Media nicknamed 2003 "The Year of Hyori" as she was rarely out of the news all year.

Lee Hyori has also appeared as the lead female actress in the SBS drama Three Leaf Clover co-starring opposite Ryu Jin, Kim Jung Hwa, Kim Kang Woo and Lee Hoon. However, the ratings were continually low, and it ended after 16 episodes. On August 8, 2005 she co-hosted the annual Korean Music Festival for the second year running.

In February 2006, Lee released her follow up album, Dark Angel. The first single, "Get Ya", featured heavy choreography and sexually suggestive attire, which has become Lee's trademark. However, there was controversy over the single as the songwriters of Britney Spears' single "Do Somethin'" accused the "Get Ya" songwriters of plagiarism. After media attention increased, Lee and her record company quickly stopped all promotion for the single, taking a short break to prepare for "Shall We Dance", her followup single. Due to the negative attention, both the single and album were not successful, and promotions were stopped. "Straight Up" was released as a final single, but it was not promoted by Lee. 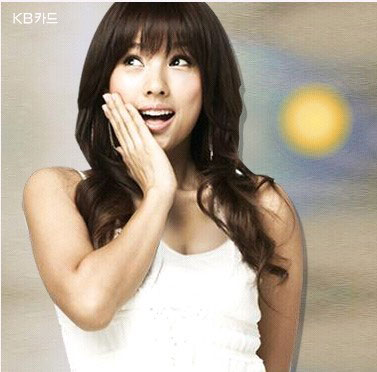 In November 2006, it was revealed that Hyori had signed a three-year contract with M-Net Entertainment for 2.2 billion korean won, becoming the highest paid female singer in South Korea.

Meanwhile, Hyori prepared to appear in a new "mini-drama" during February 2007, despite the failure of her previous drama. She starred alongside Lee Dong Gun in If In Love... Like Them which, although originally announced as being only one episode long, ran for four episodes on MNet. An edited two-episode version of the drama also ran on SBS. During filming for the drama, part of a roof Lee was standing on collapsed. Only her foot fell through the roof and she was able to be saved, and as it was reported the fall would have been fatal if co-star Lee Dong Gun had not rescued her. In February 2007, Lee announced her new digital single which would essentially be the soundtrack to If In Love... Like Them. She had her comeback on SBS Inkigayo on February 25, 2007, performing all three main tracks from the single. The lead song was "Toc Toc Toc", which was a sexy R&B number like her previous efforts. However, the single also gave Lee an opportunity to sing ballads and to slowly move her image away from the "sexy superstar" that she is known to be. The single, although initially given a digital-only release, was given a limited retail release of only 30,000 copies, and was titled If In Love Like Them. Released on March 6, 2007, it included three of the tracks found in the digital single, along with a reworked version of "Toc Toc Toc". It was the best-selling album for that month, selling 27,845 copies.

Although her single succeeded, her drama was heavily penalized for violating advertising guidelines, as If In Love had several scenes advertising the products of its sponsors, in addition to using Lee's songs in the soundtrack. The Korean Broadcasting Committee has ruled that the drama can never be aired in South Korea again, and that the network must apologize to its viewers.

According to The Chosun Ilbo, Lee has also been promoting her work in Japan. Japanese network Fuji TV decided to air If In Love... Like Them and has even invited the singer/actress to visit Japan to promote the drama, where she will be treated to the same VIP treatment offered to other international stars. However, the drama was broadcast on satellite station CS Fuji, a smaller network that Fuji TV owned. The Japanese considered the leading part of this drama to be Lee Dong-gun.

2008: Comeback into the spotlight

During breaks in her solo music career, Lee also hosted various television programs, including Time Machine and Happy Together, which she co-hosted with Yoo Jae-suk in 2006. It was reported on March 26, 2008 that Lee would join KBS's Sang Sang Plus as a co-host alongside Country Kko Kko members Shin Jung-hwan and Tak Jae-hoon, replacing various outgoing hosts; she debuted on April 8, 2008. She was one of the original co-hosts of Change, a show on SBS's Good Sunday line-up, before leaving in early July[citation needed]. She also starred in Off the Record, a behind-the-scenes look at her life. Currently, she is a permanent cast member of the variety show Family Outing.

Her third album, It's Hyorish, was released on July 16, 2008. "U-Go-Girl", her first single, hit #1 on various online and offline charts, including the various television music shows.

In November 2009, the contract with M-net will be expired. Lee planned to sign a contract with Gil Entertainment and work with Gil Jong Hwa who was Fin.K.L's co-manger and worked since as Fin.K.L debuted. However, her 2010 album is released under the label of Mnet Media.

After almost 2 years since her previous release a new album, called "H-Logic", has been released on the 13th of April, 2010. The album contains 14 tracks, and for this album Hyori collaborated with Big Bang's Daesung (with whom she worked together on the Korean TV-show Family Outing), 4Minute's Ji Yoon, After School's Bekah, Gary from Leessang, and Sang Chu from Mighty Mouth. Hyori also worked with E-Tribe again, a duo that is responsible for her song "U-Go-Girl" from her previous album. On the 31st of March Hyori released the promo video for a song from the album, titled (Geune; Swing). It features some rap parts by Gary (from Leessang). Not long after that Hyori released the lead single from the album, titled "Chitty Chitty Bang Bang", and its music video. This self-penned song, which features some rap parts by Ceejay (from Freshboyz), has been released on the 13th of April, thus releasing it at the same day as the release of her new album.

Accusations of plagiarisms continued with H-Logic. The songs in question were sold to Lee by composer Bahnus, who is credited for seven songs on her fourteen-track album. The list of speculated plagiarized songs include: "I'm Back" (plagiarized from Canadian indie-singer Lil Precious' track "So Insane"), "Memory" (from British Trip-Hop group Second Person's track "The Alphabet Song"), "Feel the Same" (from Canadian indie-singer Melanie Durrant's "Feel the Same"), "Swing" (of which the melody resembles Greek composer Mikis Theodorakis' "To treno fegi stis ohto"), "Bring it Back" (from aspiring Canadian girl-group Cookie Couture's "Boy Bring it Back") and "How Did We Get" (from Jason Derulo's "How Did We", which also sampled Annie Lennox's "No More I Love You's", which on its turn is a cover from the song with the same name by The Lover Speaks).

Although Lee has done many endorsements for various companies (including Dole), her most prominent commercials were made for Samsung Anycall. In late 2003, Lee signed an advertising contract with Samsung, for which she would make three musical commercials and songs for their Anycall cell phones. The first commercial and song, "Anymotion", were released in early 2005, featuring Eric Mun from K-pop group Shinhwa. In early 2006, the followup commercial "Anyclub" was released in two parts; this also featured Eric Mun in addition to Korean actor Kwon Sang Woo. The song "Anyclub," however, featured neither Eric Mun nor Kwon Sang Woo. Instead, Park Teddy of 1TYM was featured. The songs from the commercials served as singles for Lee in between her albums. The final commercial was released in December 2006, titled "Anystar". The commercial differed from the first two in that it featured mostly dialogue. The commercial starred Korean actor and singer Lee Jun Ki and also YG Family trainee Park Bom(2NE1). Also in the month of March Hyori starred as one of the leading actors in Davichi's music video. Hyori also became a model for Black Bean Therapy, a health drink, and she made several CF (commercials). Hyori also modeled for Ceci magazine; a well known Korean fashion magazine, showing new, fresh personalities. Hyori finished her contract with Biotherm early February 2007 and is no longer a representative for the company. Her contract with Samsung has also ended in December 2007. She has recently signed on with KB card and has starred in commercials along with fellow K-pop sensation Rain. She was recently chosen as the first ever Asian-wide model for Calvin Klein Jeans, modeling for the "Pure Calvin" Collection. She was also briefly featured in a 2010 CF for clothing company Adidas. Also in 2007, she starred in a commercial for Korean cosmetics company Isa Knox with Jessica Alba. She has done so many CFs in Korea, she is known as being the 'CF queen.'