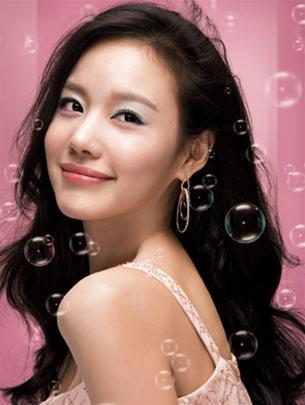 Kim A-jung is a well-known Korean actress/model/singer who rose to stardom from her roles in numerous films and commercials. Most known was her role as a large girl (Han-na) who undergoes cosmetic surgery makeover to become a pop sensation in the highly successful 2006 South Korean comedy movie 200 Pounds Beauty. For her leading role in 200 Pounds Beauty, she was awarded Best Actress in the 2007 Grand Bell Awards. Prior to that, she previously appeared in a few other TV series including the popular The Bizarre Bunch in 2005 by KBS. As well as major commercials and continues to model. She did her own singing in the movie, including "Beautiful Girl' in the opening credits music and the song 'Maria'. Kim also is one of the most featured models in South Korea advertisements.