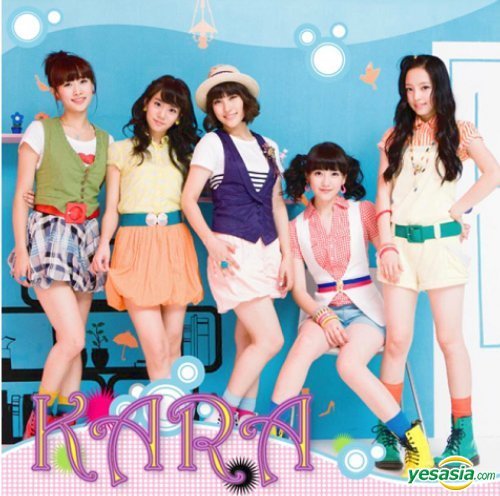 Kara is a girl group from South Korea. They are signed to Daesung Entertainment (DSP). Kara comes from the Greek Word "chara" ("joy"), which the group interpreted to mean "sweet melody".

After losing a member in 2008, Kara regrouped to become a five-member band and eventually achieved their first number one song with "Honey"


Park Gyuri is the leader of Kara. Prior to her singing career, she was a child actress. Her first appearance was on Today is a Nice Day in 1995 where she played the girlfriend of Kang Ho Dong's brother. She later appeared as the teenage version of Kim Jung Eun's character in Ladies of the Palace in 2001. Originally having auditioned as a rapper, she rapped for the first time in the song "Mabeob" ("Magic") with Nicole on Kara's 2nd album Revolution. She featured in a duet titled "Day After" with Hong Kyung Min on his 10th album Special Edition, released on February 4, 2010.

Upon Nicole's segment ending on Star Golden Bell, she was appointed as a permanent guest; she was planned to have her own segment on the show, but the producers did not follow through.

On April 21, 2010, it was announced that Park would take over the position of DJ alongside Shindong on "ShimShimTapa" after Kim Shinyoung left. Their first broadcast is to air on May 6, 2010.


Han Seungyeon debuted as a child actress in a cameo role in Star in My Heart. She was the VJ for MSL Break from 2007 to 2008. She replaced Tiffany of Girls' Generation as co-host of Sonyeo Sonyeon Gayo Baekso (Boys and Girls Music Guide) with Kim Hyesung and later with actor Kim Soohyeon. Their segment ended on May 8, 2009.

From October to December 2008, she was part of the cast of MBC reality show Family Needed, where a group of celebrities would live life as a family, consisting of a father, mother, son and daughter. She also became part of MBC's entertainment news show Section TV as a "pop columnist", debuting on November 21, 2008. She also made a guest appearance on rapper Nassun's single "Nolleowa" ("Come to Play"), which was released in March 2009, and appeared on the soundtrack for the movie Welcome to my House, releasing her first solo song "Gijeok" ("Miracle").


Goo Hara was born and raised in Gwangju. She was an online shopping mall model before debuting, having been scouted after her photos were uploaded onto DSP's homepage. In late 2008, she appeared along with the other Kara members (excluding Seungyeon) in an episode of MBC sitcom That Person is Coming, having the most prominent role as a female gang leader.

In October 2009, she became a cast member in KBS 2TV reality show "Invincible Youth". She also joined MBC's Hunters, along with SS501's Kim Hyun Joong, Jung Yong Hwa, Lee Hwi Jae, Shin Jung Hwan and two professional hunters to catch overpopulated wild boars that have become a dangerous threat to people and crops. The first episode aired on December 6, 2009. However, due to complaints about animal rights after the first episode, the show's format was quickly changed to Eco House; Goo Hara does not appear in the new show.


Nicole was born and raised in Glendale, California. She wrote the rap lyrics for KARA's first album, the song "Let It Go" from their 2nd album and for their third mini-album "Lupin". She featured in Sunha's song ("String") in 2008. She joined Star Golden Bell, hosting a segment "Level With Me (Season 2)" in which the guests have to guess a term or title from her clues; the challenge comes due to her comparative lack of skill and experience with the Korean language. The segment ran from December 20, 2008 to October 17, 2009.

In April 2009, she also sang a duet called "Happy and" with former Noel member Kang Kyun-seong.

In August 2009, she and then-2PM member Jaebeom became part of historical culture variety show Nodaji, replacing Choi Min Yong and Kim Tae Hyun. The show was canceled due to low ratings in October 2009.

Nicole starred in the third season of M.Net reality show "KAIST" which portrayed a celebrity's life as a college student. However, the show was renamed "Nicole The Entertainer's Introduction to Veterinary Science" in Konkuk University since Nicole would not be attending KAIST. The first episode aired on November 12, 2009.


Kang Jiyoung was born and raised in Paju, Gyeonggi-do. In April 2009, she collaborated with JUMPER for the song "Nunibushyeo" ("Sparkling Eyes").


Kim Sunghee sang a solo "Then It's Done" for the soundtrack of SBS drama Three Leaf Clover. In August 2009, she featured in g.NE's song ("Dream"). 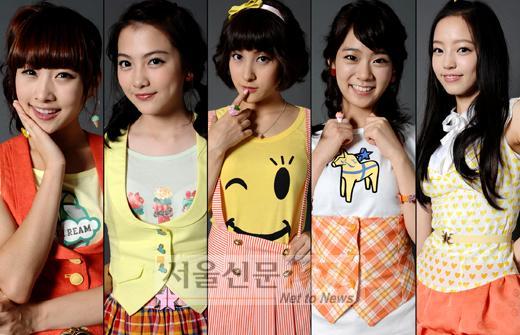 They debuted as a four-member girl group on March 29, 2007 with "Break It" on M! Countdown. Their first album was called The First Blooming, and they debuted with the mature, independent, "strong-female" image and they focused on singing and music, instead of appearing on variety shows. They made two music videos from this album: "Break It" and "If U Wanna". Promotions ended in the summer of 2007.

Because of their similarity to Fin.K.L and the fact that both were signed to the same company, the two were often compared; in response, Kara stated that they wanted to work hard enough to deserve the comparison.

The group intended their comeback in March 2008 with their second album. However, Sung-hee left the group suddenly due to parental pressure, as her participation in the group was contingent on the maintenance of her grades. She failed to pass her college entrance exam, and was forced to leave the group. In response, DSP stated that the second album would be shelved and replaced by a mini-album to come in May; in addition, two members would join the group, chosen through public auditions, to be chronicled by music television station M.Net.

The two new members were eventually revealed to be Goo Hara and Kang Jiyoung. Kara's comeback as a 5-member group was on July 24, 2008 with "Rock U" on M! Countdown. They made their comeback with the "cute" and "playful" image. In the same month, their first EP was released. After promotions for the song ended, Kara digitally released "Good Day: Season 2", a remake of a song on their EP, on October 13, 2008. A music video of this song was released a few days after.


On November 29, 2008, DSP Entertainment released a teaser video for their upcoming single, "Pretty Girl", which received over 40,000 hits within 12 hours. The full video was released on December 2, 2008 online and was positively received by the public, while the EP was released on December 4. The mini-album is supposed to have a "party/fun" concept. The group began its comeback on all major music shows on December 4, 2008, starting with M.Net Countdown. During their first national performance on KBS's Music Bank, member Goo Hara accidentally slipped due to falling confetti and accidentally said "Ah" in the middle of the performance and cried for an hour backstage. Netizens made it a "hot issue", but Goo Hara received comfort instead of criticism from the public.

Leader Park Gyuri attributed their popularity increase to their "pretty but natural" appeal, while media reports gave credit to the band finding their own identity and to older male fans, most notably singer Shin Hae-cheol.

Due to the hectic promotional schedule, a few of the group's members were taken to the hospital on December 19 after a KBS Music Bank rehearsal, but a DSP representative said that it was not serious. "Honey"


At the end of January 2009, DSP Entertainment announced that it would commence voting on January 28 at Kara's official website for the follow-up single to "Pretty Girl", which would end on February 2. By the deadline of February 2, "Honey" was the clear winner, with 60% of the votes. The group filmed a music video for the song, which was released on February 16. The song was also first performed on KBS's Music Bank program on February 13, 2009; a repackaged mini-album followed on February 19.

The group did its last round of promotional activities for this album on April 1012, 2009.

Revolution was revealed in June that the group would return in late July 2009, with their concept to be "upgraded". The first teaser pictures of the group were then released in mid-July, showing radical changes in the group's style.

Their single "Wanna" was released on July 28, 2009. The song quickly charted on various digital music charts. The music video was released on July 29, with the full album being available on July 30. Comeback activities commenced on July 31, beginning with KBS's Music Bank; the group performed both "Wanna" and "Mister". "Mister" proved to be popular with netizens due to a "butt dance" that is featured prominently in the choreography. Due to the popularity of the song, Kara's overall popularity increased, with numerous advertisement requests coming in for the group; they had more advertisements in October 2009 than the previous two years.


DSP Media released two teaser photos of Kara's comeback concept on February 9, 2010. The photos garnered a lot of interest because compared to their past album concepts, the new photos displayed a more mature, dark and mysterious Kara. The next day, the album jacket was unveiled with the the concept named "Stealer" and the title track "Lupin", which became #1 on several online music charts after its release. The teaser video was released on February 12 on Naver; the mini-album was released on February 17. Kara have their comeback starting on M.Net's M! Countdown on February 25, 2010.

The music video was released on February 22, garnering more than 90,000 views in the first 2 hours.

On March 4, 2010, Kara won their first #1 award for "Lupin" on M! Countdown. On the following week, Kara won yet another #1 award on M! Countdown, making it their second consecutive win on the music program. "Lupin" also gave Kara their first #1 win on Music Bank on March 12, 2010, making it the group's first win for the music show since their debut, holding onto the position for three consecutive weeks. The song also topped the Inkigayo and won the Mutizen award. In total, Kara has won 6 awards for their single "Lupin", making it their biggest single to date.

Kara had two seasons of a behind-the-scenes reality show titled KARA Self Camera. The first season debuted on August 8, 2007, and chronicled the lives of the girls over 15 episodes. After the first season ended on December 12, 2007, the show restarted on August 18, 2008, which showcased how the group was adapting to its two new members. The second season lasted for 8 episodes.

On January 16, 2009, it was announced that leader Park Gyuri would be a VJ on cable network KMTV for their J-Pop show J-Pop Wave. However, it was also announced that the other members of Kara would also join Park on the show, as they were all familiar with Japanese pop music. The first episode aired on January 17, 2009.

At the end of March, Kara was chosen for the fourth season of MBC Every1's Idol Show, "Idol Corps Have Risen! Girls"), which marked the group's first hosting duties for a show. Kara then had a reality show MTV Meta Friends, which chronicled a group of fans getting a chance to become Kara's friends. For the show, the group had their first concert since their debut in 2007.

Kara starred in the second season of M.Net's "Crown Bakery" after the Wonder Girls. The show is renamed "Kara Bakery" and first aired November 25, 2009.

They made a cameo appearance in the first episode of drama series HERO, starring Lee Junki.

"Ddokateun Mam", "The Same Heart") was a song used in "i-Musician", an upcoming mobile game that Kara promoted; the song was released digitally in June 2009.

In January 2010, they sang the main original soundtrack of drama series (Stars Falling From the Sky).

On April 2010, it was revealed that Kara will sing a cheer song for the 2010 World Cup entitled "We're With You". Behind-the-scenes and individual member teaser videos were revealed along with photos of Kara wearing cheerleader outfits. The song was released on May 3, 2010.