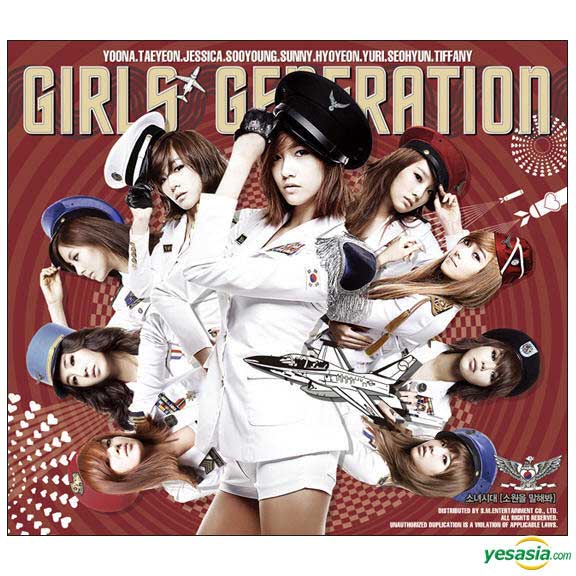 Girls' Generation is a popular nine-member South Korean girl group formed by SM Entertainment in 2007. The members are, in order of announcement to be in the group, Yoona, Tiffany, Yuri, Hyoyeon, Sooyoung, Seohyun, Taeyeon (leader), Jessica, and Sunny. They are commonly referred to as SNSD, the acronym of the group's Korean name So Nyeo Shi Dae or So Nyuh Shi Dae.

The group has released two albums and various singles. Their most successful song is "Gee", which is the longest-running #1 song on KBS's Music Bank, at 9 weeks total.

The members of the group have had various activities as solo entertainers - acting in various dramas and musicals, hosting various reality-variety shows, and releasing solo singles.

Pre-debut
The members were professionally trained primarily in singing and dancing while a select few were also trained in acting and modeling. Many of the members had already made appearances in magazine ads, television commercials, and small television appearances. For nearly two years, Korean websites speculated about which female SM Entertainment trainees would be placed into the group. They were speculated to be called Super Girls after their counterpart Super Junior. Debut and first album


In July 2007, Girls' Generation had their unofficial first stage performance on School of Rock. The song the girls performed was called "Into the New World" (Dasi Mannan Segye), which became their first single. A show documenting the girls' debut titled M.Net's Girls Go To School was filmed during this time. The song had a physical release, which included two other songs, "Beginning" and "Perfect for You", which was later renamed to "Honey" for their self-titled debut album Girls' Generation. An instrumental of "Into the New World" was also included. The group began promoting the single soon after its release. Girls' Generation performed their single on SBS's Inkigayo, MBC's Show! Music Core, and on KBS's Music Bank. They officially debuted on August 5, 2007.

After a short break, the group's first full album was released in late autumn 2007, with the lead single "Girls' Generation", a cover of Lee Seung-chul's hit. Promotion for the single started in early November. Marked by dance routines and vocals, "Girls' Generation" was a hit for the group, and the album sold 121,143 copies to date, placing 8th in the year-end charts. In early 2008, Girls' Generation began promoting their second single, "Kissing You". The music video featured Donghae from Super Junior. This song achieved the #1 spot on three major TV music rankingsSBS Inkigayo, M.net M.Countdown! and KBS Music Bank.

In March 2008, the album was re-released and re-titled Baby Baby. A third single, "Baby Baby", was used to promote the album. A digital EP featuring Jessica, Tiffany and Seohyun was released on April 2008, titled Roommate. The single from the mini-album is "Oppa Nappa", literally "Bad Brother", although contextually it refers to an older male friend).


For most of 2008, the group was active in other areas of the entertainment industry. It was announced in autumn 2008 that Girls' Generation would be starring in a reality show on M.net, titled Factory Girl. The show chronicles the girls working as interns at fashion magazine Elle. The program began airing in early October. The group also participated in SM Town Live '08.

It was then announced that the group's first EP, The First Mini Album - Gee, would be released in January 2009. A teaser video was released in January 2009 and the first single "Gee" released soon after. Interest in the song rose after the digital release, topping Cyworld's hourly music chart on the release day. The song also went #1 on all major digital music charts within two days.

The group began its album promotion on January 2009 on MBC Show! Music Core. They sang their new single, "Gee", and "Him Nae (Way To Go)", another track from Gee. Meanwhile, questions were raised when the group did not appear on KBS's Music Bank with "Gee", even after winning #1 on the music chart show.

"Gee" is the record holder for the longest-running No.1 on music portal M.net (for 8 weeks), surpassing the previous record of 6 weeks set by the Wonder Girls' "Nobody". They also set a record on KBS's Music Bank by being #1 for 9 consecutive weeks, breaking the record previously set by Jewelry's "One More Time", which had 7 wins. "Gee" was also awarded by Music Bank for being the best-selling song of the year. Promotions for the song ended at the end of March.

After a short break, SM Entertainment announced that the girls would be back with a new single and showing a "Marine Girl" concept; the song, titled "Sowoneul Malhaebwa (Genie)" (literally "Tell Me Your Wish"); the mini album was released digitally on June 22, 2009. The mini-album, Genie, includes a duet between Jessica and SHINee member Onew called "One Year Later". The group started its promotional activies on the June 26, 2009 recording of KBS's Music Bank. The group then had their return performances on MBC's Music Core and SBS's Inkigayo on June 27 and 28, 2009. The mini-album was released on June 29, 2009.

In addition to their musical activities, the girls have had various television series, with varied success. On May 3, 2009, Girls' Generation starred in their new reality show Sonyuh Shidae Horror Movie factory, with the premiere episode receiving a viewership rating of 3.3%. The show was then cancelled after 6 episodes due to low ratings. The show was replaced with another Girls' Generation reality program Himnaera-Him! or Cheer Up! in which the girls try to cheer up hardworking people in the midst of an economic slump. The show was canceled after two episodes due to the girls becoming too busy with the release and promotion of their new mini-album, Sowoneul Malhaebwa (Genie). Since June 23, 2009, the group has been on a reality series titled Girls' Generation's Hello Baby, on cable network KBS Joy, where they take care of a child and experience what motherhood is like. In that show, they take care of a boy named Cho Kyungsan, and each week they (or fathers, male guests who come out time to time) select "The Best Mom" and "the Worst Mom" among the members according to their work for the day. The show ended on November 17, 2009.

The group also announced its first solo tour, with two Korean dates in December and other Asian locations to follow. The Korean dates sold out in 3 minutes. The concert is titled "Into the New World" after the name of their debut single. Due to the success of the first concerts, the group confirmed that they will be holding encore concerts on February 27 and 28.

2010: Second album and other activities

Later in January, SM Entertainment confirmed the release of Oh!, the group's second full-length album, released on January 28. The lead single "Oh!", was digitally released on January 25 with the music video being released two days later. The song proved to be popular topping various charts upon release. On January 30, the group started promotions with the recording of MBC's Show! Music Core. The performance experienced a blackout near the end, to which MBC made the whole performance available online.

Starting from March 11, 2010, photos of the members were released online showcasing a dark concept, so called "Black Girls' Generation". The Black SoShi nickname is a play on the Korean group name (So Nyeo Shi Dae). A teaser video was released on March 16, with the new single released as a digital single on March 17. The music video for "Run Devil Run" was released on March 17, and the group is expected to perform first on KBS's Music Bank.

On April 2010, Girls' Generation once again released a teaser for LG Cyon Cooky smart phone endorsement. A few days after the teaser was released, a short music video was made. The song is a modified and remix of the 1982 US hit "Mickey".

On May 2, 2010, SNSD ended promotions for both, the "Run Devil Run" single and repackaged album.