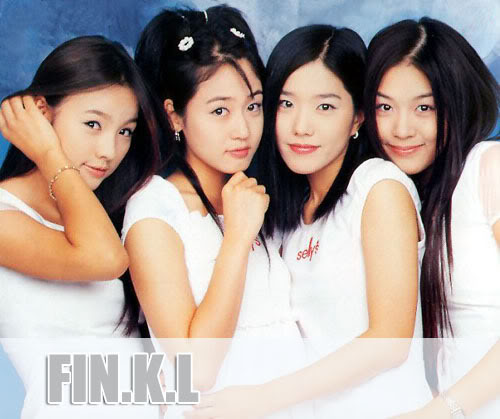 Fin.K.L was a K-pop girl group that debuted in 1998. Their name stands for Fine Killing Liberty, and was intended to mean that the group stood against "the oppression of all freedom" (fin means "ending" in French). The group's name was selected by a poll of young people by the record company before the group's inception. This is the reason for the lack of clear meaning in Fin.K.L's English name, for the Korean name was selected first.

Fin.K.L was one of the most popular girl groups in Korean pop, along with S.E.S.. Fin.K.L won numerous music awards until its unofficial end in 2002, when all of the members pursued solo careers in different areas of entertainment. Although they regrouped for a digital single in 2005, the group has since unofficially disbanded again, as each member has left DSP Entertainment and has signed with different companies. There has been no official word on the group's status. 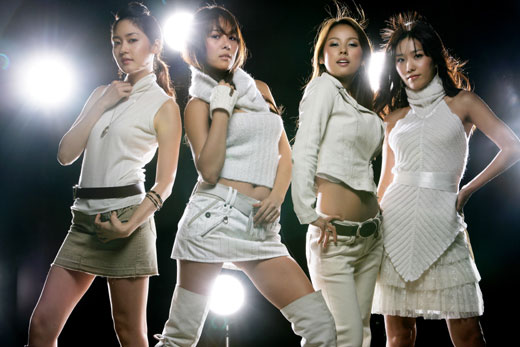 The first member to be discovered for Fin.K.L was its lead singer, Ock Joo Hyun. She was discovered through a radio singing contest, which she won by singing Mariah Carey's "Hero". Ock told her friend Lee Jin about this group and encouraged her to join; Lee was selected after singing Eco's (Blessed Me) for her audition. The next member to be selected was Sung Yu Ri, who was discovered while on a school field trip. As for the fourth member, Annie Lee (who formed Tashannie with Yoon Mi Rae) was accepted, but decided to depart after a few months. Lee Hyori, who was found while in a mall taking sticker pictures with friends, was brought into the group.


Fin. K.L debuted in 1998 with its first album Blue Rain. The trend of late 90's K-pop was to have groups sing cute, catchy music, as evidenced by the success of SM Entertainment groups S.E.S. and H.O.T.. In contrast, Fin.K.L's initial strength was in R&B ballads led by Ock Joo Hyun's vocals; this was shown by their first single, the title song from the album. Fin.K.L's next hit ("To My Boyfriend") was a more typical pop song and followed popular conventions at the time. (Yuki Hsu, a Taiwanese singer, sang a remake version of "To My Boyfriend" not long after the song's success in Korea.) They capped off their first album activities with a third single, "Ruby", which was a ballad about a lost love, and giving that love up for the good of everyone involved. The group also created a music video for a fourth single (which was eventually just left as a video and not promoted). 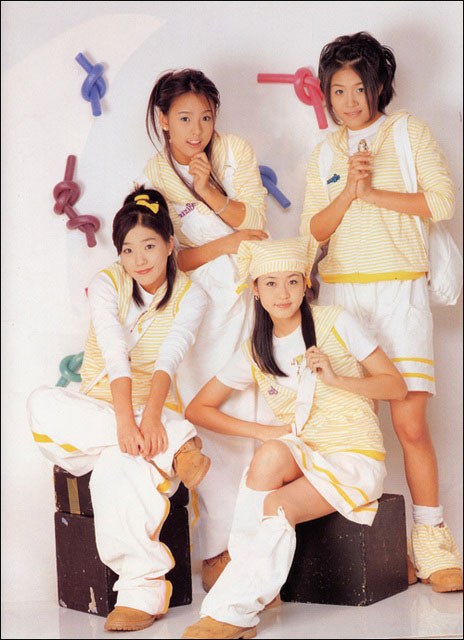 
Fin.K.L released a follow-up album on May 13, 1999, with White. Two hit songs from this album were ("Forever Love") and ("Pride"). Their second album had less of a focus on ballads, although the slow R&B song "Waiting For You" was performed occasionally. Also, Fin.K.L began limiting their music videos to one or two per album; a video was never made for "Waiting For You". Like their first, this album was very successful, selling almost 600,000 copies.


Fin.K.L released a "decimalized" or "half" album (which usually signifies either a limited or special release, such as a cover album or a themed record). Their first, their 2.5, was released on November 24, 1999, and their two most famous songs from this album were ("To My Prince"), a ballad, and "White", a seasonal pop song. S.P.E.C.I.A.L. also contained a remake version of ("Like An Indian Doll"), a popular song sung by Nami in 1989. No music videos were made in support of the album's release. The album sold in excess of 340,000 copies.

Because of its release date, Fin.K.L created a "winter" theme for their performances and dressed in wintry outfits to promote "White". To complete the theme, they often had fake snow falling during their "White" performances; however, this created a problem in that the snow was quite slippery, causing members and back-up dancers to slip and even occasionally fall. Due to the limited release of the album, Fin.K.L has a shorter promotion schedule. However, both of these 1999 albums helped Fin K.L win a Daesang, (the Korean equivalent of a Grammy) at the end of the year.


Fin.K.L's third album Now, released on October 6, 2000, emphasized the physical maturity of Fin.K.L members. Unlike the previous catchy tunes and cute outfits, Fin.K.L members were dressed in semi-formal attire for performances for the hit single "Now" (the album's title song). "Feel Your Love", their follow-up single, had their members in school uniforms that signified transformation to womanhood. Only "Now" was promoted with a music video and a busy performance schedule; the second single was relatively ignored. The album sold over 400,000 copies.


Fin.K.L released their second "half" album on April 13, 2001, 6 months after their last album. Melodies & Memories was a special album consisting of remakes of Korean hits from the 80s and 90s. Instead of targeting their main fanbase of teenage listeners, this album appealed to adults in their 20s and 30s by arousing nostalgia. Singles from this album include Ye-rin Lee's (Come On Baby Tonight)", and Eun-Yi Hye's 1981 single ("You Wouldn't Know"). Like their third album, Memories & Melodies only had one music video promoting the album (the one for). However, much effort went into this video, as it recreated scenes from four popular movies for each of the members, including scenes from Pretty Woman. Sales at the end of 2001 totaled 259,259 copies.


Their last album was released in the spring of 2002. The first single, ("Forever"), was a depressing ballad about waiting forever for a lost love. This was accompanied by a video depicting four tragic stories mainly about the loss of innocence: Sung Yuri became a prostitute, Ock Joo Hyun was a sick housewife, Lee Jin became a moody artist who eventually killed herself, and Lee Hyori was a boxer who lost a finger. This song became very popular, although it was not as heavily promoted as their other lead singles. Their second single, "Don't Go Away", was chosen by the fans via the group's website, because they felt that Fin.K.L did not have an upbeat single for a while. However, this single was performed for only a short time and was abruptly dropped. By the end of 2002, the album sold 261,518 copies.

Fin.K.L decided to go their separate ways, although not officially breaking up. Lee Hyori and Ock Joo Hyun have since released solo albums, while Lee Jin and Sung Yuri have acted in dramas and hosted various shows. At the end of 2005, the group made a comeback and released a digital single titled Fine Killing Liberty that had 4 songs (including the title track) and a music video. However, due to lack of promotion (as the group did not perform on the various music shows), the single failed to chart. Instead of ignoring the single, though, they have since released a special Fin.K.L Forever set that had two DVDs (one with their music videos and the other with various performances) and a photobook that also had the Fine Killing Liberty single in CD form.

They have continued to work in the entertainment industry and stay in the public eye. Sung Yuri has continued acting, starting with the drama (Bad Girls) and receiving positive attention for ("A Love for a Thousand Years"). Sung Yuri also played the lead roles in the dramas Prince's First Love and Platoon. She was also in the drama series, One Fine day and Snow Queen, she received high praise and won awards for both performances in 2006. Sung Yu Ri also starred as Heo Yi Nok in the drama Hong Gil Dong co-starring Kang Ji Hwan and won a Best Couple award. Lee Jin has also worked in television, hosting various shows and even joining a popular comedy show for a season. Both Sung Yuri and Lee Jin won "Best Actress" in their respective categories (drama and comedy) at the end-of-year awards in 2002. Lee Jin has also debuted in the Korean film industry and has tried to distance herself from her Fin.K.L image.

Ock Joo Hyun became very popular in 2004 due to her significant weight loss. Crediting it to hard exercise and yoga, she has now become a poster child for yoga in Korea, even launching her own yoga studio. Her third album is scheduled to come out in 2007. Lee Hyori, though, has been the standout solo member, releasing her first solo album in 2003 which catapulted her to the top of the charts and won her many advertising contracts. However, she encountered controversy on her second album's lead song "Get Ya", because it had elements that were very similar to Britney Spears's "Do Somethin'". Although she moved on to her second single "Shall We Dance", promotional activities were quickly stopped. Her 2007 single Toc Toc Toc, released in March 2007, reached #1 on the Music Industry Association of Korea's monthly charts.

In the fall of 2006, all the members of Fin.K.L have left DSPent and have signed on with different companies. Although there is continued speculation on the status of the group, Fin.K.L has not officially broken up as a group.

FinKL reunited and performed together on December 19, 2008 during a concert by Lee Hyori.