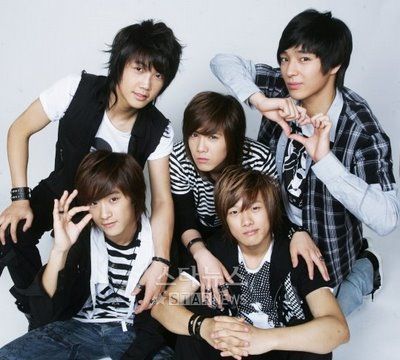 F.T Island, Five Treasure Island, or FTI, is a five member South Korean band. The name F.T. Island stands for 'Five Treasure Island', with each of the five members being a treasure. Their debut album, titled "Cheerful Sensibility", was the sixth best-selling album in 2007 only after few months debut. Their debut song 'Lovesick' stayed on top of every kpop charts for 8 consecutive weeks. Despite their young age, they're able to capture fan's hearts with their talents in music. Their first album in Japan also was the sixth best selling album by Oricon chart. Because of their successful achievement in most of their album and singles since first debut until now, they are currently being said as the most popular instrumental band in South Korea 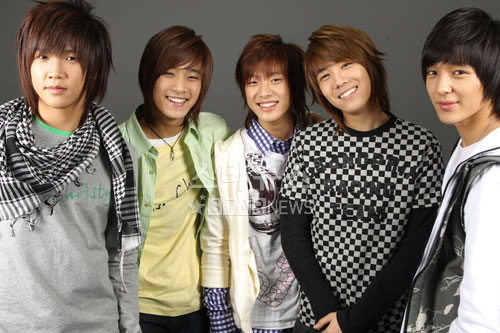 Other Work
* Sang for "You're Beautiful" OST with Miss $ (After departure from FT Island)
* Unstoppable Marriage (KBS2, 2008) cameo on Ep.62 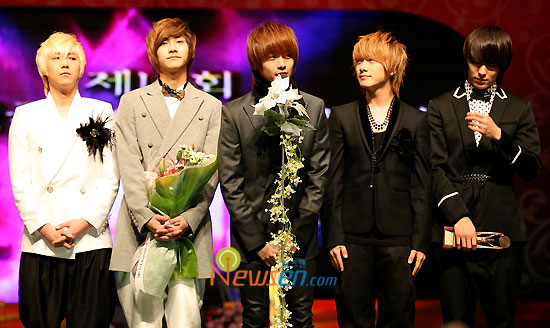 Although F.T. Island's first album was scheduled to be released commercially in May 2007, the members appeared on the show "Dugeun Dugeun Yeochinmandeulgi" (on the Korean television channel MNet instead to gain further notice in the media. The program title is officially translated by MNet as "Wanna Be My Girlfriend?,"although refers to the sound a heart makes. The band also performed on stage live at Rolling Hall and held their first official showcase at Live House Melon-AX, Gwangjang-dong in Seoul on May 27, 2007. On June 7, 2007 the group performed their debut song "Love Sick" on the music television program M!Countdown. This song stayed on top of the chart for 8 consecutive weeks in Korea. They received their first #1 M!Countdown and beat other top artists such as Dynamic Duo and Fly to the Sky just 2 weeks after debuting and continuouly captured fan's heart. They won a lots awards for this album.

Their first album, Cheerful Sensibility combined 13 songs that were divided into two parts: the "Emotional Chapter" and the 'F.T. Island Chapter" respectively, according to the genre of the songs. "Emotional Chapter" consisted of rock ballad, and the songs were produced by composers who worked for many songs of famous Korean singers such as SG Wannabe. The "F.T. Island Chapter" included upbeat songs of the pop and rock genres, and were produced by the Japanese composers who worked with the Japanese band, SMAP. The album sold 79,786 copies in 2007, making it the sixth best-selling album of the year. The album was re-released on December 3, 2007, titled "The Refreshment". In addition to three extra songs, the package also included various extras, including a photobook, a stack of photocards, and a mixing program called Music 2.0 which allows one to adjust the levels of the instruments and vocals accordingly. This edition sold 25,724 copies in December 2007.

Although F.T. Island was scheduled to held their first concert in Malaysia on March 30, 2008, at Sunway Lagoon Amphitheater their performance was canceled with no explanation. The group also held an autograph session at Damansara Cineleisure the previous day. A special version of their debut album was released in mid-February. On April 12, 2008, the group held their first concert in Thailand, at the Royal Paragon Hall. In addition to playing material from their album, each member of the group had their own solos as well.

Extending oversea, F.T. Island's Japanese debut album, Prologue of FT Island, was released on June 7, 2008, which yielded the airplay song "Soyogi". The album consists of 8 songs, 2 of which are newer versions of the original songs "FT Island" and "Primadonna". The last track, "Always Be Mine," is an English version of "First Kiss," though the lyrics are different than the Korean version. Music videos were also released for "Soyogi" and "Friendship". After their activities in Japan, the group returned to Korea, releasing their second Korean album Colorful Sensibility on August 27, 2008. A follow-up EP, Colorful Sensibility Part 2, was released on October 17, 2008. Later that year, on December 17, F.T. Island released "The One", their first Japanese commercial single, which hit #9 on the Oricon daily charts. F&C Music stated that although other Korean bands utilized the assistance of large Japanese record labels to gain popularity, F.T. Island was able to make it onto the charts without any true marketing efforts. Additionally, the single also became notable for being the last official released CD with member Oh Won Bin before his departure.

Rumors circulated that member Oh Won Bin would be leaving the group, and on January 28, 2009, the rumors were confirmed that Oh would leave the group and would be replaced. A day later, it was announced that F&C trainee Song Seung Hyun would be joining F.T. Island as a guitarist and backup vocalist. With the new lineup change, F.T. Island released the music video for mini-album lead song "Bad Woman." They also promoted it on SBS Inkigayo, and two days later, released the mini-album Jump Up.

After promotions in Korea ended, F.T. Island returned to Japan, where they released second Japanese single. It was the first time members contributed to their music as well, writing lyrics and helping with production. While member Lee Jae Jin co-wrote the second song "Moonlight Angel," leader Choi Jong Hoon helped co-produced it. I Believe Myself became the first single with member Song Seung Hyun's vocal. To promote their music, the group held several performances in Japan during the summer of 2009. Jump starting their Asia Tour, F.T. Island visited Singapore, Japan, Thailand, Taiwan and several others countries for several weeks. The tour kicked off in Singapore.[citation needed] For one hour, the five members performed their hit songs from their latest album, including 'Bad Woman,' to a full house of 900 fans from different countries. A couple of days later, the band left Singapore on an overnight flight after the performance ended.

In July, F&C Music released a jacket photo for the group's upcoming third album, Cross & Change. According to the information on the jacket photo, F.T. Island decided to try out several new music styles in their third album, which included ballads and several pop. The group also underwent an image change, adopting a "retro style", using so-called "Bokgo", which was inspired during the "jeans jeans look"-time from the 80s. To promote their third album, a music video teaser was released online featuring kids watching their idols (played by the members themselves) on TV. The lead single, "I Hope," was released on July 16. After activities and South Korea ended, F.T. Island flew back to Japan to release their third Japanese single, "Raining," on October 21, 2009. A music video of the title track of the single was also released. Member Choi Jonghun also played the piano for the title song instead of the usual guitar.

After several Japanese promotional activities, members Choi Jonghun, Choi Minhwan, and Lee Jaejin were put into the sub group F.T. Triple. The reason was believed to help take up some singing time during their concerts, so that lead singer, Lee Hongki, would not overstrain his voice. At one point in December 2008, main singer Lee Hongki's throat was having problems due to exhaustion, which lead to a several disappointing performances. Another reason was because of Lee's busy schedule with the filming of his drama You're Beautiful as well as Song Seunghyun's busy schedule. However, instead of Jaejin on vocals and bass and Jonghun on guitar, Jaejin now does the vocals and guitar with Jonghun playing the piano. Minhwan still plays the drums. Though the trio was unofficially announced at the Dream Concert in Japan as "A3" (the "A" representing the three members all having blood type A), they wanted to keep the F.T. name, thus added "Triple" at the end of it to represent that it is a trio. F.T. Triple's first single "Love Letter" was released with F.T. Island's 2CD repackaged album "Double Date" as part of the second CD "Two Date," which features all F.T. Triple songs. On November 14, 2009 in Seoul, F.T. Island kicked off their national tour, titled Men's Stories. They held a lot concerts focusing in Southeast Asia like Singapore, Bangkok, Hong Kong, Taiwan, Shanghai and On March 6, 2010, they held their concert at Manila, Philippines at PICC Center. Their concert ended successfully with the tickets in some countries were sold out just within one hour.

After celebrating their 1000 days, which happened to be the same day as Lee Hongki birthday, they flew to Japan and will stay there until the end of August for their Major Debut under the combination of new Japanese label company, Warner Music Japan and their official label company, F&C Music. Because of their boosting popularity nowadays, Warner Music step forward to offer this group a bigger promotion in the Japanese Market. On May 19, 2010, F.T. Island will release their new single under Warner Music. In order to do a bigger promotion, Warner Music needs the group to stay there for 5 months for more activities like fanmeeting, magazine, interviews, short concert etc. After promoting single, F.T Island will focus on their comeback album in Korea, which should be released in September 2010. It is believed that their 6th album will be a bomb since it is a combination of both F&C and Warner Music. They'll also have their new Japanese show which will be aired starting 7th April.

2nd I Believe Myself


OST (In Soon Is Pretty OST)