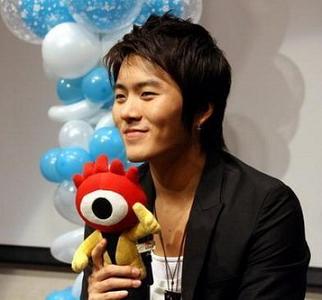 Eru was born on July 5, 1983 in New York, USA to Korean parents. He is the second and youngest son of one of the most popular and veteran Korean trot singer, Tae Jin Ah (real name: Jo Bang Hun). Eru lived in New York until he was 7 years old, then his family moved to South Korea, where he attended Seoul Academy International School and TCIS.

Eru always wanted to be a producer so he composed many songs. But after a while, he decided that he didn't want other people to sing his songs. He wanted to sing them himself. He thought that the person who composes the songs understands them better. That's when he decided to become a singer.

Eru went through two years of training before making his debut as a singer in 2005. Eru's debut album included works from musicians such as Joo Young Hoon, Lee Hyun Jung (the composer of Big Mama's "Break Away"), and vocal trainer No Young Joo, who trained BoA, Fly to the Sky and Lee Soo Young. A 100-member string orchestra also participated in his debut album. The first single from his 1st album was ("Rebirth").

Eru released his 2nd album Level II on September 16, 2006. The first single from his 2nd album, ("Black Glasses") which features singer Daylight, gained significant popularity among young people and topped on- and offline charts. The song would later be showered with numerous awards, including Jukeon's song of the month (October 2006) and SBS's Bonsang Award. The music video was also popular among his fans, as it featured Kim Hyun Joong of SS501, Lee Young Ah and Ahn Sung Ki.

After the huge success of of his first single, Eru released his second single ("White Snow"), which he wrote himself. It was also successful, reaching #1 on various online charts and winning several awards, including Cyworld's Song of the Month (January 2007). The music video was shot in Sapporo, Japan and featured Eru and entertainer Lee Hyun Ji. Aside from his own music videos, Eru appeared in female singer Magolpi's debut music video "Flight Girl", where his role was as a composer, along with six other Korean artists, including Micky YooChun of TVXQ, Kang In, Hee Chul and Shin Dong of Super Junior, Park Joon Hyung of G.o.d., and Kim Jang Hoon.

In March 2007, Eru received an offer to appear in a Japanese movie titled Three Tattoos. Eru's agency stated that the offer was quite tempting, as the movie was being directed by Sukimori Hitomi and would likely be exported overseas. However, Eru's agency also stated that Eru would reject the offer as he has yet to establish himself in Korea as an artist.

Before his debut, he also appeared as one of the main characters in his own father's music video, (Not everyone can love) If you watch this video, you can see that this was when he was very obese. At the time of this music video, he weighed approximately 115 kgs! Now, after his successful diet he weighs close to 70 kgs.

In late December 2007, Eru released a statement revealing his intentions of fulfilling his military service duties in the latter half of 2008, since he became a Korean citizen 2 years ago.

His first solo concert took place on February 16, 2008 in South Korea. In addition to his singing activities, he was attending Dankook University.

In May 1st 2008, Eru entered the boot camp to start his mandatory military service at Nonsan Military Training Center. Eru will stay there for four weeks to receive basic training and then be assigned to public service duty. Eru will be on duty 2 years and 2 months.