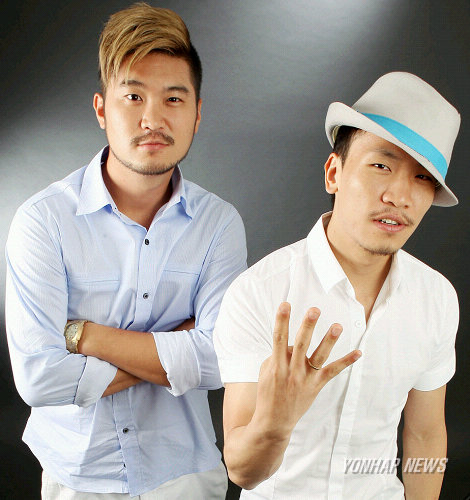 Dynamic Duo is a Korean Hip Hop duo, made up of members Choiza and Gaeko. Unlike the rough and off beat sound of their past group, CB Mass, Dynamic Duo changed their style to a more audience-friendly sound with a brighter ambiance. They debuted with the album Taxi Driver, which was released on May 17, 2004, and it became the best selling hip hop album in South Korea that year recording 50,000 sales in its first month of release. Their second album (Double Dynamite - Operating Manual) then won them their first Best Hiphop Album in the prestigious Korean Popular Music Awards in 2005. After their success, they decided to form a record label and named it Amoeba Culture. Dynamic Duo have been known to feature many artists in their songs including Sixpoint and Na Ul from Brown Eyed Soul. Gaeko and Choiza have expressed distaste at the recent surge in "radio-friendly rap musicians like Cho PD and MC Mong" and they have tried to maintain credibility by limiting their work to appearances at clubs, concerts, music video's and cable TV whilst avoiding TV appearances which are popular in Korea amongst musicians striving for commercial appeal. They have released five albums to date.

Choiza and Gaeko have a long history together. They met in 6th grade and have shared much of their lives together allowing them to connect in ways that few groups are able to do. Before starting Dynamic Duo, the two formed the underground hip hop group kod along with Sixpoint and ZASON, joining in 1998. Within a year, Sixpoint left the group to concentrate on his studies, and the group disbanded. That same year, Choiza and Gaeko met Curbin and created a new group, CB Mass with just the two of them and Curbin. The group debuted in 2000 and released a CD to moderate success. They later released a second CD, but the producer Curbin was caught stealing all the profit of the album for himself. CB Mass broke up in 2003 because of the incident. In December 2003, the two friends decided to start a group on their own and named it Dynamic Duo.


Choi Jae-ho was born March 17, 1980 (1980-03-17) (age 30) in South Korea. He attended Sejong University where he studied hotel management. He lists his hobbies as reviewing movies and building computers.