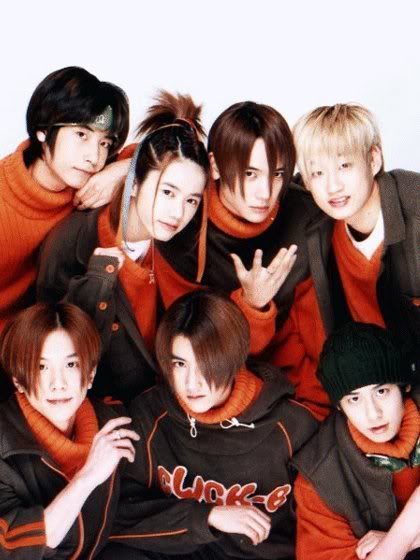 Click-B is a former seven member turned 3 member South Korean pop and hip hop group. They were formed in August 1999 under Daesung Entertainment (DSP), the same company as Fin. K.L. and the former Sechskies. Click-B started out as a unique band combining rock and dance beats in their music. The band split in 2002, with 4 members remaining. Most recently, they joined the k-pop group J-Walk to form JnC. Then member Kim Tae Hyung left the group after their 4th album to pursue personal interests.


Kim Tae Hyung (born March 19, 1981) is the leader of the band. He is currently doing service in the army of Korea.


Woo Yeon-Seok (born May 13, 1980) is the oldest member of the group. His position was rap and vocal. He attended Kyunghee Cyber University, Department of Global Management. In June 2006, he released a digital single, "Baby Boo". Then in July 2007, he formed a duo group named Mainstream with his good friend MC K and released a digital single "One Rainy Day" where he also acts for this music video. Mainstream released their 1st official album in August 2007 with title song "Sting" where Sanghyuk was starred in this music video.


Oh Jong Hyuk (born February 16, 1983) was the lead vocal. He, like the other two members, attended Kyunghee Cyber University, Department of Global Management. In 2006, Jong Hyuk released his first solo album OJ Issue and later came out with a digital single in 2007.


Kim Sang Hyuk (born May 7, 1983) was one of the vocals and bass for the group. Like the other current members, he also attended Kyunghee Cyber University, Department of Global Management. He runs his own internet shopping mall.


Yoo Ho Suk (born December 8, 1983) was one of the vocals for the group. He left the group in order to study overseas but came back as a solo artist under the new stage name Evan. He has since released two albums: Hard to Breathe and Pain Reliever, his first and second album respectively, under TN Entertainment (owned by former H.O.T. member Tony An). His songs primarily show strong jazz influences, as he studied the music genre when he was in America.


No Min Hyuk {born December 24, 1983} played the guitar for the group. He still composes many songs and some of his songs were in Click-B's last album, Cowboy. He is now part of the trio ????? (AshGray).