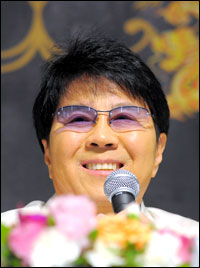 Cho Yong-pil (also written Jo Yong-pil) is a South Korean pop singer born in 1950. He is considered to be an influential figure in Korean pop music.

Cho Yong-pil was born in Hwaseong, South Korea. When he was seven, he happened to listen to Ray Charles playing the harmonica, and this influenced young Cho to play music.

He formed a band called Atkins (Aeteukinjeu, a country & western group, and played in the U.S. Army. After, he founded Five Fingers (Hwaibeu Pinggeoseu), which played music by black artists.

In 1971, he joined the band, Kim trio (Kim Teurio), which motivated him to perform rock music.

His debut single, "Dorawayo Busanhange" (Come Back to Busan Port), brought him to national attention when it was released in 1975, and later became a hit in Japan. Cho then made a Japanese language version of the song, and sang live in Japan. His first album, Chang bakkui yeoja (The Woman outside the Window), was released in 1980 and has been followed by many others.

His commercial success is declining after the appearance of renowned group, Seo Taiji and Boys and many other young musicians. His studio albums released after 1992 were not quite successful. Noticing this, he announced that he is going to quit appearing on television, concluding that he will hardly make any hits. Subsequently, he focused more on concerts. In 1993, his Busan concert attracted an audience of 1 million, a record for South Korea. In 2005, Cho performed a concert in Pyongyang, North Korea, an extremely rare event for a South Korean singer. He performs over thirty concerts per year.