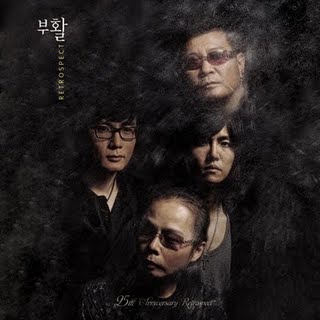 Formation and the 80's

Kim Tae-won changed the name of the group from "The End" to ("Boohwal") in '86 following the departure of the vocalist Kim Jong Seo. They led the heavy metal boom in the 80's along with other bands such as Baekdoosan, Sinawe, H2O, and Black Hole. Boohwal, Baekdoosan, and Sinawe were called the 'Big 3' by the media as they were all led by talented guitarists (Boohwal - Kim Tae Won, Baekdoosan - Kim Do Kyun, Sinawe - Shin Dae Chul), had unique talented vocalists and all aimed to create heavy metal music. However, unlike bands like Sinawe, they have been concentrating more on Korean-style melodic rock ballads, especially after their 3rd album.

After receiving high praises in the underground music scene for their music, they became instantly popular once they released their first major album. The album featured the most popular vocalist to come out of Boohwal, Lee Seung Chul. The title song, (Heeya) became an instant hit. Kim Tae Won produced bell ringing sounds with his guitar for that song and many aspiring guitarists tried to mimick it. The 2nd album, also with Lee Seung Chul, was also a big success. Their success was a result of many aspects, including Kim Tae Won's ability to write beautiful songs ranging from rock to ballad, Lee Seung Chul's ability to sing, and Boohwal's overall talent for music. However, Lee Seung Chul and Kim Tae Won went their separate ways in 1988. Kim Tae Won worked on many side projects until getting the band together for their 3rd album.

After regrouping, they released their third album in 1993 featuring the hit single (Sarang hal soo rok - The More I Love). The album was a success, partly due to the emotional story of Kim Jae Hee finishing the recording after his brother Kim Jae Gi, the original vocalist at the start of the recording, who died in a traffic accident. Rock music didn't fare well as they did in the 80s with the emergence of dance music as the most popular genre of music in the 90s in Korea. Although Kim Tae Won kept Boohwal from disappearing as many other rock bands did during that time, they went through many lineup changes.

In 1997, Kim discovered another talented vocalist, Park Wan-Gyu and recorded Boohwal's 5th album with their title song "Lonely Night" succeed making a big hit in Korean music industry once again. Park did not stay long in Boohwal, and Boohwal started another search for a new vocalist.

In 2002, they teamed up with Lee Seung-cheol again, releasing their eighth album,(Sae Byuk  Bird, Wall). The title song, "Never Ending Story", was one of the most popular songs that year. With this album they not only regained popularity among the older fans who remember them from the 80s but also teenagers who thought was a newcomer. Although most people welcomed the new album, some critics argued that Boohwal's music had become too soft, especially Kim Tae Won's style of playing the guitar.

2005 marked Boohwal's 20th year anniversary. They have been one of the most prominent Korean bands, making music for more than 20 years. They continue to create melodic rock with talented vocalists and talented musicians. Many popular singers went through Boohwal including Kim Jong Seo, Lee Seung Chul, Park Wan Kyu, and others.

20082009 was a turning point for Boohwal, when its leader, Kim Tae Won, showed up on many different variety shows hosted by MBC, SBS, and KBS. He eventually became a regular on the currently-popular show The Qualities of a Man, which is the second part of the KBS show Happy Sunday. Also, with their new vocalist, Jung Dong Hwa they started to attract more fans, surprisingly girls.