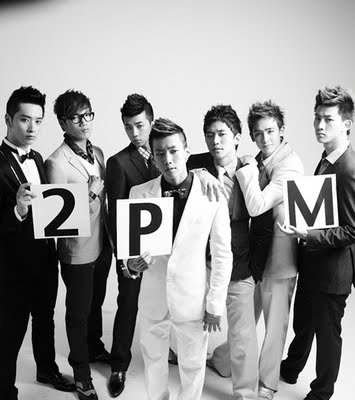 2PM is a South Korean boy band, originally a seven-member group, but currently consisting of six members due to sudden withdrawal of leader Jaebeom following an Internet controversy in September 2009. They are managed by JYP Entertainment. The current members are Junsu, Junho, Nichkhun, Taecyeon, Wooyoung and Chansung.

2PM is one of the two subgroups branched out from the eleven-member (before Jaebeom's departure) boy band One Day, the other being 2AM. They debuted with the song "10 Jeom Manjeome 10 Jeom" (10 Points Out of 10 Points), which showcased their acrobatic and b-boy dance styles. They achieved their first #1 song with "Again & Again".


Born in Daegu, South Korea. Prior to singing, Junsu had entered and won various poem- and song-writing contests . He originally auditioned for YG Entertainment, where he befriended G-Dragon and Tae Yang of Big Bang. He was accepted into both YG & JYP Entertainment, but chose to take the path of JYP in his final decision.


An American citizen of Thai and Chinese descent, he was born in Rancho Cucamonga, California. He spent his childhood in Thailand and in California and studied abroad in New Zealand. He returned to the States for high school at Los Osos High and was scouted by a JYP talent agent in Hollywood, California while he was attending the Korean Music Festival in Los Angeles. Nichkhun was confirmed to star in 2010 film "The Shining Diploma". However, due to scheduling conflicts, he was forced to drop out.


Born in Seoul, South Korea. As a young child, Taecyeon (along with his family) emigrated to Bedford, Massachusetts, where his parents and older sister still currently reside. He originally auditioned for JYP Entertainment in New York City to become a model. Taec was also on the same audition show as Junho and Chansung, Superstar Survival, but was the first contestant to leave the show. He featured in "Yes I'm In Love" by Bada on her 4th album and Baek Ji Young's 2009 song (My Ear's Candy). He currently hosts SBS's music show Inkigayo with Wooyoung, and will be a permanent cast member on Family Outing 2. He debuted as an actor in the 2010 KBS drama series ("Cinderella's Sister") alongside Moon Geun Young and Chun Jung-myung.


He is from Busan, Korea and was selected as a JYP trainee through MGoon's JYP auditions, of which he won first place against 5,000 other candidates. Before debuting in 2PM, Wooyoung filled in as a dancer partner with Wonder Girl Yoobin when TOP from Big Bang fainted the day before the special performance with the Wonder Girls during the 2007 MBC Music Awards. Wooyoung currently co-hosts SBS's music show Inkigayo (with Taecyeon) as well as KBS's celebrity talk show Win Win.


He is from Ilsan, Korea and earned a contract with JYP Entertainment after winning the "JYP's Superstar Survival" talent search (which Taecyeon and Chansung were also contestants in) in 2006, placing 1st out of 6,000 competitors. Junho is now also a part of the KBS sports variety show Dream Team 2.


Chansung acted in the Korean sitcom "Unstoppable High Kick" prior to his debut with 2PM. Chansung participated in the same survival game as Junho but lost. He auditioned a second time and was accepted into the company. He rapped in 2AM's song (To Her).


Jaebeom was born and raised in Seattle, Washington. Originally entering JYP Entertainment as a rapper and b-boy, he trained for four years to improve his singing and Korean. It was initially his mother who led him to apply as he wished to not attend college, and Jin-Young Park (JYP) himself watched his audition and brought him to Korea. He collaborated with Yeeun of Wonder Girls for ("Jeong") on the Han Sung Byul Gok OST. Due to his comments on his MySpace page, he left the group on September 8, 2009.[47] On February 25, 2010, JYP Entertainment announced that Jaebeom's contract was permanently terminated. 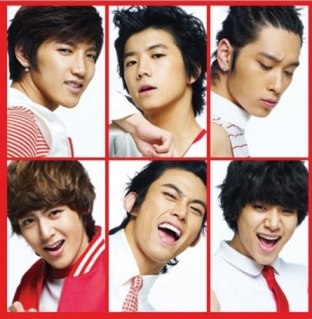 The members of 2PM all auditioned (except Nichkhun, who was scouted) to become part of JYP Entertainment, to which the Wonder Girls & 2AM also belong. Some members held their auditions in other countries; for example, Park Jaebeom auditioned in the United States. Other members already had experience in the entertainment industry prior to their acceptance into JYP Entertainment, such as Kim Junsu, who had won various singing competitions, and Ok Taecyeon, Lee Junho and Hwang Chansung, who had participated in the show 'SuperStar Survival'.

2PM's and 2AM's training days were filmed in a documentary called Hot Blood Men, which aired on Mnet. The show documented the time by time training program of the JYP trainees who were to be part of the group "One Day", as well as the elimination of three trainees from the group during the time.

On April 16, 2009, the group released their second mini album 2:00PM Time For Change, which they began promoting on April 23. On May 9, 2009, they won their first Mutizen Song award on M!Countdown since their debut; in the same week, they won their second Mutizen on SBS Inkigayo. The group earned their third Mutizen the following week, completing the triple crown and making them ineligible to win for the following weeks. However, the award that had been eluding them - Music Bank - was quickly won soon after. On June 11, 2PM began promotions for "Niga Mipda" (I Hate You) on M!Countdown. On July 2 and 3, 2PM achieved first place on the M!Countdown and Music Bank charts for the song "Niga Mipda". They achieved the triple crown for the song on M!Countdown by July 16. On July 30, 2PM won the 'Only One Song' award on M!Countdown.

2009: Controversy and rise to prominence

On September 4, 2009, articles surfaced on the internet regarding Jaebeom's posts from 2005 on his personal Myspace account, in which he expressed his dislike for Korea while still a trainee for JYP Entertainment. Jaebeom issued an apology regarding this matter. Although outraged protesters demanded that Jaebeom should be forced out of 2PM, JYP Entertainment CEO Park Jin-young stated on September 7 that he was going to continue to remain part of the group. The following day, Jaebeom announced on his official fancafe that he would be leaving the group and returning to the United States, with plans of going back to school and bettering his understanding of music, and also apologized to the other 2PM members for not being a good leader and older brother to the group. Park Jin-young has confirmed that he will respect the singer's decision, and that 2PM will continue on as a 6-member group. Additionally, due to the sensitive topic of Jaebeom's departure, all 2PM members were withdrawn from their regular appearances on variety shows.

The group finished re-filming their music video for "Heartbeat", the title song of their first full-length album, without Jaebeom on October 31, 2009. During a press conference, it was revealed that Jaebeom's vocals would not be removed from the songs. The day after the now 6-member 2PM's full-length album was released, Park Jin-young released a statement that Jaebeom would return as a member of 2PM if he wanted to make a comeback, while indicating that his return was not imminent.. In further support of Jaebeom's place in the group, the six 2PM members have also decided to distribute their income from their 1st album with him, sending him an equally divided amount of the earnings.

The group's first full length album, titled 1:59PM, was released on November 10, 2009. Both the album and title track, "Heartbeat", quickly rose to the #1 position on multiple music sales charts. The group made their first comeback performance, signifying the beginning of their promotional activities for the album, on M.Net's 'O Good Concert' on Thursday, November 12, 2009, subsequently making their KBS Music Bank, MBC Music Core and SBS Inkigayo comebacks on Friday, November 13, Saturday, November 14 and Sunday, November 15, respectively.

On November 20, 2009, 2PM performed at and was honored with two awards by the M.net Asian Music Awards (previously known as M.net KM Music Festival): the award for Best Male Group and Artist of the Year (the latter being one of the three most prestigious awards, or "Daesang"s, at the show, which also include Song of the Year and Album of the Year). The group paid homage to him during their performance of "Again & Again", in which a spotlight was shown over Jaebeom's usual position in the dance formation and his vocals were not replaced.

On November 26, 2009, after two weeks of promotional activities for the 1:59PM album, 2PM earned their first #1 on a TV music show (KBS Music Bank's "K-Chart") since the album's release, with "Heartbeat", which went on to take #1 on the K-Chart for three more weeks. In addition, "Heartbeat" achieved the "Mutizen" song award Triple Crown on SBS Inkigayo by being the #1 song the Inkigayo "Take 7" chart for three weeks, the maximum amount of time for which a nominated song is eligible to win. On December 30, 2009, at Korean Broadcasting System (KBS)'s end of the year Music Festival, "Again & Again" was recognized as "Song of the Year", winning with 57,060 votes.

2PM followed up end-of-2009 activities with the second single off of 1:59PM album, "Tired of Waiting". The song was performed live for the first time at the SBS Music Festival on December 29, 2009. 2PM's promotion for the album ended with their SBS Inkigayo performance on January 17, 2010.

On February 25, 2010, JYP Entertainment announced that Park Jaebeom would not be returning to 2PM, as his contract with the company had been permanently terminated. A fan meeting/press conference was held two days later with the 6 remaining members of 2PM and JYP Entertainment CEO Choi Jungwook in attendance, where it was announced that although 2PM would continue promoting as 6 members, a new leader would not be chosen to replace Park.

In mid-April 2010, 2PM released image and video teasers for their third single Don't Stop Can't Stop, for which the group promised to showcase an even stronger side of themselves than before. The EP, containing six tracks, was released on April 19, 2010. The lead single, Without U, quickly rose to the #1 position on 6 different music charts. The group made their television performance comeback on Mnet's music program M! Countdown on April 22, 2010.

2PM has been confirmed as the opening act for their label-mates, popular girl group Wonder Girls for 9 shows on the latter's United States headlining summer tour . 2PM also performed at the 8th annual Korea Times Music Festival in Los Angeles, California on May 1, 2010 , and will also be performing at the Dream Concert in Seoul, South Korea on May 22, 2010