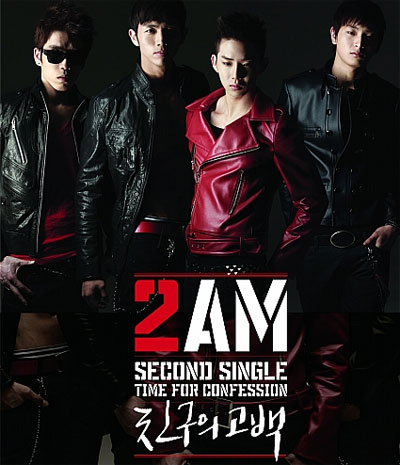 2AM is a South Korean four-member ballad boy band under JYP Entertainment. The members are Jinwoon, Jo Kwon, Seulong, and Changmin. 2AM is one of the two subgroups branched out from the eleven-member (before Jaebeom's departure) boy band One Day, the other being 2PM. They officially debuted on July 11, 2008 on KBS's Music Bank, performing their debut song "This Song". They won their first Mutizen at Inkigayo on February 7, 2010 with "Can't Let You Go Even If I Die".

Along with the members of 2PM, 2AM appeared on the documentary Hot Blood that was aired on Mnet, documented their rigorous training program of their pre-debut days. Changmin was the only member of One Day to not appear in the documentary because he was serving in the military at that time. Initially, Jinwoon was eliminated on Hot Blood, but he ended up in 2AM due to Daehun's withdrawal from JYPE. JoKwon trained for 2567 days, 10 days past 7 years after joining JYPE.

2AM made a comeback with another single album "Time For Confession" on March 19, 2009 with ("Confession Of A Friend") being the title track.


2AM revealed on March 5th, 2010 through their official home page cuts of their new image. Jo Kwon, Changmin, Seulong, and Jinwoon respectively transformed as a club DJ, an ice hockey player, a biker, and a basketball player for their new 10 minute drama-music video. The repackaged mini-album will feature 4 additional songs, 3 from their first and second singles and one entirely new song titled ("I Was Wrong"), which would be their promoted track. One representative stated, "The song we're releasing is something that 2AM has never shown before and is a brand new type of music. "A portion of the song was revealed in the first episode of 2AM's new reality show "2AM DAY" on March 10th[4], where the members playfully sing along to it in their car. 4 teasers were released for each member from March 12 to March 14. A leaked version of Part 1 of the music video was released on March 15, having been recorded by camera at 2AM's subway showcase. The album was released on March 18, 2010 and this song won the Mnet M!Countdown on April 1, 2010

2AM endorsed up to $1 million for products commercials in early 2010, including Pepsi and BHC Chicken. It was also announced that 2AM would be the new faces of Samsung's "Dugeunduguen Tomorrow" campaign, following after 4Tomorrow in 2009.

In April 2010, they participated in the original soundtrack of drama series "Personal Taste" with a ballad titled ("Like A Fool"), which also became a no.1 hit. 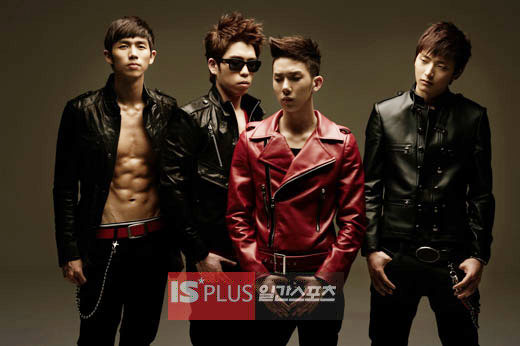 Born in Busan, South Korea, Changmin finished his mandatory army service before debut, being the only idol to have entered the entertainment scene with a completed army service. In December 12, 2008, he featured in Mario's digital single "Superman". On February 5, 2009, he and Jo Kwon released a digital single titled ("Graduation"). In December 2009, he contributed to the original soundtrack of drama series (" A Dream Comes True") with a solo single ("Don't Swallow"). He was a regular DJ for "Starry Night Radio" with Girls' Generation's Sooyoung.

He was part of "Dirty Eyed Girls" on an episode of 2PM's reality show "Wild Bunny", performing a parody of popular Brown Eyed Girls song "Abracadabra" with Jo Kwon. The music video became extremely popular. Seulong and Jinwoon make regular appearances as commentators for We Got Married Season II. He debuted as an actor in drama series "Personal Preference", the first episode airing March 31, 2010.

The leader of the group, Jo Kwon is the longest-serving trainee in JYP Entertainment. He was chosen as last members of Park Jin Young's 99% Challenge project along with Sunye of Wonder Girls.

He was part of "Dirty Eyed Girls" on an episode of 2PM's reality show "Wild Bunny", performing a parody of popular Brown Eyed Girls song "Abracadabra" with Seulong. He joined the cast of We Got Married on October 3, 2009, coupled up with Brown Eyed Girls member Ga-in. Although they were initially only supposed to feature for the Chuseok special, their appearance brought in the highest ratings yet for Season II, and they were announced a permanent couple. In 2010, he became a permanent member of Family Outing Season 2.

He starred in 8eight's music video ("Goodbye My Love") with Kim So Eun and Jung Gyeo-Woon, as well as singing in May Doni's song ("Don't Know-ing") with Jo Kwon on January 15, 2009. Seulong and Jinwoon make regular appearances as commentators for We Got Married Season II.

In January 2010, Jinwoon was diagnosed with an early case of H1N1, but recovered quickly before the illness took effect. He became part of the cast of (Idol Maknae Rebellion) along with the other youngest members of fellow idol groups FT Island, U-Kiss, T-Max, Mighty Mouth and later MBLAQ. The first episode aired on November 7, 2009. 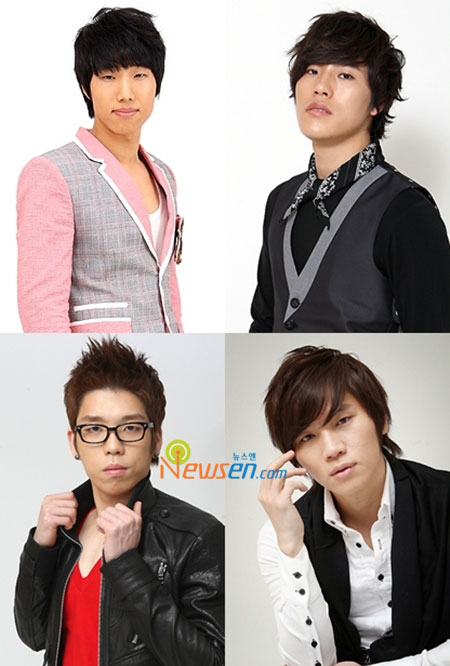