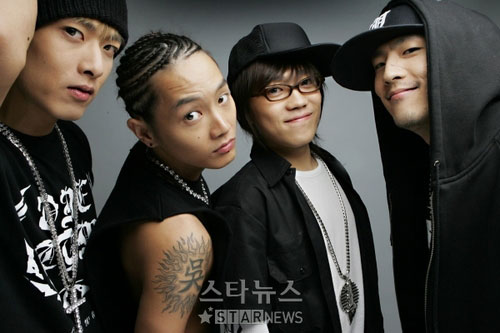 Jinhwan was a dancer for Jinusean (in a crew named Hi-Tech) before being in 1TYM, and that's where YG recruited him. On the producing/songwriting side, he doesn't do much, but he has a very distinctive, nasal, monotonous rapping style.

He did his army service until 2008 (like most Korean males, he has to do a couple of years of military service). He went through a few months of basic training, and now hes working in a courtroom. This is why 1TYM has been put on hiatus, but they're expected to return some day.

Teddy was born in Korea, but his family moved to New York City when he was in middle school. He lived in an area without much ethnic diversity, so he was the only Korean in his school and his friends were mostly African-American. Then his father got transferred to Los Angeles, and Teddy went to Diamond Bar High School.

He met Taebin at a party where Taebin was standing around acting cool and making his younger friends buy him food. Taebin asked to try on Teddy's hat, and they've been friends ever since. Together, they auditioned at Brothers Entertainment and got introduced to YG this way.

Teddy was an English major at Myongji University but left during his second year. He and Taebin moved to Seoul for 1TYM, and they shared an apartment for a while. They often go back to the US together and stay with Taebin's family in Los Angeles or at Teddy's house in New York.

Teddy has dual nationality, and because of recent laws he could be forced to fulfill his two-year military obligation if he stays in Korea. This is probably what caused his visa problems around the fourth 1TYM album, and it's one of the major reasons why he spends a lot of time in the US, and why he sometimes isn't present during 1TYM promotion.

Musically speaking, Teddy didn't have much input in the first album aside from writing his raps (Baek Kyoung and Perry did most of the composing and wrote most of the lyrics). However, he slowly started writing his own songs - he credits Perry for teaching him how to write and produce by himself - and now he's 1TYM's main songwriter and writes songs for other YG artists. He can play bass, electric guitar and piano.

Since the start of 1TYM's hiatus, Teddy has been writing and producing a lot of songs and he's currently 2NE1's main producer. The constant stream of hits he wrote in the last year or so attracted attention from foreign producers - he was offered the chance to write a song for American artist Lady Gaga, but turned it down to focus on 2NE1's music. He was also listed as 10Asia's Top 10 People of 2009 because of the top charting hits he has produced.

Originally, YG rejected Baek Kyoung for 1TYM, but he persisted and nagged his way in, which is a good indicator of his personality in general. He's very determined in everything he does, and he said in interviews that he couldn't picture himself doing any job other than music.

He's a sound engineer and producer for 1TYM and writes a lot of songs. He likes a variety of music, particularly jazz and funk, which have a fair deal of influence on the music he writes. In addition to songwriting and producing, he raps and oftens does background vocals for Taebin. He speaks Japanese fluently and plays the piano and saxophone.

Currently he's is a DJ at a club in South Korea.

Taebin grew up in Diamond Bar, California, which is on the outskirts of Los Angeles. When he was a kid, he wanted to be a really effective, elite lawyer or the president. He met Teddy when he was in high school and auditioned at Brothers Entertainment with him.

Taebin is the lead singer in 1TYM, but doesn't compose songs and rarely writes lyrics. He released a solo album in 2004. There has been rumors about a second solo album, but YG said that it's most likely not going to happen.

Family means a lot to Taebin. The tattoo on his right bicep says For Life (being the hanja for Im), and he's been seen chanting his family name backstage before performing.