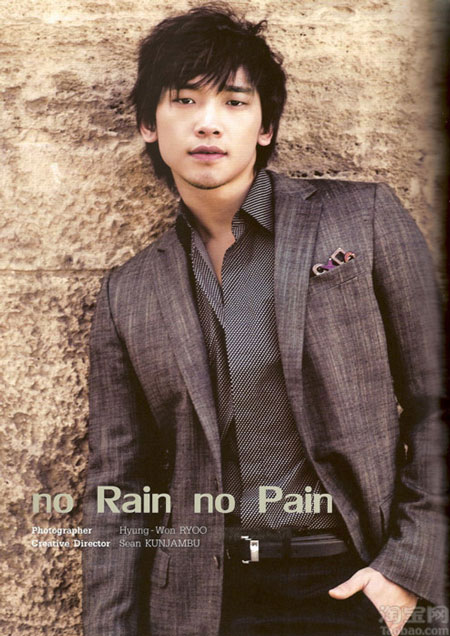 He started his career as a singer, then let his name be known around the world as he became an actor! Everyone seems to know of him...

With a full Asia schedule coming up, Rain held a fan meeting in Korea entitled "Summer Vacation with Rain." It was HELD in Korea, but the event was packed with fans from ALL over! A total of three THOUSAND Korean AND international fans. All waiting for the SAME thing -

Finally Rain appeared and the location FILLED with the cheers from the crowd! The singer danced his heart out for the fans. He wasn't holding ANYthing back! Every fan meeting of Rain's was led by emcee Kim Je-dong! He was adored by Rain fans, as well.

The fans had prepared a lot for this event, too! They put on some talent shows, played games with Rain, and threw him a great birthday party COMPLETE with gifts! Rain thanked them with a song. Rain had come back to Korea after the shoot ended in Berlin, Germany. He was 10kg lighter, but more fit, too.

Rain was immediately a HOT commodity in the music biz. Then, in 2003, he started on his road to acting with a TV drama. A lot of people were afraid that he might not do very well, but the singer had a natural talent for acting, too! ACTOR Rain conquered the hearts of the Korean public, then went on to the global stage.

After his World Tour, Rain wasn't able to return to Korea. He was busy filming overseas, and after THAT was finished, he had to film ! Even such a SUPER-star gets homesick though, right? Rain had his own ways of dealing with homesick-ness or stress.

As time goes by, the "Rain trend" seems to spread quickly over more countries in different continents! What WAS the secret behind his popularity and success?

Rain debuted in 2002 with his song, He's now a 6-year veteran vocalist of K-pop, and it shows when he fires up the stage like a super-charged turbo of a fine-tuned car. But this mega-star, who could have anything, likes to divulge himself in the most BASIC and simple way.

With work in Hollywood, all over the US and then to Europe, Rain spent about a year out of the spotlight here in Korea. But now, he was back and he promised to give all that he's got to make up for the time he's missed.

He's taking a break from acting, and Rain returns to us as the SINGER Korea fell in love with in 2002! Now, he has the talent to produce his own albums - something he'll use when he storms K-pop in the second half of 2008. We welcome the Hallyu star back to Korea.

Rain, born Jeong Ji-hun on 25 June 1982 in Seoul is a male Korean R&B and pop singer. He is well-known in East Asian countries such as Korea, Japan, Taiwan, China, and Thailand as a leading star of the Korean wave. He has been called the "Asian Michael Jackson" or the "Asian Justin Timberlake." Rain is becoming more and more popular, and is now at the level of an international star. He will make his debut in the United States soon.