The Kingdom of The Winds 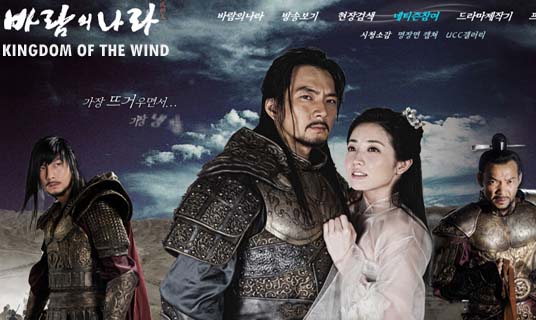 Also known as: Country of Wind / The Land of the Wind


Brief Synopsis
The drama about the life of Jumong's grandson, Moo Hyul, who later became Daemusin.

KBS will premiere Sept. 10 the historical drama "The Land of the Wind," featuring Song Il-kook's return to TV as King Daemushin of the Goguryeo Kingdom (37 B.C.-A.D. 668). The cast and production team recently returned from China after spending more than 40 days filming battle scenes.

The drama is also based on the popular historical cartoon by Kim Jin. "Land of the Wind" will also be Song's third historical drama, following "Jumong -- Prince of Legend (2006)" and "Haeshin -- Emperor of the Sea"(2004).

The Kingdom of The Winds trailer