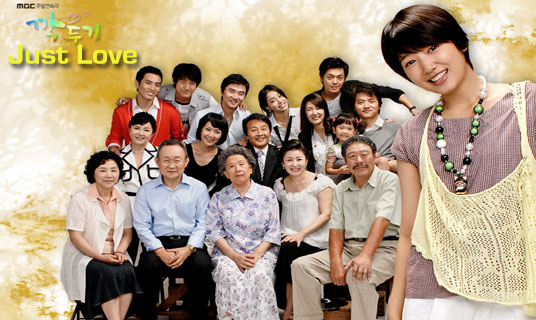 This is a story about broken, splintered families that have become increasingly common in these modern times and portrays a love story that people of all ages can relate to.

There are three main characters in the drama who are tied together through their past and present relationships. Jung Dong-jin (actor Kim Seung-soo), the leading male character, is a network director and a single dad who has a daughter named Da-som. He develops a close relationship with 'Yoo Eun-ho (actress Yoo Ho-jung), a widow who works as a scriptwriter for a radio program. But when his ex-wife, Seo Ji-hae (actress Kim Bo-gyeong), a TV host, appears in his life again after she returns from her studies abroad, the three people get involved in an awkward relationship. The families of all three people also know each other. Then Jang Sa-ya (actress Park Shin-hye) enters the picture and the situation gets more complicated...

The way that families love each other change over the times but family bonds always remain the same. This drama tells a warmhearted story about splintered families in these modern times.

And love is always the common theme in dramas. Most people from the older generation regard youth as being too reckless in love while youth consider elderly people to be too conservative in their relationships. But the love among couples is only different in its appearance as it belies a common emotion. Couples get into fights but the reason they are fighting is usually because they care about each other in ways that foster misunderstandings. This drama will try to weave together a story that people of all generations can empathize with.

As life expectancy rises among the population and more people spend their years in retirement, it is paramount that people prepare a nest egg before the reach old age. What do parents need to change about themselves as they look ahead to a long retirement? Family dynamics change and adjustments need to be made in the structure of a family. These are some of the elements that will be portrayed in this drama.

Even though times change and our relationships with our family changes, our affection for them is timeless. The drama is about affection that is the foundation of family. Dong Jin is the eldest son in a family of 3 sons. He is dutiful and responsible but due to character clash, he has gone through divorce with his ex-wife, Ji Hye, whom he shares a child with. Dong Jin then starts a new romance with Eun Ho whom he works with.

Whoever calls Dong-jin a bad person is probably a bad person himself because there is no one as nice and gentle as him. He is a dutiful son who never caused any problems at home and since he is so perfect, his younger brother and troublemaker Dong-shik finds it hard to ever be like him. He has a high-paying, stable job at the network and he never disobeys his parents. He is satisfied with what he has achieved in life and making his parents proud of him.

But there is one minor problem in Dong-jin's life and that is the fact that he got divorced. He fell in love with Ji-hae, a young prospective anchorwoman who had an irresistible smile. Ji-hae was also attracted to the handsome Dong-jin, who successful and well-mannered. They became passionate lovers and Ji-hae became pregnant. It wasn't a planned pregnancy but they rushed to get married because of it. She had a child at a relatively young age when she still wanted to get ahead in her career. Her decision to study abroad was rejected by her in-laws and so she decided that the only way to get her career back on track was to file for a divorce. Dong-jin could understand why Ji-hae was anxious about her career but on the other hand he disapproved of her decision to leave the marriage and abandon their young daughter. So when he was served the divorce papers, he signed them with a ferocity that even he himself had never known he had. He was determined to raise Ha-som into a bright girl. But he realizes that he cannot fill in the role as a mother to Ha-som ...

With her pretty looks and calm demeanor, she is the perfect daughter-in-law. She goes beyond her duty to do all the household chores around the house. As a well-organized and competent person at work, it is hard to imagine that anyone would find fault with her. Even when she has a heavy workload at work, she will always take the time to do the household chores. She is considerate and dotes on her sister-in-law. She is a wonderful daughter-in-law but her in-laws lament the early death of their son, leaving their daughter-in-law bereft. She was raised by her grandmother after both her parents died in a plane crash. When her grandmother also died, she was left alone, longing for a family. Even though she lives with her in-laws after the death of her husband, she looks up to her mother-in-law like her own mother. Sometimes, she even momentarily forgets she’s the daughter-in-law because of her close relationship with her mother-in-law.

She is a determined woman who wants to be successful in her career. She wasn't a sassy woman with an attitude at the time she married Dong-jin but after studying abroad in America for several years, her bright, sunny disposition changed into a constant display of arrogance and snobbishness. She went to study abroad on a company-funded scholarship but when she returned, she began showing flair in acting. In person, she is a sassy woman but on camera, she is the most endearing and charming TV personality to ever grace the small screen. As her popularity soars, no one comes close in matching her presence on TV. Even though she is difficult to work with and has an attitude, every producer of a TV variety program is eager to cast her as the host of their show. This fuels her ego even more to new heights. But even though she seems to be a heartless person, she has a soft spot for Dong-jin. She hardly regarded Dong-jin as a clumsy guy but he seems to be vulnerable to her now. It seems that he's getting old like the rest of us... He always wore neat suits without one stray thread but now he goes around wearing a dress shirt with a button missing. And he gets stains on the bottom of his pants... Whenever Ji-hae tries to reenter Dong-jin's life, Eun-ho will appear and stitch a button to fix Dong-jin's missing shirt button. Eun-ho will even clean off the stains on Dong-jin's pants. How could she? What's it to her? He's not her man... Oh, but Dong-jin is not her man either. But it's unbearable to watch another woman do such things for Dong-jin.

Nobody remembers the day she began living at a Buddhist temple. According to the monks, someone had left her in front of the Buddhist temple wrapped in a baby's quilt and when the cries of the baby rung through the temple grounds, the head monk uttered, "Is that the cry of some Jangsaya (street peddler)?" And so she was given the name Jang Sa-ya. She is full of curiosity and has an unpredictable personality. Since she was a kid, she constantly got scrapes and bruises on her knees and elbows. When Buddhist followers took off their shoes to enter the temple to pray, she'd hide behind them and then mix up their shoes for fun.

When people brought flashy gadgets, she'd play with them the head monk would scold her for showing an interest in material things. Sa-ya's curiosity is insatiable even in her teens. She'd put on the high heels that some young Buddhist follower might wear to the temple and then trip over herself. She once found a lipstick gloss that someone had dropped and she spent all night putting it on. She eventually woke up late the next morning and the head monk’s face turned aghast when she saw Sa-ya's glossy. Sa-ya is full of innocent mischief and she always leaves behind a mess wherever she goes. But as she grows older, she becomes infatuated with life outside the temple. She dislikes the notion of living the life of a monk for the rest of her life. So when she finally ran away for the ninth time from temple, the head monk allows Sa-ya to go live in the mundane world.