Jumong - Prince of the Legend 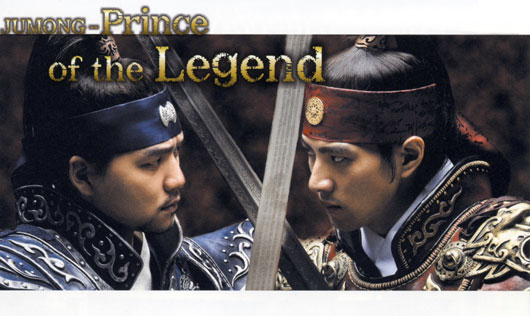 For MBC Wallpaper from this drama : http://imbc.com/broad/tv/drama/jumong/wallpaper/index./html

For MBC Photo Gallery from this drama : http://www.imbc.com/broad/tv/drama/jumong/photogallery/index.html
Synopsis


"Magnitude is about to start". You are about to go back to the time of Goguryeo, a time which was bigger than now. "A time when our nation was the most beautiful", "A time when our nation was the center of the world". "Have you ever met such a time"? "Dare to journey into a time no one has ever gone back to"? The most surprising time in history has come back 2000 years later, a time when the nation made China fall down to their knees and when we fought other nations without any fear.Meet a hero bigger than the myth.Alexander, Genghis Khan, we have the hero who overwhelmed his generation and changed history, Jumong! Up to now we have been used to dramas dealing with the history of kings and knights but now we are about to challenge in creating a drama with the birth of a true hero. A name only remembered as a myth. Get ready to meet Jumong, the hero who opened up the skies of the Old Joseon, which was once ours, by fighting thousands and thousands of armies. Meet the love even bigger than the history. "Love" seems to be the one common denominator across people of all generations and nations. "Love" gets swept away with the waves of time and also gets hurt with biased views in societies, but it also creates a new kind of history by wrestling against adversity and the trials of time. True love, which is uncommonly seen in history, is re-drawn through the drama of our once forgotten history. Through the wisdom and courage of Korea's first queen So Seo-no...

Jumong: King of Goguryeo who won back the skies of the Old Joseon (Actor: Song Il-gook)

Old Joseon (Actor: Song Il-gook) He is the son of Hae Mo-soo and Yu Hwa but grows up as the son of Geum Wa, a person who betrayed his father. He lives longing for the chance to meet his father, who is his teacher, again but he dies and lives the rest of his life not knowing that his teacher was his father. He loves a woman but ends up marrying a different one and eventually breaks up with her, but all these trials and sadness do not get in the way of his destiny. His legacy to the Korean people is the great historical triumph of winning back the skies of the Old Joseon and establishing the Goguryeo Dynasty.

So Seo-no: A wise and strong queen (Actress: Han Hye-jin)

She had the intelligence and foresight to look out for the future generations but because she was a woman she could not live her dreams. She was not afraid of death but because she was from a weak nation, she had to bear a pain more painful than death. Although she couldn't become the love of a lifetime to a certain man, she stands up to be a most powerful and wise leader. The first queen history remembers, in a time when love was lavished, yet not considered everything.

As a child he lost all his father's love to Jumong. As an adult he bears a scar from not being able to be with the woman he loved. He brings Jumong's father to his death and also does everything he can do to take Soo Seo-no away from him.

Cought in a war with the Han Nation alongside of Hae Mo-soo; the two shared a friendship even thicker than blood but eventually surrender to the Han nation after which he betrays Hae Mo-soo.He takes in Hae Mo-soo's wife, a woman who lives every day longing for Hae Mo-soo, as his own wife and also takes care of Hae Mo-soo's son as his son with both love and hatred and a very heavy sense of guilt.

The daughter of Ha Baek-joek, she has looks so stunning that anyone would fall in love with her at first sight. She nurses Hae Mo-soo's wounds with great devotion but ends up facing a tragedy when her people get murdered by the Han army for hiding Hae Mo-soo. After hearing that Hae Mo-soo has passed away she falls into great sadness, but gets married to Geum Wa and gives birth to Hae Mo-soo's son Jumong.