Jewel in the Palace (Daejangguem) 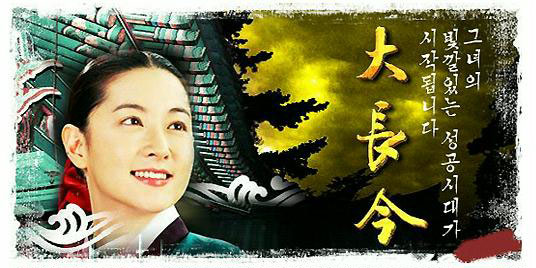 Jang-geum (played by Lee Young-ae) is the daughter of Seo Cheon-su (played by ParkChan-hwan), a former judicial officer-turned butcher (the lowest social class) who lives in hiding after being expelled from the royal palace, and Madame Park (played by Kim Hye-seon), a former court lady working in the royal kitchen who narrowly escaped death following a murderous conspiracy planned by Court Lady Choi.

As a young child, Jang-geum loses both parents and enters the royal palace in the kitchen. In the royal kitchen, she spends a harsh childhood in continuous competition with Choi Geum-yeong (played by Hong Li-na). Under the protection and tutelage of Court Lady Han, Jang-geum makes every effort to become the best cook in the palace. Her endeavors enable her to become a recognized cook; but Lady Choi and her faction, jealous of the success of Lady Han and Jang-geum, plot a conspiracy, which leads to the death of Lady Han and Jang-geums expulsion from the royal palace. Jang-geum is relegated to the position of maidservant for the local government office on Jeju-do Island.

While in exile, Jang-geum learns medicine. Through native intelligence and patient efforts, she earns her reputation as a woman doctor on the island. After a time, she returns to the palace, where she is recognized by the king and becomes the royal physician and also the first female physician in history to serve the king. The king falls in love with her, but she cannot return his love, as she is already in love with Min Jung-Ho, who has stood by her side during the most difficult times. * The concluding part omitted. Photo Gallery : http://www.imbc.com/broad/tv/drama/daejanggum/photo/index.html Reviews

The TV miniseries Daejanggeum, or Jewel in the Palace,set many new records. The miniseries, whose viewer rate averaged 47%, and even reached a high of 57.8%, is based on the story of a real historical figure (Jang-geum) who was the first and only woman to serve as head physician to the King in the rigidly hierarchical and male-dominated social structure of the Joseon Dynasty.

Daejanggeum, in English, "the Great Jang-geum," caught the attention of Korean TV viewers with its unique combination of two themes: the successful rise of a female, which is rarely covered in historical genre, and the elements of traditional food and medicine. For three months, beginning in May 2004, Daejanggeum aired in Taiwan, overtaking other Taiwanese miniseries, and snatching the title of most viewed program of the season. In fact, nowadays, visiting Taiwanese fans flock to the main filming locations on Jeju-do Island, the Korean Folk Village, Naganeupseong, Suwon Hwaseong Haenggung Palace, and Changdeokgung Palace.

Jewel in the Palace trailer