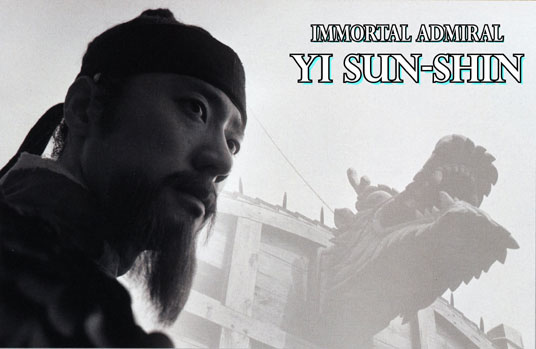 1) Fixed ideas about a national hero are brought up for a scrutiny.

No hero has ever been sent by heaven. He has emerged as one ultimately after undergoing a lifelong process. Drama "Yi Sun-shin" is designed to challenge the fixed ideas about him who has been remembered in the form of an imposing statue standing at the Gwanghwamun intersection in Seoul and the Hyeonchungsa Shrine in South Chungcheong Province, while shedding a new light upon him as a human being.

At the time when Yi Sun-shin lived, the Joseon Dynasty had to achieve political reforms and stabilize the livelihood of the people, while defending the country against the Yojin (Nu Zhen) Tribe and Japanese pirate raiders. Yi Sun-shin was regarded sometimes with jealousy in the process of protecting grass-roots people and sticking to the principles of reforms and lost some battles. He was removed from his duties three times and reinstated to the military service two times as a rank-and-filer. But for all this disgrace, Yi Sun-shin was reborn as a true hero who led the Joseon Navy to a myth of invincibility during the Hideyoshi Invasion (1592-1598 A.D.). Yi Sun-shin, as a soldier who struggled to protect grass-roots people, is what Drama "Yi Sun-shin" has planned to depict.

Drama "Yi Sun-shin" is not a biography of Admiral Yi Sun-shin, nor does it intend to reconstruct a part of the Joseon Dynasty that existed in the 16th century. It will merely look into many human beings, including Yi Sun-shin, who underwent an extreme situation called the Hideyoshi Invasion, in efforts to study all kinds of human nature, from the most noble down to the most crude...

While dramatizing a war in which human beings turn into inhuman wretches in an extreme way, we hope that this drama will serve paradoxically as an opportunity to remind people of the importance of peace.

4) We are not going to depict characters based on a dichotomous criterion.

We will cast a new light on another military leader, Won Gyun, whose evaluation has been severely distorted in the process of making a hero of Admiral Yi Sun-shin, and maintain an objective view of the military leaders of Japan and the Chinese Ming Dynasty as well. While based on a historical fact on the national hero of Japan, Hideyoshi Toyotomi, we are going to find out how his distorted ambition had led many people to be killed in the war and laid a stumbling block to the peace in East Asia. We will remain neutral in our evaluations of Ming generals, such as Chen Lin and Li Rusong.

5) We have made an attempt to shed a new light on numerous officers and soldiers under Yi Sun-shin's command by looking into the admiral not as a hero, but as a true leader.

Yi Sun-shin had a staff of many talented officers under his command. Some of them include Kwon Jun, a strategist, Na Dae-yong, a scientist, and many nameless people who assisted Na in building the turtle ships and making armory. Besides, many other officers, including Chung Un, fought in the war, setting their own life at naught. The drama will describe Yi Sun-shin, a man of virtues, as the leader of these men.

6) In part, the drama will shed light on the life of the villagers at "Gonyang Pottery" in a bid to emphasize the superiority of the culture of the Joseon Dynasty.

The Japanese were so enthusiastic about the Joseon culture that the Hideyoshi Invasion was called a war of porcelain bowls. Many Joseon potters were taken as prisoners of war to Japan, where they produced china and porcelain that later formed the basis of the economic power of the shogunate government of Ieyasu Tokugawa in Edo, Japan. The drama is going to lay stress on the superiority of the Joseon culture by depicting the life and conflicts of potters at the Gonyang Pottery Village.

7) We are going to make a detailed description of the life of grass-roots people, who underwent a war, in efforts to reiterate that such people are the true heroes of history.

In such turbulent days, the king, senior government officials or military leaders were not the only ones that were concerned about the future of their country. There were merchants, who did not hesitate to donate their purses to the national defense despite the cold treatment they received in society based on social status; numerous army volunteers and their leaders, who tried to save their country with their own life; and monk soldiers and their leaders, who rose in arms in the belief that real redemption would come from saving the country. While depicting their resolute stance, we are going to reaffirm the stark fact that "grass-roots people are the real heroes of history."

8) We will try to shed light on the history from an objective point of view, while also taking a look at the background of a historical view that was instigated by the Japanese colonial government.

Some historians, including Lee Gwang-su, who have been advocates of such a distorted historical view, have tried to attribute the outbreak of the war and the subsequent defeat to the government officials' preoccupation in political strifes. But this view is obviously a misjudgment. Political contests are not a prelude to the national ruin. The Joseon society, which was an absolute monarchy, was not ready yet to receive such a political system.

9) This drama will draw a real picture of the Joseon society, which was not well acquainted with the international situation at the time, in a bid to learn a lesson from this example.

In East Asia at the time, Ming was losing his influence gradually, while Yojin was emerging as the central power in Manchuria. In Japan, Nobunaga Oda died after putting an end to a 120-year civil war, and Hideyoshi Toyotomi took power and unified the entire Japan. During the civil war, Japan accepted the Western civilization and came in contact with quite a new weapon, harquebuses. Records have it that the military capabilities of Japan at the time were stronger than those of the European countries combined. Japan had the high ambition to conquer East Asia based on such military capabilities. Regrettably, there were not many people in Joseon who had a correct understanding of the international situation.

The drama will point out, first of all, these points as the primary causes of the 7-year Joseon-Japanese War and the ensuing bitter defeat. We are going to look into the life of Yi Sun-shin, Yu Seong-ryong and Won Gyun who went through such turbulent days as contemporaries. From this history, we are going to learn a lesson for today's Korea, a small and weak nation in the dynamics of the international relations.

Kim Myung-min acting as Lee Sun-shin (1545-1598 A.D./ages 7-54)Yi Sun-shin has a pen name, Yohae. He is a man with a scholarly look and delicate sentiments. He has traveled around the country from his late teens and mid-20s, during which he associates with street knights and chivalrous men. He fights against Japanese pirate raiders on the southern coast and sometimes punishes corrupt local government officials in his own way. But he is driven to despair because he knows he cannot change the world alone.

Right after entering the government service, he loses a battle at the Nokdundo Islet, which leaves people skeptical of his qualifications as a military officer. And, his upright attitude has, on the contrary, become the target for criticism. While overcoming all difficulties, he saves the country by winning all of the 23 naval battles during the Hideyoshi Invasion and emerges eventually as Joseon's most resourceful military leader.

Lee Jae-ryong as Yu Seong-ryong (1542-1607 A.D./ages 10-50s)Yu Seong-ryong's pen name is Seoae and his nom de guerre is Igyon. He is so bright that he perceives the Confucian philosophy at the age of eight. He is a great scholar, who has inherited the academic tradition of Yi Hwang (pen name: Toegye, 1501-1570 A.D.) and a competent prime minister, who manages the administration of state affairs wisely during the war. Yu Seonog-ryong also spends his childhood days with Yi Sun-shin in the same village. Yu has since remained Admiral Yi's life-long supporter and friend.

Cho Min-gi as King Seonjo (1552-1608 A.D./ages 16-40s)Since he was enthroned, he has remained an advocate of a reform-minded civil administration. Respecting Yi Hwang as his teacher, the king turns out to be so reform-oriented that he does not hesitate to appoint scholars, who have lain low during the previous administrations under Kings Jungjong, Injong and Myongjong, to government posts. He, however, gives higher priorities to building a solid monarchy over taking care of the livelihood of the people. But his reformative principles lose momentum gradually in the process of fixing the political strifes and undergoing the war. The king suffers greatly as an unfortunate monarch, because he has to flee from the capital city for Pyongyang first and then Uiju during the war. When Yi Sun-shin governs Jeolla region well and gains the support of the people, the king has remained seized even with fear that his throne might be threatened. He is, therefore, on endless guard against Yi Sun-shin.

Choi Jae-seong as Won Gyun (1540-1597 A.D./ages 12-58)Won Gyun's pen name is Pyongjung. He is a foolhardy man of straight talk. He exhibited herculean strength in the battles against the Yojin Tribe. As the magistrate in Jongseong, he was praised as the guardian of the six fortresses. Winning the confidence of then top military leaders, Shin Lip and Lee Il, Won Gyun makes a brilliant progress as a military officer.

Won spends his childhood days together with Yi Sun-shin and remains a life-long rival of Yi's as well. After the outbreak of the war, he has remained confronted with Yi. But Won knows Yi Sun-shin better than anyone else. Yi is the most resourceful military leader, while Won is the bravest soldier.