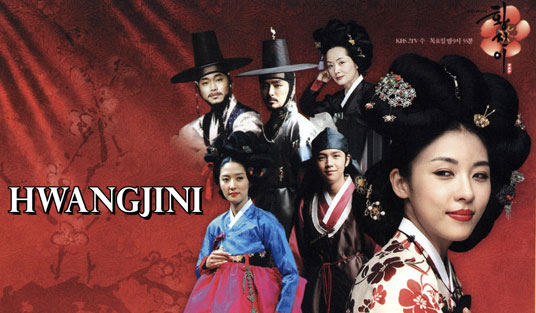 For KBS Wallpaper from this drama : http://www.kbs.co.kr/drama/hwangjiny/report/paper/index.html

For KBS Photo Gallery from this drama : http://www.kbs.co.kr/drama/hwangjiny/report/photo/index.html

This story sheds new light on the life of Joseon-era dancer, musician and poet Hwangjini, who made her art blossom even when her love was put to test. The series also depicts the tragic life of a woman who faces hardships due to her social status. The drama drew the spotlight even before its premiere because Hwangjini is portrayed by top actress Ha Ji-won. Meanwhile, Wang Bit-na portrays another prominent dancer of the same era who is jealous of Hwangjini’s artistic talent. The role of nobleman Kim Eun-ho, Hwangjini’s first love who dies because their love turns out unrealistic due to differences in their social status, is played by Chang Keun-seok, while king’s relative Byuk Kye-soo, who becomes addicted to Hwangjini but fails to win her heart, is played by Yoo Tae-jun. Actor Lee Shi-hwan portrays Yi Saeng, an ambivalent character who is neither Hwangjini’s lover nor friend. Kim Young-ae plays the role of dancing girls’ trainer, while Kim Bo-yeon portrays her rival, Mae-hyang. The role of dancer Heon-keum, Hwangjini’s mother who gave birth to her as a result of her belief that love only comes once in a lifetime, is portrayed by Chun Mi-seon.

Hwangjini: The best artist of the Joseon era, Hwangjini is a talented dancer, musician and poet. She was born to a nobleman and a court dancer, and is destined to live as a dancer. Despite her inborn talent, she works hard to hone her skills. She falls in love with a nobleman but her first love ends up tragically due to differences in their social status, and eventually the man she loves dies. She matures as a person when she meets king’s relative Byuk Kye-soo, Kim Jung-han and Yi-saeng. Her art blossoms even when she faces hardships brought by her tragic love.

Bu-yong: A daughter of ordinary people, Bu-yong became a court dancer and ever since has devoted herself solely to dancing. She is jealous of Hwangjini because she recognizes her talent but she is not a genius. She agonizes over her inferiority to Hwangjini but stops hating her seeing how hard she works and what deep wounds she has in her heart.

Yim Baek-moo: The chief dancer of the Joseon court, Baek-moo trains young dancers and has a stubborn personality. She takes pride in dancing and uses harsh training methods. But deep inside, she is torn by sadness.

Byuk Kye-soo: A king’s relative, Kye-soo gives up entering government service for fear of being trapped in conspiracy, and lives an idyllic life. He falls in love with Hwangjini, but she doesn’t love him back, and neither money nor power can buy her feelings. He agonizes when Hwangjini turns him down and resorts to all kinds of cowardly means to win her heart.