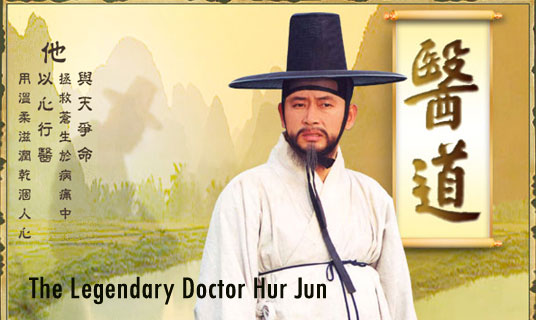 Hur Jun, also known as "The Way of Medicine: The Epic Doctor Hur Jun" in Taiwan, and "The Way of Medicine" in Hong Kong) is a 2000 TV Biographical Drama broadcast by the South Korean TV channel MBC. It was aired by Taiwan Television in 2002 and Hong Kong's TVB in 2005, after the finale of Dae Jang Geum. Because of the similarities between the two main characters of the show, Hur Jun has often been called the male version of Dae Jang Geum. Also worth noting is that the original title of the show were never used outside of South Korea. In Taiwan, the title was re-worked to become"The Way of Medicine: The Epic Doctor Hur Jun". The first half of the title stuck, and was used by TVB when it aired Hur Jun in 2005.

The story is set in Joseon Korea, primarily during the reign of Seonjo. The story covers a time that is approximately 50 years after the death of Dae Jang Geum (the reputed first female doctor of Joseon Korea).

Hur Jun is the son of a sangnom (Korea's version of Untouchable) mother. Due to his mother's social position he was also considered sangnom under Joseon law at the time, even though his father was from the ruling caste and held office as a local magistrate. As a result, he suffered many discriminatory treatments, causing him to lose focus and direction, and eventually led him to participate in smuggling operations. At this time, Hur Jun got to know an upper-class lady who was in exile. The lady's father was branded a traitor and died during exile. Hur Jun sympathized with the lady and handled all of her father's funeral affairs. Not long after that, Hur Jun's smuggling activities were discovered, and he was only saved from death by his erstwhile uncaring father, who rescued Hur Jun, his mother, and the lady in exile and sneaked them out of their town. Hur Jun and the lady in exile eventually got married and went to Gyeongsang Province to live a peaceful life.

One time, Hur Jun's mother fell ill, and Hur Jun sought help with a famous local physician, Yoo I-Tae (Liu Yi-Tai). It was during this time that Hur Jun became interested in medicine and became his pupil to study medicine. His intelligent nature began to manifest itself, and coupled with his industrious nature, he progressed very quickly. His intelligence attracted the attention of an orphaned lady who lived with Hur Jun's mentor. She began to mentor Hur Jun in the area of medicinal usage. Hur Jun's medicinal prowess continued to progress, but he still had no chance to practice. His first patient came when an elderly couple brought their unconscious daughter to his house. Apparently, she tried to hang herself and almost succeeded in committing suicide. Hur Jun, with some innovative remedies, managed to revive her, but refused to accept payment for his help. The grateful couple could only express their gratitude by spreading their benefactor's deeds to their friends and neighbors. This unwittingly brought a huge following of poor patients for Hur Jun, especially when they learned that he was a skilled physician who did not even expect payment for his services.

His mentor was initially angry when he thought Hur Jun had not acquired sufficient medical knowledge to treat patients in the first place and was only making use of his own name to earn some quick money. Nonetheless, his mentor investigated Hur Jun's diagnosis and prescriptions for each of the poor patients he treated and he realized Hur Jun was indeed skilled and correct in his treatment. He was further pleased that Hur Jun was an upright and honest man who had not profited at all from the poor patients. To reward Hur Jun, the mentor promoted him to be in charge of the drugs store.

Later, by sheer luck, Hur Jun had an opportunity to treat the wife of a high-ranking and equally haughty gentry. She had suffered a stroke and as a result, became paralyzed and bedridden. All of the physicians who had seen her, had all deduced her condition as hopeless. Against all odds, a determined Hur Jun managed to cure her completely. This, obviously, earned the respect of the gentry, who wrote a letter of recommendation for Hur Jun to join the Imperial Hospital. However, this also aroused jealousy of Hur Jun's mentor, who expelled Hur Jun from his mentorship.

In the midst of all this, two other doctors began to mentor Hur Jun, and eventually, Hur Jun decided to join the medical examination in Hanyang (Modern Day Seoul). When Hur Jun arrived in Hanyang, he failed to join the examination because he decided to treat a critically-ill patient. This earned him a huge popularity, and also the re-acceptance of his original mentor. Conversely, the mentor's own son, Yoo Do-Ji (Liu Dao-Zhi), who had refused to treat the patient, came in first in the examination. The mentor rebuked his son's lack of compassion for patients and his ambitious demeanor to use his medical skills to advance his political aspirations. The son was unrepentant and the mentor subsequently disowned him.

Sadly, not long after that, Hur Jun's original mentor became terminally ill with stomach cancer. Knowing his end was near, he committed suicide and instructed Hur Jun to dissect his body so that he could have a better understanding of how the human body works. This greatly advanced Hur Jun's medical knowledge and made him even more committed to medicine and in an examination, he was easily placed first and was granted entry into the Imperial Hospital. In the Imperial Hospital, Hur Jun met his mentor's son, Do-Ji, who had been diligently and unscrupulously moving up the ranks at the Imperial Hospital. Hur Jun also saw the Chief Imperial Doctor, Yeong, who participated in an acupuncture competition with Hur Jun's mentor 20 years ago and lost. Knowing the connection between Hur Jun and the victor of that competition, the Imperial Doctor placed Hur Jun in an unimportant department in the Hospital. During this time, Hur Jun's career was restricted by the Imperial Doctor in every way possible. This all ended when the Emperor's favorite concubine's brother suffered from stomach cancer. The doctors in the Hospital exhausted all treatments to treat the patient, but to no avail. It was because of this that Hur Jun competed with Yeong in treating the patient. The competition resulted in a huge victory for Hur Jun, who managed to treat the patient within 5 days. This also ended the restrictions imposed by Yeong, who finally admitted defeat and that Hur Jun (and his late mentor's) medical skills were superior.

During the 22nd year of Seonjo's reign, a national epidemic occurred. It was this time that Hur Jun was forced to face his past when the arresting officer then was transferred to the palace. Hur Jun, though troubled, went ahead to the epidemic areas to research for a cure, which he successfully found. Upon his return, Hur Jun surrendered himself to the arresting officer and was punished to be banished. Just when he was preparing to go, the Emperor's concubine, Gong-Pin fell critically ill with heart problems and all the Imperial Doctors had no clue on how to cure her. In desperation, the Emperor recalled Hur Jun, who once again saved another member of the royal family. To reward Hur Jun, the Emperor absolved Hur Jun of all crimes and wrongdoings, and assigned him to be the personal physician for Gong-Pin. However, the Emperor started to shower his attention to another concubine, and heartbroken Gong-Pin's condition deteriorated. Upon her death, Hur Jun decided to tour the country for herbs and other uncured illnesses, going away for several years. On his return, he hid in the imperial medical library to research and refine his skills.

In the meantime, Do-Ji was steadily moving up the ranks in the Imperial Hospital, and was all set to take over the post of Chief Imperial Doctor. However, a prince he was in charge of developed a strange and serious illness. Not wishing to admit his mistake, which could cost his promotion, Do-Ji decided to assign the prince to Hur Jun and let him be his scapegoat. However, Hur Jun against all odds, was able to cure the prince. Much to the shock of Do-Ji, the grateful Emperor promoted Hur Jun to 3rd grade officer and Chief Imperial Doctor.

A war soon broke out; the Japanese invaded Joseon. Hur Jun was credited for saving the entire medical annals when the imperial court went into exile, and reorganizing the Imperial Medical Annals after the war was over, received massive praise from Seonjo, who promoted him to a first grade officer. A few years later, Hur Jun even recommended to Seonjo to make the entire Imperial Medical Annals available to the public, in an effort to make sure that all Joseon Korea citizens can prevent illnesses before they happen. The good times did not last long, however. An imperial battle between Prince Yeongchang and Prince Gwanghaegun began, and at first, Hur Jun refused to participate, reasoning that doctors should treat patients only, and not get involved in politics. The imperial battle was eventually won by Gwanghaegun, who ascended to the throne after Seonjo's death in 1608. Once installed as emperor, Gwanghaegun immediately branded Hur Jun a traitor, and sentenced him to exile in the Southern part of the country.

In the South, Hur Jun, with the help of imperial doctors who smuggle medical books to him, published a medical handbook that is considered as a classic among Oriental Medicine Literatures in the year 1610. In 1611, Gwanghaegun issued an imperial pardon to Hur Jun, and ordered him back to the palace. This time, Hur Jun refused, and returned to his hometown to treat patients. At this time, a national plague epidemic began, and Hur Jun was called back to the Imperial Hospital to research for cures. The research bore successful fruit, but exhausted Hur Jun, who unknowingly contracted the plague himself. Eventually, Hur Jun died in 1615, amid national mourning.