Hometown over the hill 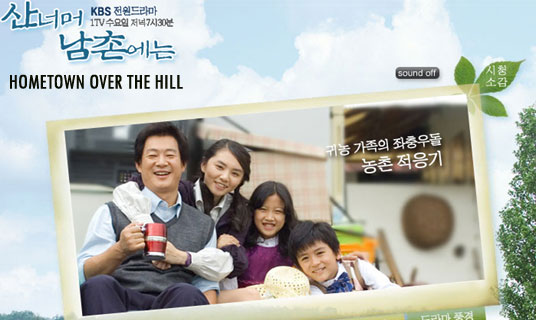 Dreams and reality of farming villages

By depicting the dreams of people living in farming villages, this drama also reveals problems that today's residents of rural areas face, such as a growing number of biracial children from international marriages and the cutthroat competition to survive.

Scenes showing picturesque rustic landscapes during each season spellbind viewers, as do heartwarming stories about the strong determination of people living in farming villages.

While centering on people who have lived in farming villages for generations, this drama also portrays the lives of people who have moved to farmland from big cities and from abroad.

This divorced man used to work for a securities firm but moved to a village with his adolescent eldest daughter and twins. He tries to learn farming but it turns out a big challenge.

The wife of the head of the main family, who has religiously carried on the bean fermentation tradition of her husband's family. She is strict but has a warm heart.

The eldest grandson of the main family, who works as a director of a post office and helps the elderly in his village, acting as their son and grandson.

The eldest daughter-in-law of the main family, who has harnessed her housekeeping skills through a hard life with her parents-in-law

The youngest daughter of the main family and Chun-bong's daughter-in-law. After her husband's death, she moves to her hometown, where her parents and parents-in-law live.

Seung-ju's father-in-law. A typical country man, who has a cheerful and social personality.

Chun-bong's farm-savvy eldest son, who has amassed a fortune by managing an orchard and is married to a Vietnamese woman

Sun-ho's wife from Vietnam. She is younger than Seung-ju but is higher in family rank than her. She does her best to learn housekeeping but sometimes she can be sly and jealous as well.