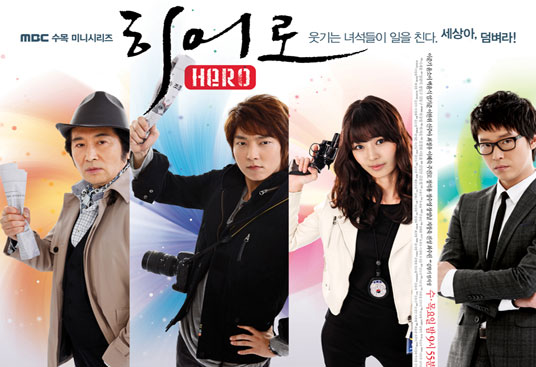 Jin Do Hyuk(Lee Jun Ki) works as a journalist for a third-rate newspaper. He lost his parents at an early age, after they were involved in a fatal hit and run car accident and Do Hyuk was left alone with his older sister Do Hee (Jang Young Nam). Although Do Hee is older than Do Hyuk she is quite immature, impulsive and whenever Do Hyuk had money she would take his money.

He had always dreamed of becoming a journalist like his father, attending the prestigious Dae Sae Ilbo, but because of his poor financial situation Do Hyuk was unable to attend college, which created a temporary roadblock for him. So instead Do Hyuk ends up working for the third rate news rag "Monday Seoul". Although the "Monday Seoul" is lower than the "Dae Sae Ilbo," Do Hyuk works with passion and uses any means necessary to cover a story. Joo Jae In (Yoon So Yi) lost her father at an early age. Her father, a police officer, died while on duty.

Since then, she has wanted to follow in her father's footsteps to become a police officer. Jae In eventually graduated at the top of her class in the police academy. She likes Kang Hae Sung (Um Ki Joon), who interviewed her for the "Dae Sae Ilbo." Jae In was also interviewed by Do Hyuk for the "Monday Seoul," but she doesn't know what to make of Do Hyuk. Kang Hae Sung, a highly respected Dae Sae Ilbo journalist, currently dates Choi Ho Kyung (Shin Ju Ah), the daughter of Choi Il Doo (Choi Jyung Woo), the president of parent company Dae Sae Corporation. Choi Il Doo views Ho Kyung somewhat like his right hand man. Often, Ho Kyung will spin news stories to favor Il Doo and the Dae Sae Corporation. Il Doo hopes Hae Syung will one day become his son-in-law. But, Hae Syung notices Jae In and Do Hyuk becoming closer and becomes jealous. One day, Do Hyuk awaits outside of a prison to interview former mobster Jo Yong Deok, a leader of the Twin Ax gang prior to his 15 year jail sentence. On the day of his release the only persons awaiting for him are journalist Do Hyuk and a former underling. Yong Deok then deides to start his own newspaper with Do Hyuk named the "Yong Deok Ilbo".

Jin Do Hyuk, a newspaper reporter who is full of ambition.

Jin wants to become a reporter like his father, but he comes from a family which struggles from the rigors of life and he was not able to study of his own will due to his immature sister who financially worsens the situation. Jin barely gets into a third-rate newspaper but runs into a wall when the paper decides to cease publication. However, he grows with new dreams and expectations, when his interviewee, a former gang boss, proposes that they set up a new newspaper. Jin's optimism and aggressiveness could be taken as someone who is fun compared to Lee's previous roles where he was an undercover agent for the intelligence service or had to be a real hero carrying a heavy burden on his shoulders. Lee repeatedly emphasized that Jin is a character who is "less serious and more cheerful" than previous characters he has played. But Lee will not have a completely easy time with his role playing someone who transforms into a reporter with a strong sense of justice and speaks up for the lower middle class society.

Joo Jae In, a leader of a police department's homicide team.

Joo, a detective who graduated police academy with first honors, is a character who always plays by the book. At work, she is alike her father who died while on duty but in normal life, she is like her mother who is feminine and elegant yet a little immature. That is why she will sweep out criminals with various types of martial art fighting, but wears pink pajamas at home or will carefully sneak into a crime scene but turns shy in front of the ones she likes. That is where her appeal is and the reason why she will be confused over liking Jin and Kang. According to producer Kim, Jae In will "always quarrel with Jin who seems to be living a third-rate life, ignoring him and despising him until she gradually realizes his attractiveness and starts to mature."

Um concisely explained that Kang is one who is "full of ambition" and will "use any means possible to achieve his goal". While Kang is cold-hearted and nimble-witted, he is the typical character who gets engaged to the daughter of his newspaper Dae Sae Ilbo's chairman and secures his position as the mainstream reporter in the economic section of the paper. However, as he starts to grow feelings for detective Joo, he cannot stand her getting closer to Jin and agonizes from it.

Jo Yong Deok, a former gang boss who prepares for revenge for the first time in 15 years.

Jo comes out into society after serving 15 years in a prison. He no longer has any followers except for Sang Chul (Jo Kyung Hoon), his wife has remarried with someone else and his daughter, who has become a college student, turns her back on him. He now has no-one to turn to, and ends up proposing that he and Jin, who was after him for an interview, set up a newspaper through which Cho tries to settle his hidden past with newspaper Dae Sae Ilbo. Baek, who always has considerable presence in his films or dramas, whether he protagonist or antagonist, refrained from answering most of the questions about his character and replaced them with his chuckles. "There weren't any difficulties. (chuckles) I just try to make it realistic." Despite his short responses, we can expect Baek, the master who has been accumulating on his experience over the years, to fulfill his role well.

Jin Do Hee, Do hyuks elder sister, the mother of Jin Sol and Jin Jeong.

Myung Hee, the mother of Jae In and also the owner of Tesoro Coffeehouse. Myung Hee is an adorable mother with elegance and sensitivity, but a little naive. She raised Jae In alone ever sinceher husband died on duty.

Gong Chil Sung, the second leader of the Double Axe Gang, used to be the follower of Yong Deok and has been watching him carefully since Deok was released from prison. He is also envious of Hae Syung, who is trusted by Choi Il Do, and continues to guard his second position beside Ii Do.

Choi Il Do is the President of DaeSe Enterprise and owner of DaSe Press. He single handedly developed DaeSe into one of Korea's top enterprise, but he has his eyes set on absolute power.

Park Sang Hun is the photographer for DaeSe Press and is the trusted sidekick of Hae Syung.

Kim Bok Soon is the proud mother of Hae Syung. When she met the glamorous Ho Kyung she became worried because of Kyung's over-privileged personality.

Actress Han Ji Min dropped out from the leading role before filming starts to be replaced by actress Kim Min Jung.

Due to a serious shoulder injury, actress Kim Min Jung was forced to leave the production on 31st October, 12 days before the airing date. and replaced by Yoon So Yi.