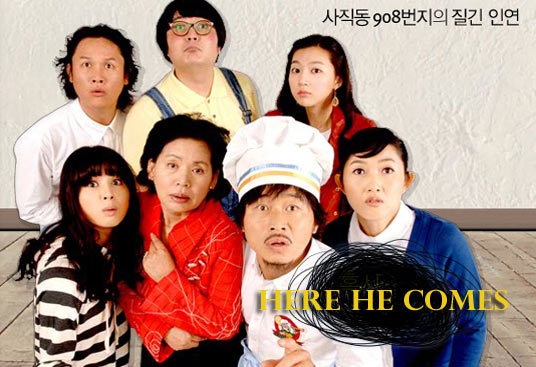 Also known as: That Person Is Coming

Are we really a family? A heartwarming story about a family where the members have strong personalities and hardly resemble each other!

Yoon So-jung is the grandmother in the family who is legally 71 years old but looks like she's 60. She thinks she's still a youthful and attractive woman. He used to be a caring father but one day he turns into a selfish and uncaring dad. Lee Moon-shik suffers from amnesia one day.

Don't even think about tangling with her. She might look cool on the surface but inside she has a nasty personality with a scary temper. Those are the two sides of Jung Gyeong-soon, the mother of the family. Falling from her perch as the queen of the Cannes Film Festival, Lee Young-hee, the aunt in the family, remains optimistic about her career. Lee Jae-sook and Lee Jae-yong are fraternal twins who you couldn't tell were twins at all unless somebody told you. Kang Sung-jin is the "uncle" in the family but he's not really a family member.

Everyone in the family has a tendency of being grouchy at each other but since they're family, they stay loving and caring underneath it all!

Her actual age is 71 but she looks like she's just 60. She's a relatively youthful-looking grandmother! She calls herself a trendsetter. She is infatuated with cosmetics and adores luxury goods. Rumor has it that she has an enormous fortune hidden away but nobody knows where she keeps her money and how wealthy she is! She likes to make wagers to get what she wants from someone else but it never works out as planned. But she never quits in her pursuit of an object that she develops an infatuation for. She seems to be aloof about family matters but it always seems that she's involved in everything that goes on in the family. As a cynic, she doesn't believe in love but one day a fine gentleman enters her life and sweeps her off her two feet...

2 years ago, Moon-shik was a caring dad who ran a pizza parlor where he made excellent oven-baked pizzas! But after disappearing for 2 years, he returns to his family without any memories of his family. With little recollections of his past as a wonderful dad, he acts differently. He is selfish and mean! As an utterly immature adult, he is full of greed. Will he be able to become the dad he used to be and get along with the strong personalities in his family?

For 2 years, she raised her family without her missing husband. She displayed admirable qualities as a strong mother. She will annoy people while always maintaining a smile. She merely tells it as it is but people will be hurt by her comments. On the other hand, she never holds a grudge against people for that long. Sticking to her sense of fairness and principles, she will never intentionally lose when she plays cards with her mother-in-law. Thought her missing husband returned to the family, he is a changed person and not prepared to assume the responsibilities of a father. After losing all his memories, Moon-shik returned home but refers to Gyeong-soon as "Mrs. Lee." Will Gyeong-soon be able to fix her marriage?

She won a best actress award at an international film festival and received a proposal for marriage from the heir of a family fortune. She is on a roll. But indecent pictures of her with her ex-boyfriend surface on the Internet and her career comes to a screeching halt. She is toppled from her perch as the most glamorous movie actress in the country and becomes the most hated actress. After cutting off all contacts with her friends for two years when she stayed home throughout that time, she decides to go to India to seek enlightenment. She achieves this within seven days into her trip and returns to Korea with newfound insight on the workings of life. She dreams of making a big comeback as an actress. With nothing to lose, she leaves her fate to the winds of destiny as she dreams of soaring high again.

She is the fraternal twin of Jae-yong. She was born three minutes sooner than Jae-yong and so she became the "big sister." Her interests in life are men and money. Thats all that matters to her. When she is short on money, she'll cut a deal with her twin brother Jae-yong and shake him down for some cash. With her natural pretty looks, she is popular on campus.

He is the fraternal twin of Jae-sook. But he looks much older than his actual age! As a nerdy student majoring in engineering, he is a master at videogames and knows every animated movie that was released in Japan. He is a cynical guy but has a warm, friendly personality. Though he looks very old, he likes a girl with cute looks and a cutesy demeanor. But he has never dated any girls so far.

He is the only person in the home who is not a family member. He has lived with the family for 20 years and claims that he's also a family member but when it is disadvantageous for him to be a part of the family, he will change his story and say that he's just a stranger. He is slow in catching on to what is happening around him. Personality-wise, he is immature. He constantly pouts when he doesn't get what he wants. Whenever he is crossed he will refuse to eat or tell everyone that he will run away. But overall, he's a likable person in the family. Everyone in the family calls him uncle.