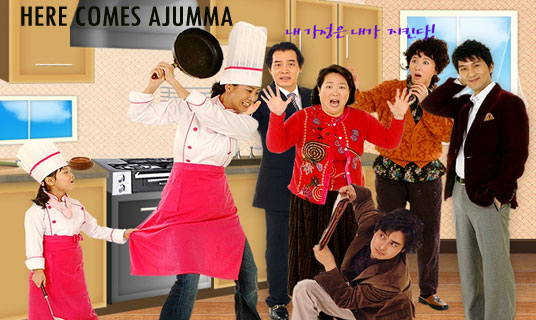 O-nim is a housewife who has sacrificed herself to cater to all her husband and children's needs. When she finds out that her husband is having an affair, she tries to transform herself into a classy lady and manages to parlay her cooking skills into a new career as a TV celebrity chef.

This is a story of an ordinary housewife who is scorned by her husband for being shallow and ignorant but who later transforms into a successful and sophisticated woman. Her transformation from a poor and uneducated woman begins from her determination to get back her husband from another woman. The story is depicted from the standpoint of stay-at-home moms in an enrapturing way, and will undoubtedly offer vicarious satisfaction to all housewives who happen to watch this drama.

Na Oh-nim : Curious and always eager to tell others about her life, this pretty woman is good at fighting, homemaking and everything else except for studying. She works for an eatery at a conventional market where she delivers food by carrying trays on her head, and can make any customer who attempts to run away without paying for food open their wallets. She is willing to do any work to earn money, be it a nightclub cook, a maid or a movie extra. The reason being -- she needs money to buy a used car for her husband and to pay her big family's moving costs when they move to a new place. One day she receives an offer from a man named Shim Woo-chan.

Kim Jae-kwang: Professionally ambitious and sensitive to what others think about him, this man disdains his wife for her garrulousness. She always lets him down by making ignorant remarks and never watches the news or reads newspapers because she says she’s busy making money. The only thing she’s good at is cooking and yelling. He needs a woman who understands him, grows with him hand in hand and acts as a woman. One day he runs into his first love, Hong Yu-ran, and falls in love with her again. He feels guilty to his wife but he doesn't want to spend the remaining 40 years of his life with a woman who doesn't match with him. Just when he expects it the least, he reaps a windfall.

Shim Woo-chan: A fastidious guy with high self-esteem and relentless desire to win. He meets the love of his life, Min Hyo-ju, on a Seine River bridge. Though she lost her parents at a young age, she is the most elegant and staunch woman he has ever met. The two fall in love with each other at first sight, vow to marry each other and begin living together. Despite a strong opposition from his father, they hold an engagement ceremony, albeit in a very simple way. But one day she abandons him, leaving him unable to trust people again. However, choosing Oh-nim turns out to be a very reckless decision.