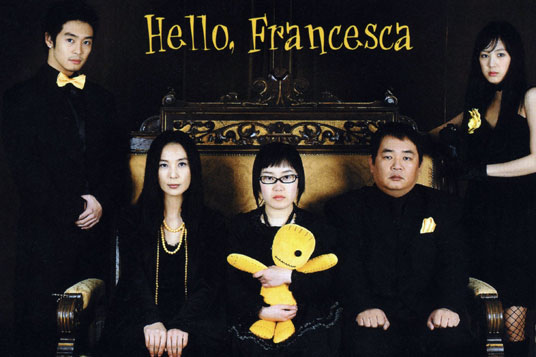 Romania, 2005. One of the last vampire families on earth decides to disguise themselves and live among humans until "the glory of their empire" revives. They are sent to different places all over the world that are considered safe by their leader. However, a group of vampires takes the wrong ship and happens to come to Korea. On board, they run into a timid and unlucky man Doo-il. One of the vampires bites him by mistake and he becomes one of them. They promise Doo-il that they will return him into a human on the day when their leader comes to find them. He doesn't have any other choice but to live with them. They are disguised as a family of five and start new lives in Seoul. Can they really go back to their country safely when their leader comes to find them? While watching the vampires who disguise themselves as a human family, the viewers will witness both their human sides and the human's inhuman sides. Can Seoul be a safe place for them?

No one knows what is going on her mind. She's cynical and heartless. She's a descendant of a prestigious vampire family. As sophisticated as she is, others have a hard time understanding why she bit someone like Doo-il. She reluctantly acts as Doo-il's wife. She doesn't care whether Doo-il hates her or not. She has a long dark hair and casts a cold eye. However, there's something about her that attracts us and it's hard to dislike her.

He's the unluckiest man in the world. On the day when the only woman he ever loved refused him, he runs into Francesca and becomes a vampire. He's a 40 year-old single man who has never had a real girlfriend. He believes that he can be a human again as long as he lives with the vampires until that day. Since he knows about the humans well, he constantly worries about everything. He seems timid and chicken-hearted, but he's actually a very sweet and warm-hearted person.

She's cute and sexy. Even in the vampire world, she is considered a very hot woman. She's very interested in human fashion and culture. She has an eye for fashion. She has to find the perfect man who can become an elite vampire before that day.She's constantly dating, but she??s not attracted to just good-looking men. It seems that there's something more important in humans.

Unlike his perfect appearance, he's extremely simple and rather ignorant. During the worst famine in vampire history, he survived on chicken blood, but it seems that his brain was damaged in the process. Thanks to his handsome appearance, there are always women around him, but it doesn't take long for the women to figure out there's something missing about him.