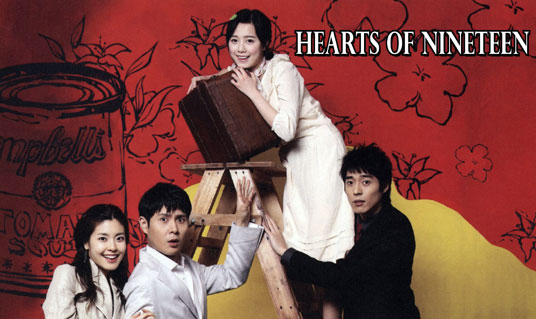 For KBS Photo Gallery from this drama : http://www.kbs.co.kr/drama/soonjung/report/photo/index.html

This drama portrays the life journey of an upbeat and cheerful ethnic Korean girl, Kuk-hwa, from China who comes to Korea to get married and start her own family with her own efforts. By overcoming hardships with a smile and wisdom, she teaches the meaning of innocence in the era when love is determined by too many preconditions. The role of the modest and honest guy Hong Woo-kyung, who works at telecom company UT, is played by Lee Min-woo, while the ill-mannered Yoon-hu, a scion of a conglomerate, is portrayed by Seo Ji-suk. The cast also includes several famous middle-aged actors: Shin Koo, who plays the oldest person in Hong's family, and Kang Nam-kil and Kim Mi-kyung, who play Woo-kyung's parents. Kang Seok-woo appears in a comic role of Shin's second son as a third-class bar singer. Adding to the cheerful atmosphere of the series is Cho Jung-rin, who plays Woo-kyung's younger sister. Han Jin-hee and Yoon Yeo-jung appear as Yoon-hu's family.

Yang Kuk-hwa:An upbeat and cheerful 19-year-old girl from China, Kuk-hwa comes to Korea to marry Woo-kyung's uncle but upon arrival hears the news about her fiance's death in an accident. She does her best to settle down in Korea on her own, and proves to be an optimistic and frank albeit unpredictable person who makes everyone around her smile. She becomes part of Woo-kyung's family and after many twists and turns falls in love with Woo-kyung's friend and manager Yoon-hu and finally starts her own family in Korea.

Hong Woo-kyung:This well-mannered 29-year-old guy always takes good care of his uncle's fiance, Kuk-hwa. He treats everybody with respect and wishes everybody well. Woo-kyung joins a telecom company where his classmate Yoon-hu works as an executive director, and works diligently in the company's planning department. Destiny brings him to Yoon-hu's sassy younger sister Yoon-jung through a car accident, and the two begin their topsy-turvy relationship.

Park Yoon-hu:The son of a telecom company's CEO and a Korean cuisine researcher, this 29-year-old man is Woo-kyung's classmate but holds a higher position in his father's company, which he will inherit someday. Good-looking and well-educated, Yoon-hu however turned into a cold-hearted person after his failed first love. His secretary has a hard time working for him due to his fastidious personality. But Kuk-hwa gradually thaws his frozen heart.

Park Yun-jung:This 23-year-old sassy girl is Yoon-hu’s younger sister. She was never interested in studies and spends her time shopping in luxurious boutiques and driving her imported car. She never loses in fights, but despite her foolishness she is pure-hearted and outgoing. Her mother sets her up with multiple guys to help her find a man who can satisfy her vanity. She believes that marriage is based on preconditions, but her beliefs are shattered when she meets the well-mannered guy Woo-kyung.