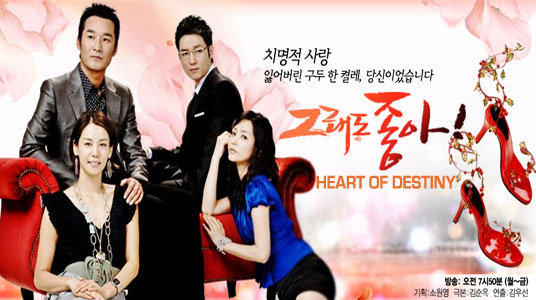 Also known as Even So Love

Lee Hyo Eun is a shoe designer with a very complicated family. Her sister was adopted by her biological father's wife because she was unable to have children of her own. Hyo Eun was left to live through hardships with her mother. Her sister, Seo Myung Ji, lived in the life of luxury and begins to start a relationship with Yoon Seok Bin. Seok Bin is the son of Mr. Yoon, who works for Myung Ji's father. While Hyo Eun develops a love relationship with Seok Bin's half brother, Seok Woo. But Hyo Eun is already dating a dentist, Tae Joo.

A marriage between two passionate people is still ridden with the threat of a failed marriage like a loveless marriage. As two people struggle to save a marriage from careening off course, this story will show how two people build a strong loving family.

The main character is forced into a desperate situation where she chooses a loveless marriage.

It is a decision she cannot undo so she tries her best to make the marriage work but relationships are not easy to solve. She regrets her decision every day of her life and despairs at the unfairness of the institution of marriage that is tilted in the favor of men. However, that does not mean a marriage equates to misery. Marriage is an institution that makes a woman more mature as a person and allows her to reinvent herself.

Even caterpillars must go through a difficult metamorphosis to become a butterfly. There are no completely satisfied partners in a marriage. The path that was not taken will always be considered as a golden opportunity that was foolishly passed up. Thus, people naturally regret the decisions they make in life...

Marriage is a ritual of adulthood. Whatever choice you make, marriage will bring two people together into holy matrimony and challenge them along the way. Thus, this drama not only illustrates the love between a man and a woman but also goes beyond that by depicting a love where both partners find the strength to forgive each other and compromise on issues for the good of the marriage. It will make you realize that sometimes, you need to free yourself of all your desires and clear your head to see the big picture lying before you.

Hyo-eun chooses a loveless marriage but she tries to make the marriage work as best as she can. Born from a lowly status, Myung-ji succeeded beyond her wildest dreams and is bent on conquering love. Jung-hee, Hyo-eun's mother, is satisfied with being close to the man she loves even though she will never be able to become his legal wife. Eun-shim (Myung-ji's mother) believes that a happy life is a marriage that stays intact even under difficult circumstances. Let's follow the glowing firefly to seek happiness by learning the life lessons from these four women.

As Na Jung-hee's eldest daughter, she learned how to be an independent woman since she was a young girl. Although her mother paid more attention to Myung-ji in her childhood, she does not harbor a grudge against anyone. She deeply cares for her mother who works hard to support the family. She has a professional career that she worked hard to build and she's a model to other workingwomen. She make smart life decisions and has a positive outlook on life. She is considerate to other people and has a kind heart. When she faces a crisis, she will tackle them head on without feeling sorry for herself. She tries to make the best out of any situation. Her mother's scandalous affair and the betrayal of her fiancé scar her. Myung-ji's vindictive acts towards her and her financial plight... But she rises to the occasion and stays strong as she hits rock bottom in her life. No matter how hard her life is, she controls her emotions with steely determination.

He is the eldest son of President Yoon. He's cynical and has a reserved personality, masking his feelings. He grew up lonely and without any caring love because his mother passed away early in his life, But he is a sentimental person who craves love. On the surface, he's a very cold person but deep down he is compassionate and warm. Though he is the eldest son, his half-brother, Seok-bin, receives all the attention in the family. Since he is very sensitive about how people perceive him as the son of the president, he particularly dislikes people who are arrogant. He lives with guilt that he caused his sister's paralysis in a car accident. He doesn't get along with his siblings or stepmother and withdraws from them. Since his family is wealthy, many girls are attracted to him and he has the image of a playboy but he has never fallen in love with any of them. When he connects with Hyo-eun, he finds love for the first time and grows into a real man

She is the adopted daughter of Chairman Seo and Hyo-eun's younger sister. She grew up with a competitive spirit, as Hyo-eun was a straight-A student in high school and much loved by her own mother. She disliked the fact that Hyo-eun got accepted to a better college than her when she received expensive tutoring for the written exams. She also hates it that her mother dotes on Hyo-eun as much as she does on her. While working in the same design division as Hyo-eun, she is irritated that Hyo-eun gets more attention as a better designer. Full of ambition, she is very competitive and does not settle for second place. She is a blunt-speaking person who has a terrible temper when she gets angry. Though she didn't get excellent grades in school like Hyo-eun.

He is the second son of President Yoon. His mother is the second wife of President Yoon and many people regard him as the true successor to his father's business. Disinterested in management, he works at a law firm but his mother has high expectations for him. When his sister commits suicide, it cuts his heart like a knife but later on he marries Seo Myung-ji, who caused his sister's suicide, and his life becomes a series of missteps and heartache. He has a cynical side but he is a devoted partner...