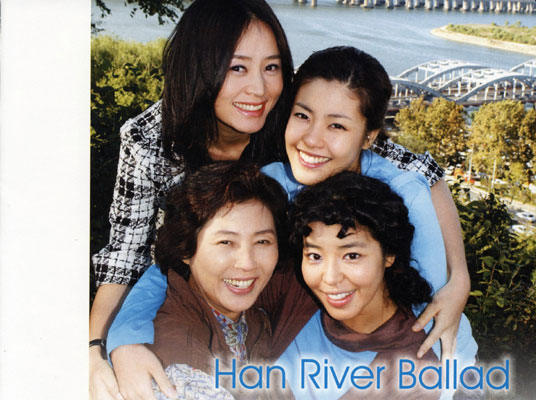 "Song of the Han River" is a story of life and love involving a vibrant middle-aged woman, her two daughters, a niece, a nephew, and a cast of other characters surrounding them. The woman, named Kim Young-hee, is a widow who sells fish to support her family. Through their often turbulent lives, we are able to experience the difficulties of a not uncommon family and the persistence of the love its members have for one another.

MBC TV's new weekend drama, "Song of the Han River," revolves around the lives of a vibrant middle-aged woman, her two daughters and a cast of other characters surrounding them. Like your mother back home, who would take a switch to you if you were bad and give you a pat on the back when you were feeling down, "Song of the Han River" is a warm but enervating story of ordinary people dealing with the normal difficulties of life. To bring about a sort of renaissance in MBC's weekend drama offerings, "Song of the Han River" ambitiously reunites the team of Kim Jeong-su and Choi Jong-su from the popular MBC drama "You and I" for the first time in 6 years.

Planning and preparations for this new presentation were undertaken from last May, and the target audience ranges from those in their early 30s to those in their 50s. Producer Choi Jong-su revealed that his intention was to create a drama dealing with a variety of characters. "Song of the Han River" also portrays the linkage between the past and present by making use of the Han River as a central theme. Throughout its entire length, this new drama portrays a range of Korean emotions and sentiment, and particular care was taken in casting so as to attract young viewers in addition to the targeted middle-age group.

The title comes from the eponymous theme song, "Song of the Han River," originally a folk song that has been re-cut with an upbeat modern feel by the group The Bubble Sisters. Work is underway however, to connect the mood of the song's original version with the drama's overall feel, and it will be interesting to see just how this is accomplished.