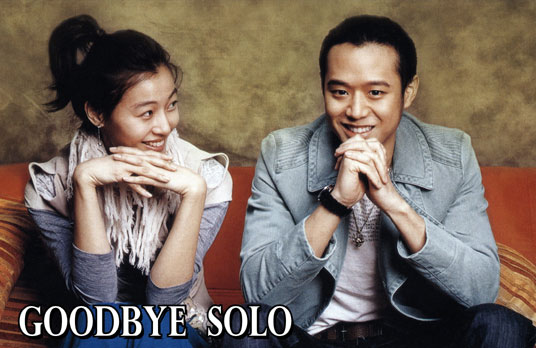 For KBS Wallpaper from this drama : http://www.kbs.co.kr/drama/goodbyesolo/report/paper/index.html

For KBS Photo Gallery from this drama : http://www.kbs.co.kr/drama/goodbyesolo/report/photo/index.html

Synopsis "Each of us is precious as the way we are."

This drama attempts to send a message that any human being is beautiful by just existing in this world. People’s desire to have their say in everything, to succeed and to be beautiful stems from their deep-rooted disbelief in themselves. They are unable to love themselves the way they are. The underlying reason of the loss of interest in life is the disappointment with people. But even those who get disappointed with other human beings are negligent in loving their own selves.

The main character, Kim Min-ho (played by Chun Jung-myung), was born into a family of a business tycoon but his family turned away from him because he was an illegitimate child. While having a hard time because of her mother’s re-marriages, Chung Soo-hee (played by Yoon So-yi) falls in love with Min-ho, who turns out to be a friend of her boyfriend, Yoo Ji-ahn (played by Lee Han). Frivolous Choi Mi-ri (played by Kim Min-hee) loves timid gangster Kang Ho-chul (played by Lee Jae-ryong), and agonizes a lot over her lack of self-confidence. Oh Young-sook (played by Bae Jong-ok) calls herself “crazy” and disguises herself in a lie. All these people are linked together by the mute owner of an eatery in the neighborhood, an old woman named Mi-young (played by Na Moon-hee).

Kim Min-ho: A high school classmate of Mi-ri’s, Min-ho works as a waiter at the cafe “Sky.” This outgoing, mischievous and talkative guy looks shallow on the outside, but deep inside he has a heart of gold. Three years ago he left his home and family – his father, who owns a construction business, his successful older brother, and his beautiful mother.

Chung Soo-hee: Soo-hee thinks of herself as cold-hearted and selfish, but in reality she is enthusiastic about everything she does, though a bit dull in love. She has no control of her strong feelings for Min-ho.

Kang Ho-chul: Despite his small frame, Ho-chul used to be an unrivaled gangster in his neighborhood because he thought being a bad guy was fun and manly. But now he is determined to live his life properly.

Yoo Ji-ahn: A boyfriend of Soo-hee’s, Ji-ahn is smart and savvy. He lives with Min-ho and has earned trust from Min-ho’s father’s firm. He thinks that betrayal is not a problem as long as he can alleviate the financial woes of his mute parents and younger brother.