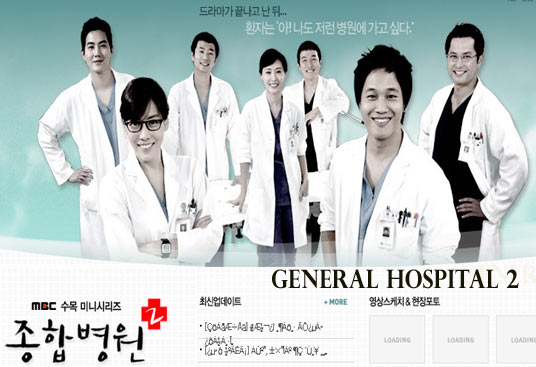 A young woman passed the bar examination so that she could become a lawyer who helps patients in malpractice cases decides to join a residency after she completes her internship. Then there is the passionate man who is dedicated to saving lives even though he graduated at the bottom of his class in medical school. This drama revolves around the lives of these two people who are 3rd year interns at the same hospital as they mature in their careers.

The drama will show the camaraderie among fellow doctors and the tensions and relationships that develop in their lives as they work hard to cure patients. Their personal challenges and down-to-earth qualities will warm the hearts of viewers.

His mother who works at a ranch wishes that he'll become a professor at medical school but during his six years of medical school and first year as an intern, he constantly got into trouble and his grades were at the bottom of the class. When he joins the residency, his fellow colleagues are Hyun-woo, who was always at the top of his class, and Ha-yoon, who passed the bar examination. At the outset, he faces a tough situation. He lacks in every way as a doctor but he'll go to great lengths to save a patient's life.

After passing the bar examination upon graduating from law school, she decides to join the residency program at a general hospital as a way to prepare herself to become a lawyer who specializes in malpractice cases. With memories of her dad who died from a botched operation, she is compassionate towards patients and has a critical view towards doctors who compromise their values. But while working with her colleagues, she gradually becomes a doctor in her own way and her views also change.

In medical school, he was the top student and Ki-tae recruits him to join the medical research team. He's an impassionate thinker but he does have a good heart. When Ha-yoon needs help in finding a kidnapper, he does his best to track down the criminal. He develops feelings for her as he helps her in every way he can.

She helped Jin-sang whenever he got in trouble during medical school. During exams, she would share her notes with Jin-sang. But Jin-sang is not aware that she has a crush on him. Though she is glad that Jin-sang is showing himself to be a promising doctor, sshe starts to get worried when Jin-sang and Ha-yoon keep getting into petty arguments...

After working for just one year in his residency, he is asked to join the medical staff as a staff doctor. He was once a handful but now he mentors younger doctors. He has a warm heart and one time, he left in the middle of a demonstration for a $20 million state-of-the-art medical device to operate on a patient in the emergency room. He's a doctor who is dedicated to his work of saving lives and that means he is not so keen on advancing his career.

Having the right connections, he's a star doctor at Sungui University Hospital who is admired by his peers for his skills. Although he is one of the top surgeons in Korea, he selectively chooses the patients he'll operate on to keep his career unblemished. He becomes the head of a medical research team that is supported by the hospital and becomes adversaries with Do-hoon who has different principles.

As a senior doctor at the ER, where there's always an emergency happening, she is a skilled surgeon who makes quick calculated decisions. She is a perfectionist at work but also has a softer side that she reveals when she's around Do-hoon.