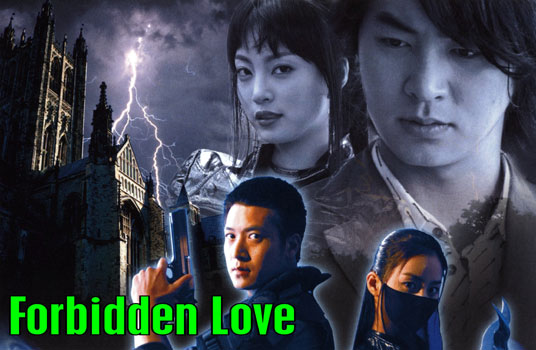 For KBS Wallpaper from this drama : http://www.kbs.co.kr/drama/gumiho/art/paper/wallpaper.html

For KBS Photo Gallery from this drama : http://www.kbs.co.kr/drama/gumiho/art/photo/photo.html

This drama series was produced with a hope of bringing the young generation back to television as it successfully combines the elements of action horror with those of a tragic melodrama. "Forbidden Love" depicts a fight between two different species: humans who at times act inhumanely, and non-human creatures who can be more compassionate than human beings.

This drama is based on a legend about a fox with nine tails that loves humans but is eventually betrayed by them. While presenting the modern version of a tragic love between a human and a fox with nine tails – two species that can never coexist, this drama also tackles such contentious issues as the moral aspect of genetic manipulation, social and economical costs associated with a longer lifespan, and human cloning.

Min-woo is a special human agent whose mission is to destroy foxes with nine tails. Along the way, he falls in love with one of the foxes, Shi-yeon, and becomes friends with other foxes as well. But when his human friends and even his younger sister get killed by those foxes, he begins to hate this species. Min-woo is naturally a warm-hearted, outgoing man.

Mu-young is one of the most powerful foxes with nine tails and is likely to become the next chief. He is a typical leader who is adept not only at fighting but at managing his group members as well. He is intelligent, taciturn and never opens his heart to others. He goes through hell watching how his beloved Shi-yeon falls in love with a human being.

Chaei-yi is the only fox with nine tails that can change her appearance. As a sexy and pretty woman, she is adored by men, but her only love is Mu-young. Aside from Shi-yeon, she has another obstacle in winning Mu-young’s heart – the man who she loves so dearly is the son of the man who ruined her family.

"Forbidden Love" suggests a new "fusion culture" idol – a non-human creature with a human-like appearance who is more talented, beautiful and compassionate than human beings. This drama aims to win popularity not only from the young audience but from middle-aged viewers as well by creating a new character through a dramatic depiction of the predestined connection between the two enemies -- foxes with nine tails and human beings -- and the formation of a new conflict structure.

"Fusion drama" has emerged as a new code that can appeal to various age groups of viewers through diverse genres and stories. A Fox With Nine Tails gave birth to a new legend by overturning the existing perception of foxes with nine tails, and created a sensation by introducing a novel storyline and showing off top-notch filming techniques. What's more, its characters have become the new icons of the "wanna-be" culture.

"Forbidden Love" is the first Korean TV drama that depicts the passionate love between a human being and an alien species through cutting-edge technologies that make the tragic love between the characters ever more dramatic and heartrending.